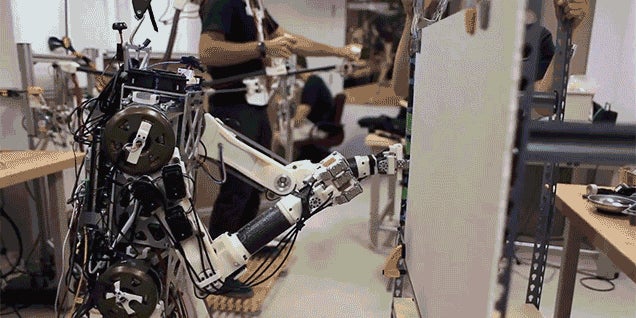 Creating a humanoid robot that's as agile and fast as an adult human — not a toddler — is a huge challenge as the recent DARPA challenge illustrated. So researchers at MIT have designed a robot that acts more like a puppet, relying on a human operator for dexterity, speed and balance.

You can think of this robot as similar to the unmanned flying drones the military uses that are piloted by a human from a safe and remote location. The bot can go where humans can't, like inside a nuclear reactor post-meltdown, and perform repair and rescue operations in environments that are deadly to those of us made of skin and bone.

MIT's robot wouldn't be going in there alone, though. It's completely dependent on a human operator wearing a suit and a pair of LCD telepresence goggles so it sees everything the robot does. The movements of the operator are translated to the robot through the use of a complex suit, which is how the bot is able to move so fluidly, and with impressive accuracy and dexterity. 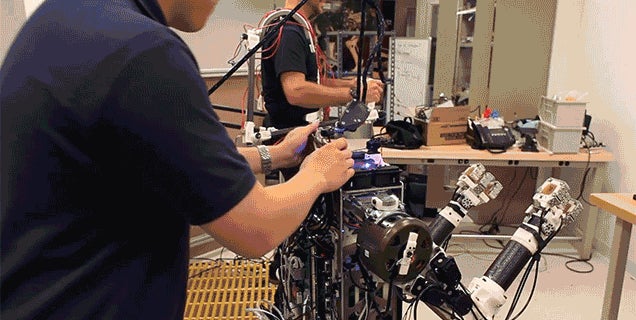 But the suit the human operator wears has an added feature: a kind of force feedback so they can feel the forces being exerted on the robot and help it counteract them and stay balanced. If they feel the robot leaning too far to one side because it's just stepped on some uneven terrain, they can quickly lean in the opposite direction so it doesn't fall over.

The setup gives the robot the same lightning-quick reflexes as a human, without the need for an additional 10 years of robotics research to replicate that with an artificial AI. In its current state MIT's new robot is far more capable than a fully-autonomous humanoid like ATLAS is. And since a human is making all the split-second decisions, rescue efforts won't be hindered by the bot tripping on an uneven floor and falling over like a child.