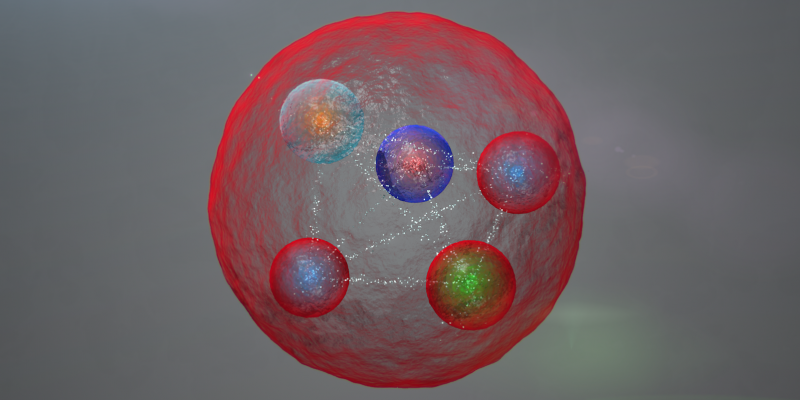 After restarting to run at higher power than ever, the Large Hadron Collider has made its first proper discovery. Today, a team of scientists announced that they have found a new class of sub-atomic particles known as pentaquarks.

Quarks are a series of charged sub-atomic particles that come together to form larger particles — such as protons and neutrons, which are each made of three of the things (a class of particle referred to as baryons). First proposed in 1964 by American physicist Murray Gell-Mann, their existence changed the way people thought about particle physicists.

But quarks can come together to form other entities, too. For a long time, people have speculated that another class of quark ensemble, called the pentaquark, could in theory exist. The pentaquark is, perhaps unsurprisingly, supposed to be made up of five smaller entities — four quarks and an anti-quark. Now, for the first time, researchers working on the LHCb experiment at the Collider have found evidence for their existence.

"The pentaquark is not just any new particle," said Guy Wilkinson from the LHCb in a press release. "It represents a way to aggregate quarks, namely the fundamental constituents of ordinary protons and neutrons, in a pattern that has never been observed before in over fifty years of experimental searches. Studying its properties may allow us to understand better how ordinary matter, the protons and neutrons from which we're all made, is constituted."

The team has identified the existence of the pentaquark by watching for the decay of a baryon known as Lambda b. As it split up into three well-known particles — well known to physicists at least: a J-psi, a proton and a charged kaon, if you're keeping track — the scientists observed a transition state in which two previously unobserved particles could be identified.

"Benefiting from the large data set provided by the LHC, and the excellent precision of our detector, we have examined all possibilities for these signals, and conclude that they can only be explained by pentaquark states", says LHCb physicist Tomasz Skwarnicki in a press release. "More precisely the states must be formed of two up quarks, one down quark, one charm quark and one anti-charm quark."

Now, the scientists will study study the finer structure of the pentaquarks, to understand exactly how they're bound together. It's not the dark matter that CERN researchers are eventually hoping to find with the newly high-powered Collider, but it's still another milestone in particle physics.