The Cave Holding Evidence Of Humanity's First Culture Is Under Threat 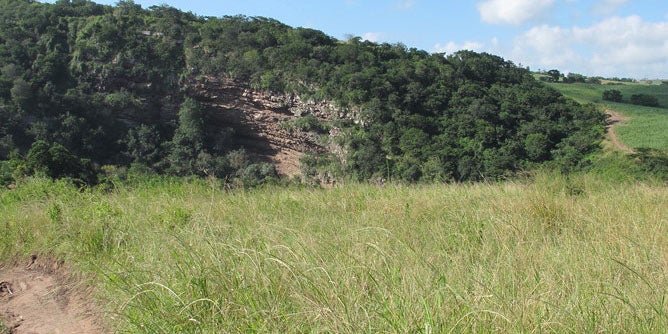 Sibudu, a rock shelter above the uThongathi River in KwaZulu-Natal, is one of South Africa's most important archaeological sites. Its recent nomination for World Heritage status demonstrates that it is of universal value, with heritage that belongs to all humanity.

But a housing development has been approved next to the rock shelter, threatening the fragile archaeological site. The fate of the cave has drawn global attention with international scientists and scientific associations offering to help support its survival. For South Africans, the site creates tensions between a desire to save a precious heritage site and the sensitive issue of providing homes for the poor.

Why Sibudu deserves to be preserved

The ancestors of all humanity evolved culturally at sites like Sibudu. Early modern humans developed complex thought patterns and symbolic behaviour in southern Africa. Among its prolific finds, Sibudu has some of the earliest examples in the world of sea-shell beads, a wide variety of bone tools, bone arrowheads for hunting, use of herbal medicine, and preserved plant bedding — all about 70,000 years old.

Archaeobotanists have identified seeds and charred wood from trees not found in the area today, and some plants that are valued for their medicinal properties. This establishes the antiquity of South Africa's profound indigenous knowledge. Hunters brought the remains of many animals including extinct giant horse and buffalo to the shelter. It is therefore an environmental as well as a cultural archive.

Recently, chemical and protein analyses identified a mixture, probably from powdered red ochre mixed with wild bovid milk. This may have been body paint or something for decorating clothing or objects. The site is well-dated and has large collections of stone tools.

Between 1998 and 2011, Wits University directed the excavations, and since 2011 excavations have been directed by a German university.

The UNESCO document of July 2013, the Operational Guidelines for the Implementation of the World Heritage Convention, defines a World Heritage site thus:

The cultural and natural heritage is among the priceless and irreplaceable assets, not only of each nation, but of humanity as a whole. The loss, through deterioration or disappearance, of any of these most prized assets constitutes an impoverishment of the heritage of all the peoples of the world.

There is a considerable contradiction between South Africa's national nomination of Sibudu as a World Heritage site and the provincial granting of development rights nearby.

A South African development company plans to build on sugar cane fields which it owns. The KwaZulu-Natal Department of Economic Development, Tourism and Environmental Affairs has authorised the building project. A low income subsidy housing estate with approximately 370 homes will be built on about 32 hectares within 300 metres of the centre of Sibudu.

Archaeologists are concerned about the effects of an increased footprint at the site because its dry, loose sediments are located on a slope and are susceptible to damage by trampling.

Other archaeological sites have been destroyed or heavily vandalised when housing developments were built nearby. Peers Cave in the Western Cape is an example. People perceive it as a secret area within a public place, where they can hold unnoticed parties or meetings. Fencing is an unsatisfactory option. Experience elsewhere suggests that intentional exclusion of people causes curiosity and invites vandalism.

The most sustainable way to protect archaeological sites is to have caretakers who see them as resources. If Sibudu becomes a World Heritage site, there will be full-time custodians. If wisely cared for, it can become an important archaeo-tourism destination and educational centre. A site museum and theme park could be of economic benefit to the local community.

When deciding on a course of action, South Africans must be cognisant that Sibudu cannot be moved in order to preserve it. It also has a non-renewable heritage resource that is only ours for as long as we cherish and protect it.

Lyn Wadley is Honorary Professor, School of Geography, Archaeology and Environmental Studies at University of the Witwatersrand.