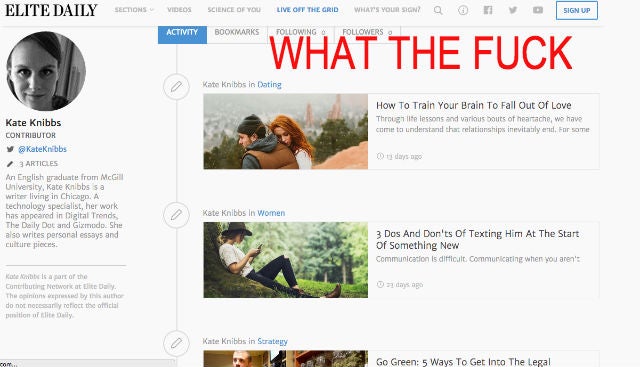 My online reputation has the digital equivalent of an STI. A few weeks ago, I found out I was getting impersonated on the internet. My mysterious usurper did his homework, bogarting my photos and biographical details to publish blogs under my byline at Elite Daily.

I found out I was being impersonated at a party. A friend's girlfriend had seen my name on Elite Daily, and was so weirded out that she had saved the URL to show me. After I traced my impostor to an email address and confronted him about it, he gave me major attitude. "I knew you'd pull that shit," he wrote.

He also revealed that he was pulling the scam on hundreds of other writers. 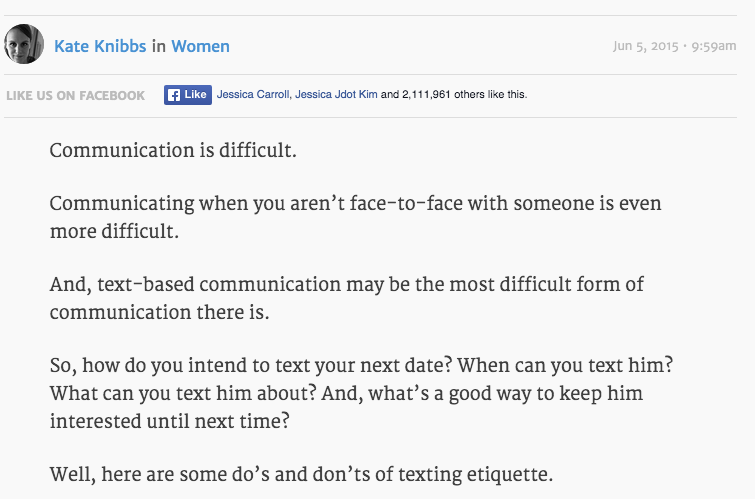 should i seppuku myself

Elite Daily, which bills itself as "The Voice for Generation Y", is a cynical content farm, alternately treacly and fratty. Editor-in-chief Kaitlyn Cawley described its readership like this in 2013:

"Elite Daily is for this generation's alpha," Cawley wrote, "the equal opportunity arsehole, with an amoral sex life and desires to succeed in the traditional ways: retiring with off-shore bank accounts, to a yacht full of naked bitches (of either sex) on some distant Oceanic island."

When I found out I was being associated with a gyre of aggressively smarmy pablum, I emailed Elite Daily to ask why it was publishing stuff under my name. The Elite Daily team said it needed to see government-issued ID to respond to my request, otherwise they couldn't be sure if I was the "real" Kate Knibbs. Once they decided I was not reverse-catfishing them, the Elite Daily team was courteous, and changed the byline on the articles to "Kate." They replaced my photo with a stock image of some lady doing yoga.

But I still wanted to know who was jacking my identity to post vacuous drivel. 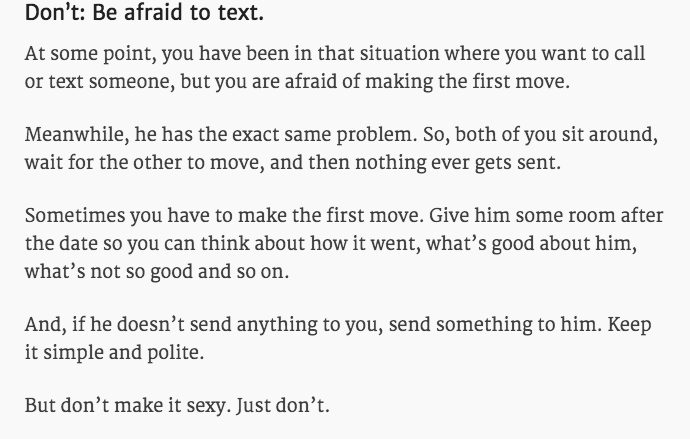 I asked if Elite Daily could help me find the person impersonating me. "Unfortunately we're not able to give out other people's email addresses," a PR person emailed me.

I talked to the Gawker Media legal team, which also contacted Elite Daily. Elite Daily said it was not able to give me the impersonator's email address, but they gave it to our lawyers. So I emailed [email protected], the email address my impersonator used. I asked who they were and why they were doing this to me. I didn't really expect a response.

A few days later, I got an email from someone who goes by the name Khurram Aziz:

I randomly picketd a journalist's name that came up in Google News to get a writer account on a high profile site so as to post spam links into articles for customers willing to pay a lot of money for the service.

I've burned through hundreds off accounts and your name is now void. I apologies for any distress or distrubrance.

I asked Aziz some follow-up questions: How often had he done this? Was he working alone? How much dough was he making from this scheme? Did he want to give me his side of the story before I wrote about it?

I researched him online: Aziz describes himself as a "trained journalist and web entrepreneur" on a website called Sitepoint. His articles are stuff like "How To Negotiate a Higher Freelance Rate" and "5 Security Essentials for Ecommerce Sites." None of his posts offer tips on how to get rich by impersonating reporters. He also touts himself as a news editor at Intellectual Property Magazine, which is rich.

Whatever moral itch made him write me the first time died, and he wrote back this surly response:

There's an entire cottage industry online for making money by sharing links. Aziz advertises within this market, offering a content writing service as well as link spamming. "We guarantee originality," his ads promise. 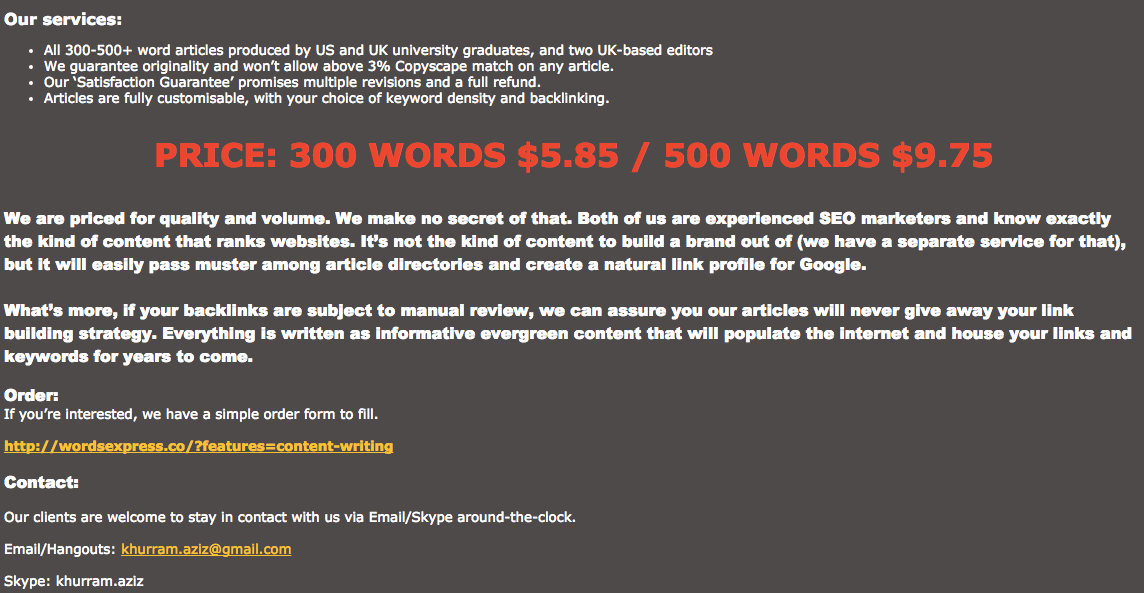 I don't know exactly how many other people he has pulled this on, but by his own admission it's hundreds, and I doubt he's the only dude in the game. He only made my name "void" because I complained, which means he's still actively making other writers look like jackasses on shitblogs.

His name probably isn't Khurrum Aziz. When I pressed him further, he got even surlier, teasing me that he'd stolen the identity he was using:

It makes sense that a serial identity thief would cloak his identity, but whoever it is running the "Khurram Aziz" Gmail account has been busy. In addition to scamming me and hundreds of others, he's been posting online as "Khurram Aziz" for at least two years using that Gmail address to talk with editors, as one of his previous editors confirmed with me.

I still don't know if there's another layer of subterfuge going on and if the real Khurram Aziz is getting even more screwed than I did. Either way, I'm just one of many other writers who have been impersonated. Who knows — there could even be some other you out there with a prolific output on ViralNova.