It Turns Out That The US' GMO Warning Labels Didn't Work 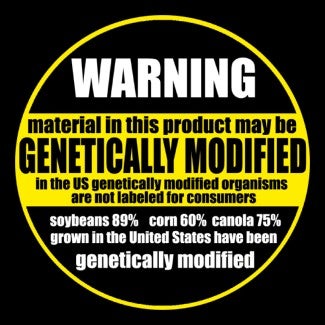 The US has seen widespread campaigns to warn them against the horrors of frankenfood by putting GMO labels on cans, but a new study shows that even when food has GMO labels, nobody cares.

Groups who oppose GMOs have pushed governments to put warning labels on food that explain it has been genetically modified. The idea is that consumers will vote against GMOs with their wallets, and the market will kill the practice of genetically modifying our food. But now a new study shows that people couldn't care less about GMO labels, and that they basically have no impact at all.

University of Vermont economist Jane Kolodinsky studied people's beliefs about GMOs both before and after labelling. She did the work in her home state of Vermont, where GMO labelling was mandatory. What she found was that GMO labels didn't change people's minds about whether GMOs were dangerous or not. Though activists believed that seeing GMO labels everywhere would cause consumer outrage, or at least opposition to the practice, instead it appears to have left consumers indifferent. Few seemed to think of GMOs in a negative way, even after seeing the label.

Said Kolodinsky in a release about the study from University of Vermont:

When you look at consumer opposition to the use of GM technologies in food and account for the label, we found that overall the label has no direct impact on opposition. And it increased support for GM in some demographic groups. This was not what I hypothesized based on the reasoning behind the introduction of The Safe and Accurate Food Labelling bill. We didn't find evidence that the labels will work as a warning.

Kolodinsky discussed her research just after the U.S. House of Representatives passed a bill that prevents states like Vermont from requiring GMO labelling. And her research suggests that it doesn't matter either way — label the food or not, consumers don't care.

[via University of Vermont]