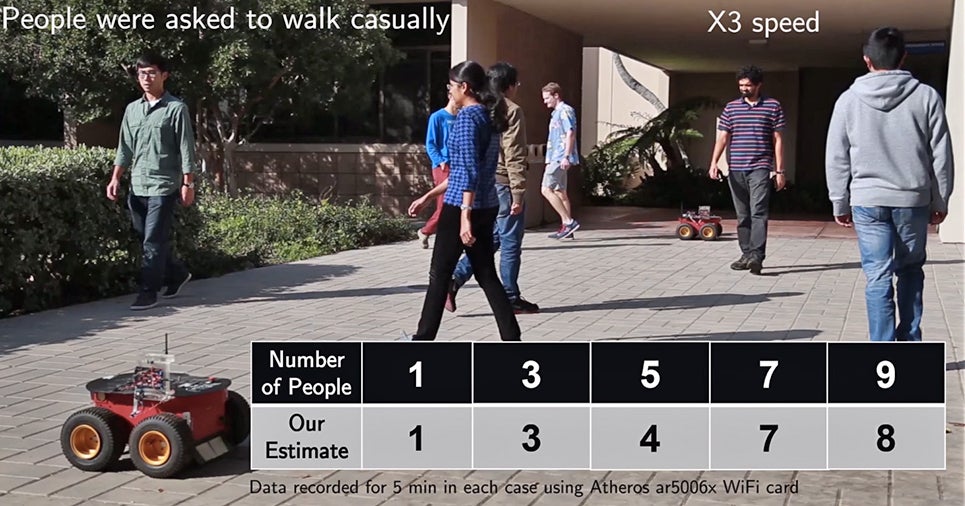 Using a similar approach that allowed MIT to see through walls using just Wi-Fi signals, researchers at the University of California, Santa Barbara, led by Yasamin Mostofi, have found a way to count crowds of people — with a surprising degree of accuracy — using just basic Wi-Fi hardware.

But the technique doesn't involve just keeping tabs on how many smartphones, laptops or tablets connect to the wireless network as people pass through it. That tech is only able to count persons carrying a connected device with Wi-Fi turned on, which isn't particularly accurate.

This new approach uses a pair of Wi-Fi cards placed at either end of a space that's roughly 70 square metres in size. As the two cards speak to each other over Wi-Fi, they're able to determine — using some clever analysation and lots of complicated maths — when the signal drops as a result of a person passing between them, or when the signal is boosted as a result of bouncing off someone.

It's the intelligent processing of these dips and boosts in the Wi-Fi signal that allows this system to accurately count the number of people in a given space. It's even able to account for people who are milling about, criss-crossing the signal, with a surprising degree of accuracy in its final headcount.

And while the research might seem like a solution looking for a problem, given the saturation of Wi-Fi networks everywhere you go, it could be used for everything from automatically activating heating or cooling systems in a room based on how many people are in it, to monitoring foot traffic at a shopping mall to determine the prime storefront real estate. [University of California via Gizmag]