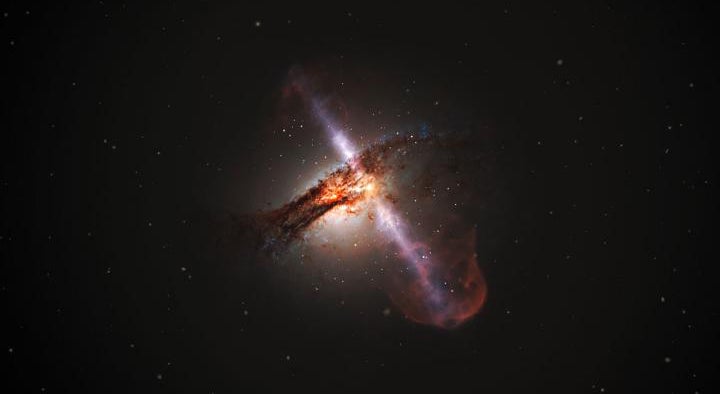 You'd probably get upset if somebody ran smack into you on the street, or plowed into your car. Whatever sort of fuss you'd raise, however, pales miserably in comparison to the epic cosmic scream of supermassive black holes when their host galaxies collide.

That's right: Galaxies sometimes bump into each other too, and when it happens, they tend to cause a colossal ruckus. That, at least, is the conclusion of a new study published in the Astronomical Journal, which found that supermassive black holes emitting near-light speed streams of hot plasma and radio energy are the result of galactic mergers.

Most galaxies are believed to harbour a supermassive black hole — a singular point of mind-boggling density and gravitational force — at their center. In many ways, these SBHs serve as cosmic lynchpins, steering the orbit of everything else in their interstellar neighbourhood. But despite SBHs' rap for swallowing matter and light, astronomers have observed a handful of black holes streaming luminous jets of hot plasma away from their centres at velocities approaching the speed of light. These plasma beams, which stretch thousands of light years in either direction, are also the origin of black hole radio waves. Huh.

To determine why some black holes shoot out cosmic lightsabers, the team behind the present study used the Hubble Space Telescope's Wide Field Camera 3 (WFC3) to conduct a sweeping survey of a huge number of galaxies, focusing on those with particularly luminous centres. They classified these galaxies into several groups: Two types with plasma jets, two types that had luminous cores but no jets, and a set of boring, inactive galaxies. The astronomers discovered that nearly all of the galaxies bearing large plasma jets and radio emissions were also in the process of, or had recently finished, merging with another galaxy.

While the study offers strong evidence that galactic collisions are a necessary precursor, for a supermassive black hole to actually fire its plasma sword, astronomers suspect additional criteria must be met, as well. The other ingredients needed to spark this particular astronomical light show are still being investigated, but if one thing's certain, it's that astrophysics has proven, yet again, just how insignificant our Earthly activities are on the cosmic battleground.