What You're Looking At Is An Insect Penis Inside Its Mate 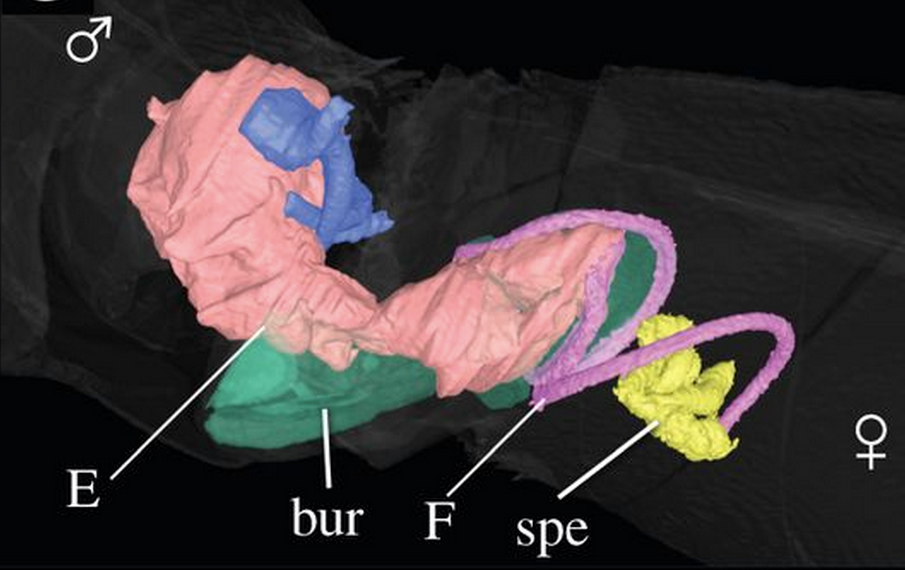 One of the biggest challenges for scientists studying the anatomy and physiology of genitalia is the fact that much of the real functional action happens deep inside females. It's hard to see what's going on in there. That's why I love studies that rise to the challenge of giving us a peek inside.

In a paper published this week in Proceedings of the Royal Society, B, Liam Dougherty and colleagues took a look at the inner sexual lives of seed bugs (Lygaeus simulans). After flash freezing a pair of mating insects in liquid nitrogen, the researchers took a series of X-rays through the pair, collecting high resolution images of both male and female genitalia and how they fit together. They then used 3D reconstruction software to perform a "virtual dissection" of the insects, illuminating structures that are often squished out of all recognition by normal dissection.

The image shows their results: in pink is the aedaegus, the insect analogue of the penis, sitting inside the female's bursa, or genital space, in green. The long, coiled tube that actually delivers sperm is in violet, and it's easy to see its spiral path as it twists through a tiny duct at one end of the bursa to enter the female's sperm storage organ, highlighted in yellow.

In the paper, the researchers are careful to point out that their virtual dissection isn't perfect: it leaves out very thin tissues and small details like the tip of the coiled tube. But as a step toward understanding how male and female genitals work together during copulation? Impressive.