These Box Jellyfish Use Their Sting To Anchor Sperm 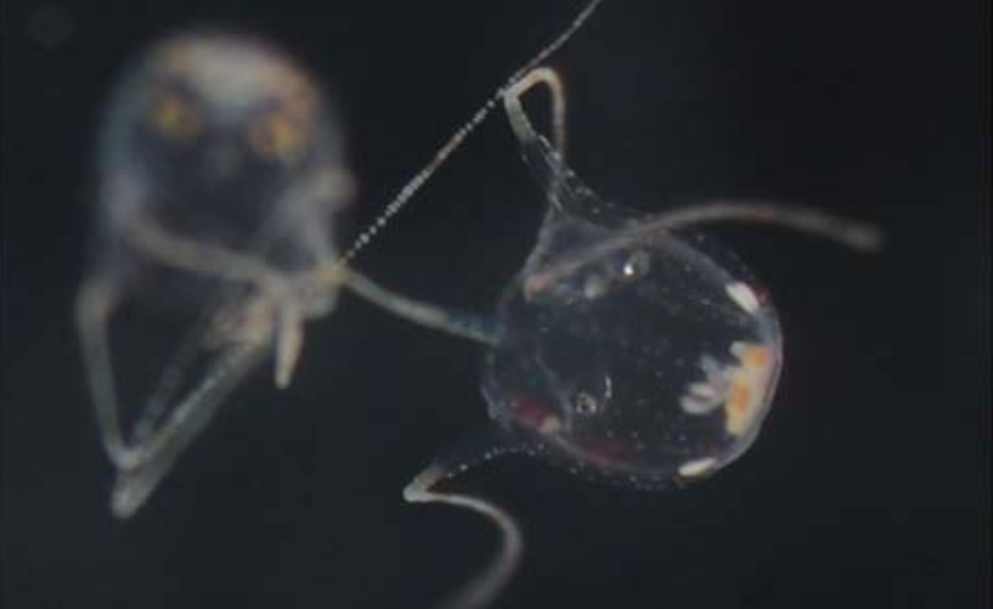 Box jellyfish are probably best known for their sting — the venom from a few species' nematocysts, or stinging cells, can kill a person. Nematocysts are usually found on tentacles, but a new study suggests that one species has made them an integral part of their sexual system.

Picture: Mating Copula sivickisi. The female is picking up the male's sperm packet with a single tentacle | Garm et al. 2015

In a paper appearing yesterday at the Journal of Morphology, Anders Garm and colleagues from the University of Copenhagen describe mating in the box jellyfish Copula sivickisi. Superficially, these animals' reproductive habits look a lot like their relatives': after a male and female grab one another with their tentacles, the male hands a package of sperm over to the female, who — because jellyfish have only one opening for both mouth and anus — eats it.

Here's where the weird stuff happens. According to Garm, the male's sperm don't break out of the packet and swim. Instead, the sperm packet has mature nematocysts which they think are activated when they touch the female's gonad — shooting out spikes that anchor sperm-filled tissue to egg-filled tissue.

It gets weirder. After the sperm package is stuck to the side of the female gonad, it's still exposed to the central cavity of the jellyfish, where digestion happens. The sperm package is no exception. As the package is digested, naked sperm nuclei are freed and, the researchers think, get absorbed by the female's gonadal tissue.

The female gonad also contains nematocysts, but they don't seem to be deployed during copulation or fertilisation. Instead, she seems to embed her gonadal nematocysts in the strand of embryos she lays, potentially, Garm thinks, protecting them until they mature. No one has ever seen nematocysts used in this way before, so a lot of the details are still uncertain. [Garm et al. 2015]