The Strange Second Life Of America's Only Rare Earth Mine 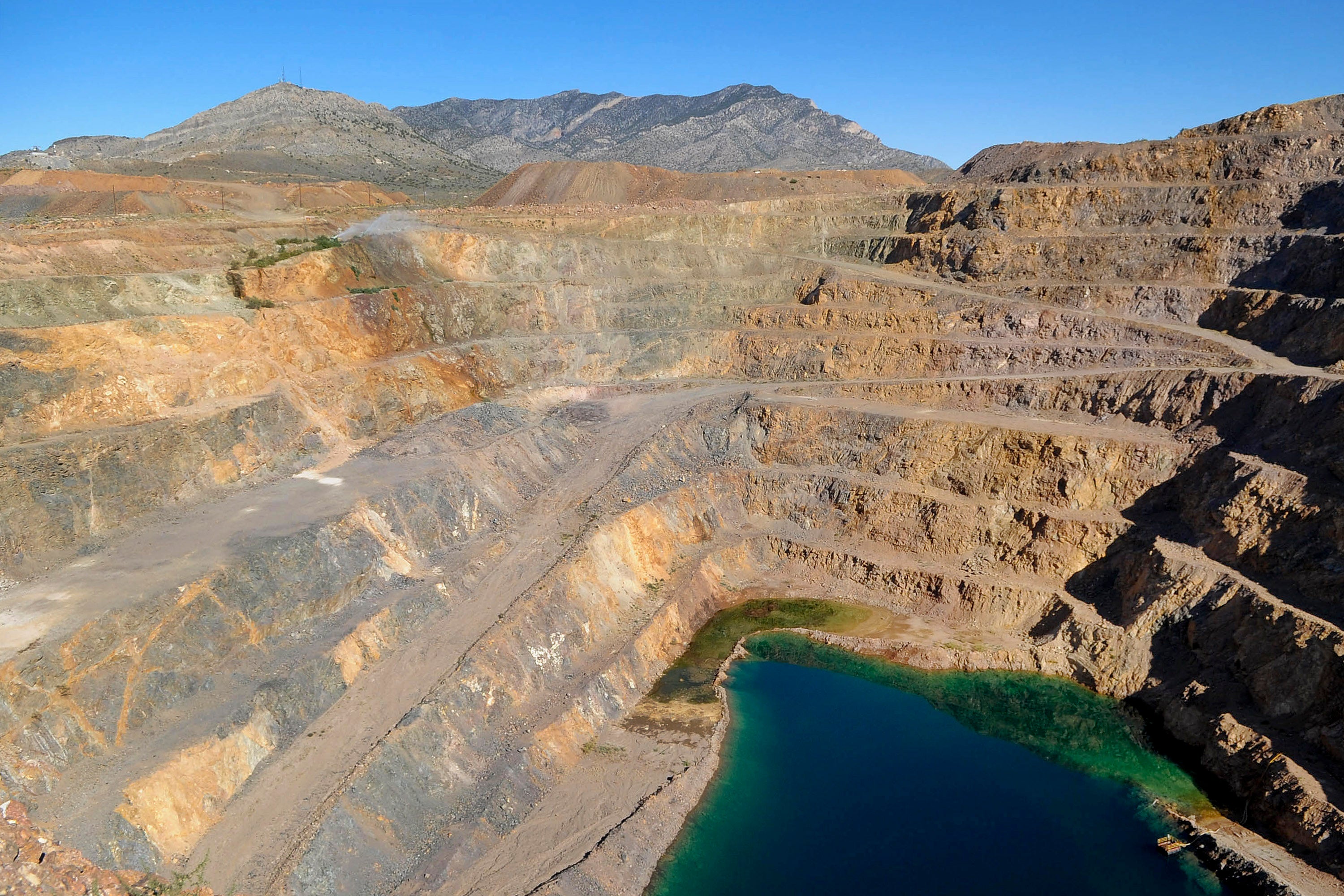 Rare earth elements are hard-to-find metals that we need for batteries, solar cells and electronics. These days, they're mostly mined and processed in China. But it wasn't always so. The history of rare earth elements is surprising, and some of it even takes place in America's backyard. In fact, there is still a rare earth mine in the US.

It's located on the eastern edge of California and for a time, it supplied most of the metals used in the world's electronics. And though it was shuttered in the 1990s, it's ramping up production again. And by doing so, it could radically change the supply chain behind consumer electronics.

There's Bastnaesite In Them Thar Hills

As a name, Mountain Pass is as generic as they come. The names for its claims hint at how remarkable it was, as though the churning of the Earth's surface had opened up the rock and accidentally exposed the 1.4 billion-year-old wealth inside, like pulling apart a venetian blind: Birthday. Sulphide Queen. Mineral Hill. Lucky Strike.

According to a 1954 report from the US Geological Survey, as gold in Nevada waned prospectors moved towards California. They were rewarded: Huge veins of gold and silver, enough that 500 miners had gathered in the area, supplied as much as $US5 million during the late 19th century. But by the turn of the century, USGS reported, "all that now remains of the principal town, old Ivanpah, about 8 miles (13km) north of Mountain Pass, are the walls of several adobe houses." 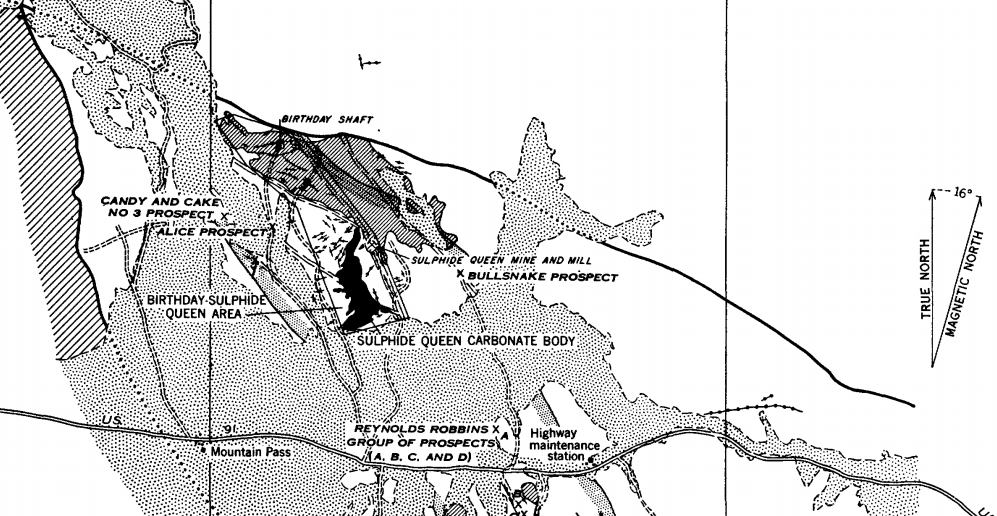 The area would remain sleepy and dormant until the late 1940s — as the world was giving birth to the nuclear age. In the late 1940s, a local businessman offered to equip a prospecting party with a Geiger counter to look for uranium or radioactive minerals.

"To their surprise, specimens of lead and gold ores from the Sulphide Queen Hill were radioactive," writes the USGS in its report. They had found a huge vein of Bastnaesite, a rare earth element that was discovered in the 19th century and is a source of the important element cerium — used to make everything from fluorescent lights to self-cleaning ovens. 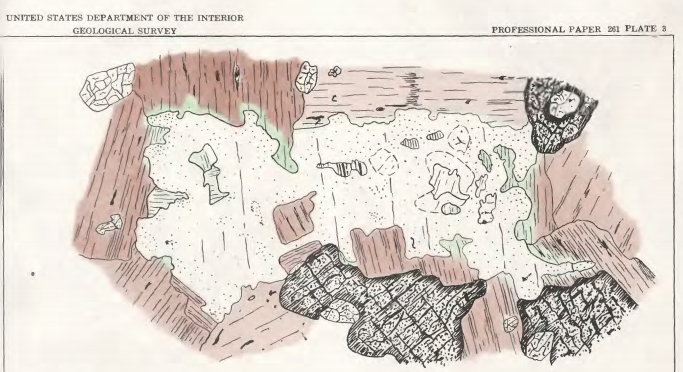 A field drawing from the USGS.

As the USGS noted, only ten other locations on Earth were known sources of the mineral. And crucially, it added, "several of the rare earths are excellent absorbers of slow neutrons, and their poisoning effect on the action of nuclear-energy piles has stimulated intensive study of the metals by the Atomic Energy Commission."

The era of Rare Earth mining at Mountain pass was born.

The Mine That Powered Modernity

In some ways, "rare earth metals" is a misnomer. The rare earth elements are chemical elements as well, 17 elements in all, which often exist embedded in rocks or minerals. The process of extracting them from ore is labour- and resource-intensive, and always has been.

Some of the miners who discovered the minerals at Mountain Pass formed a corporation called Molybdenum Corporation of America, and soon the company — today known as Molycorp — was supplying the rare earth metals the consumers of the burgeoning modern age demanded. Colour TVs, which use phosphors to produce brighter shades, depended on Molycorp. So did fluorescent lights. So did the polish used on screens, jewels, and ceramics. 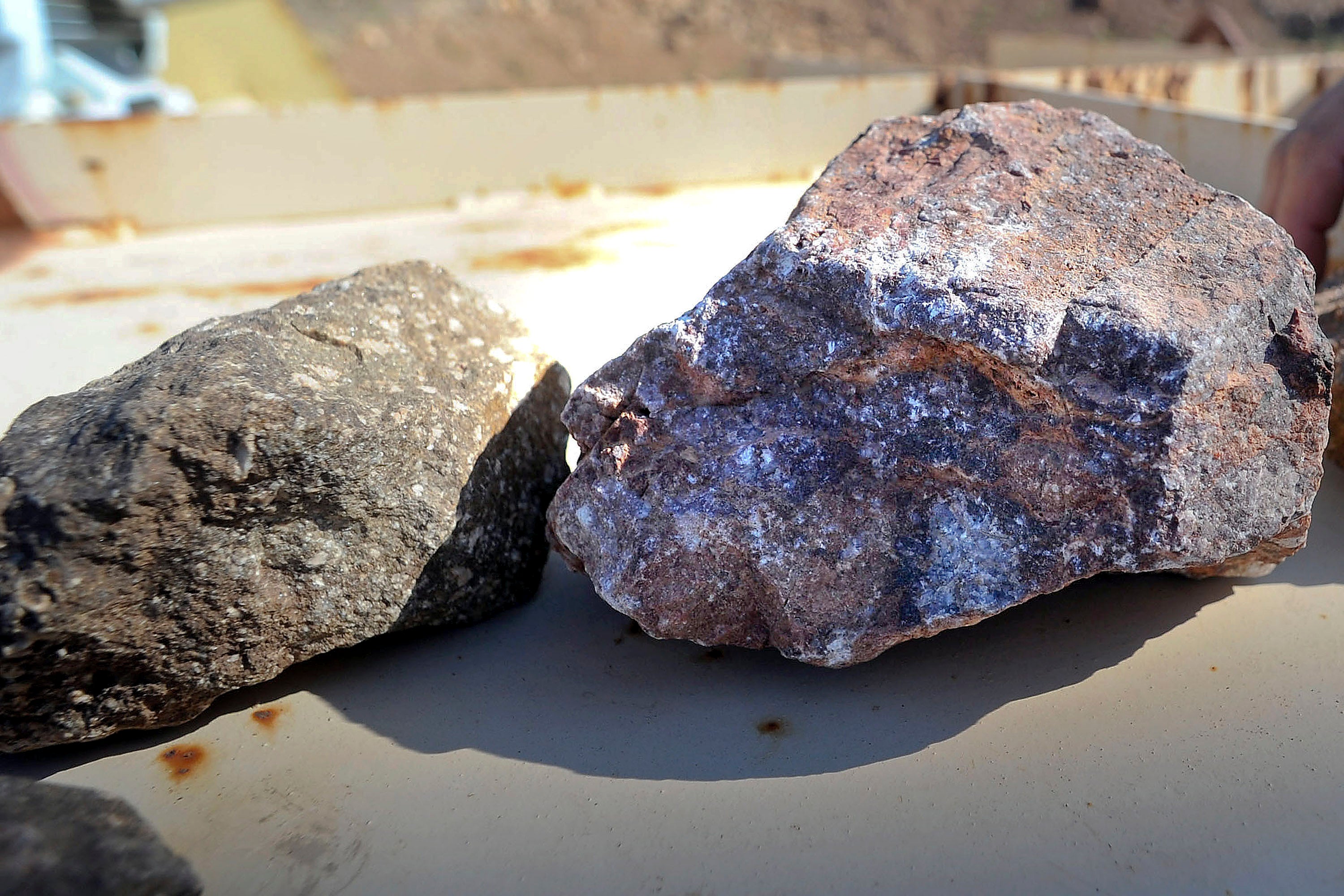 Ore from the Molycorp mine today. Jacob Kepler/Bloomberg via Getty Images.

But the demand for these obscure chemical elements, which took so much work to extract, was only growing. China's push to become a technological powerhouse had its geologists searching for its own rare earth deposits — by the 1980s, it had found them, mostly in Inner Mongolia. And by the early 2000s, it was producing more than 90 per cent of the world's rare earth elements.

Mountain Pass couldn't compete — and with concerns about the environment growing amongst Americans of the 1980s and 90s, it just didn't make sense to keep the mine alive. A massive environmental disaster in the 1990s saw toxic and radioactive wastewater from the refinery dumped into the natural landscape. Mountain Pass was shuttered in 2002. 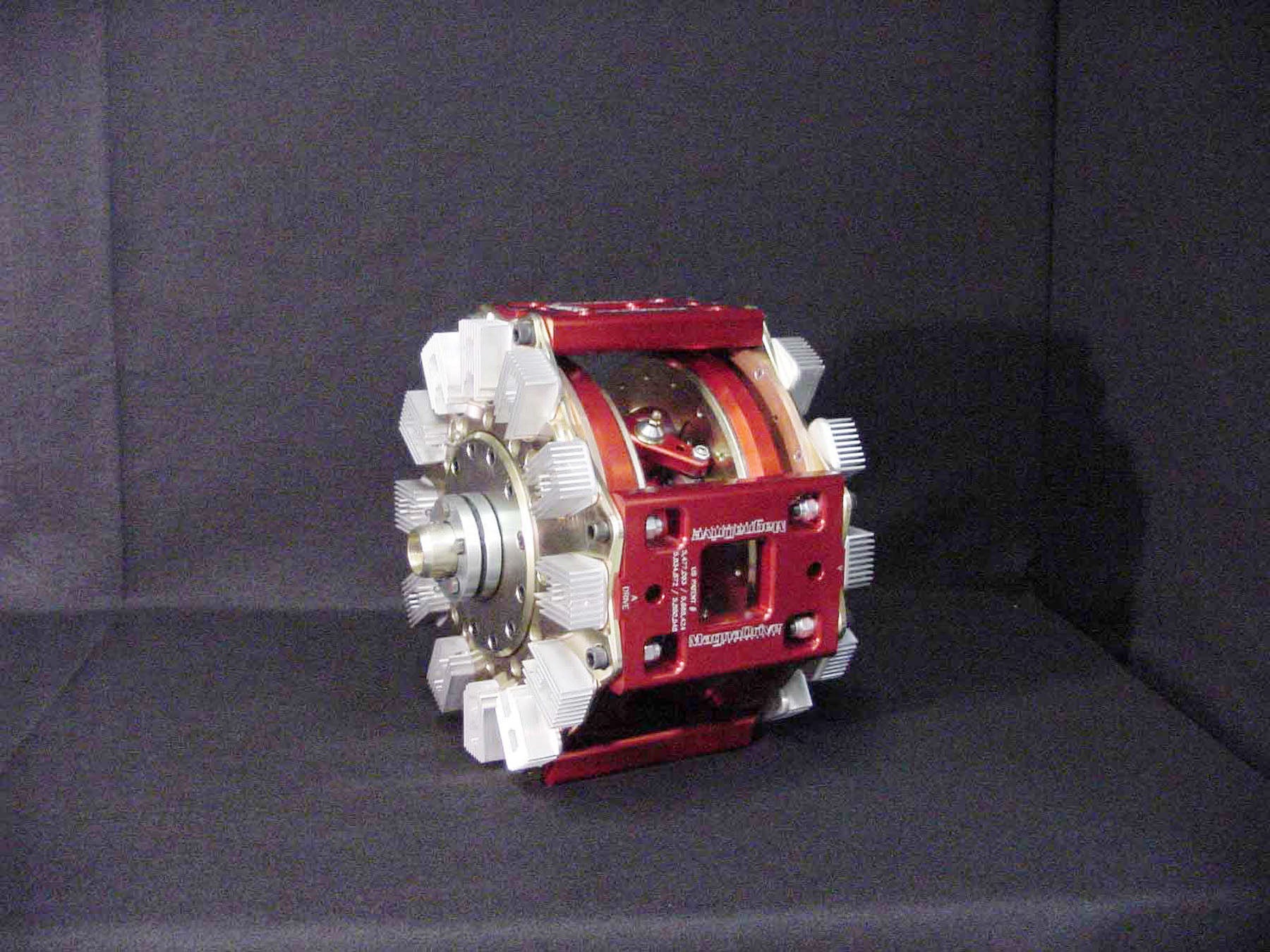 "A breakthrough technology for controlling the speed of motor-driven systems," writes a 2009 press release, using "the power of rare earth magnets..." PRNewsFoto/MagnaDrive Corp.

Meanwhile, rare earth elements quickly became a kind of shadow currency in the global economy. Nations could live or die by them. As our sister site io9 has described along with publications like Popular Mechanics and The Atlantic, they were powerful leverage in least one diplomatic crisis. With 97 per cent coming from China, they gave it a death grip on the technology that the rest of the world depended on.

So it was only a matter of time before other countries started looking for alternatives.

For Molycorp, that alternative was its very history. It has spent billions restoring Mountain Pass, replacing its extraction systems and securing the mines, all in order to ramp up production once again.

The idea, the company told Fortune, is to build a rare earth supply chain that does not produce the kind of horrifying environmental damage that other mines do. That means everything from using a process called chloralkali to use recycled water to separate the ore — less bad than chemicals, apparently — to generating power on-site. Then there's the question of what to do with the tailings, or the toxic waste that's left over when the tiny amount of rare earth elements are extracted. 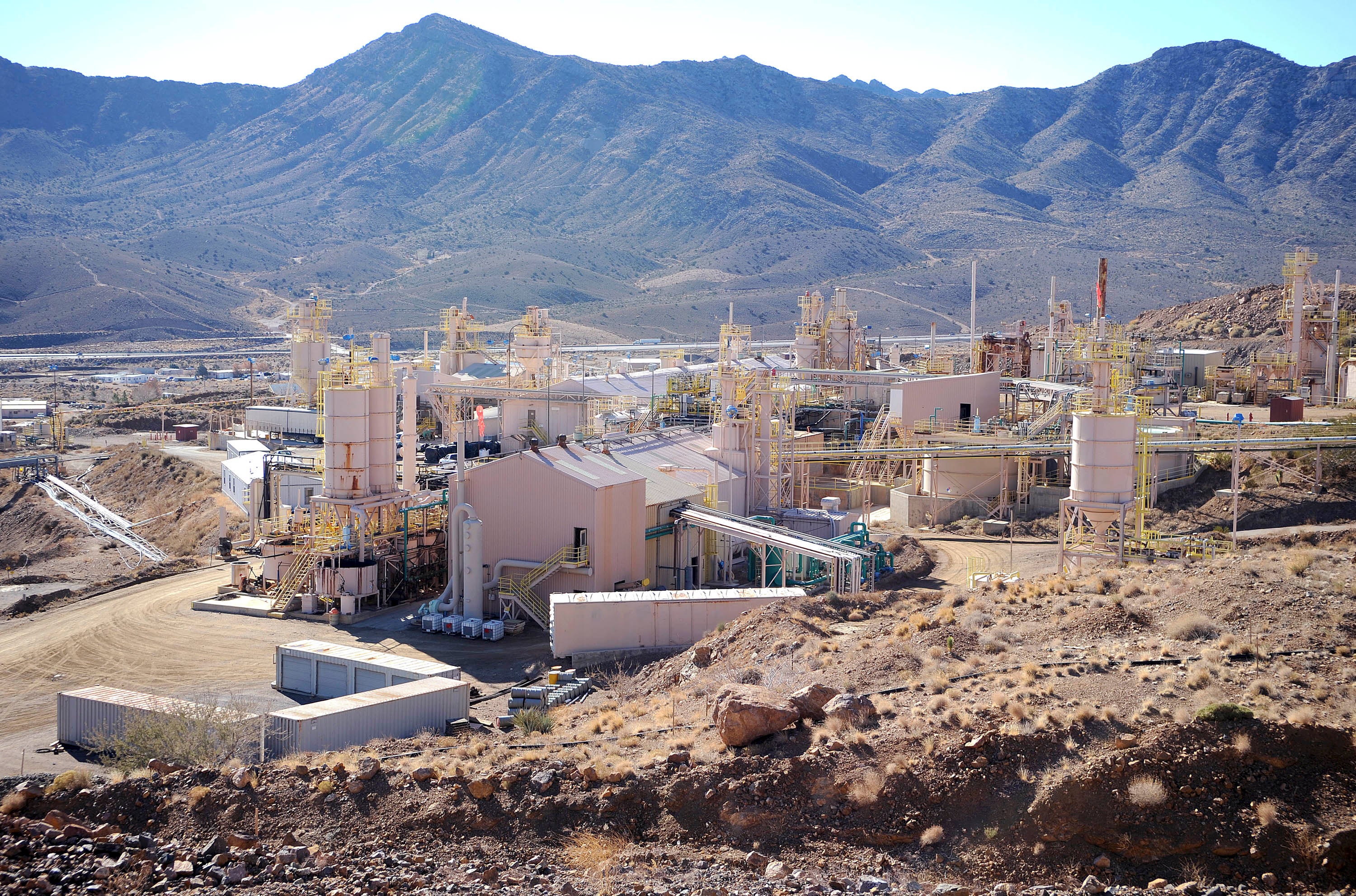 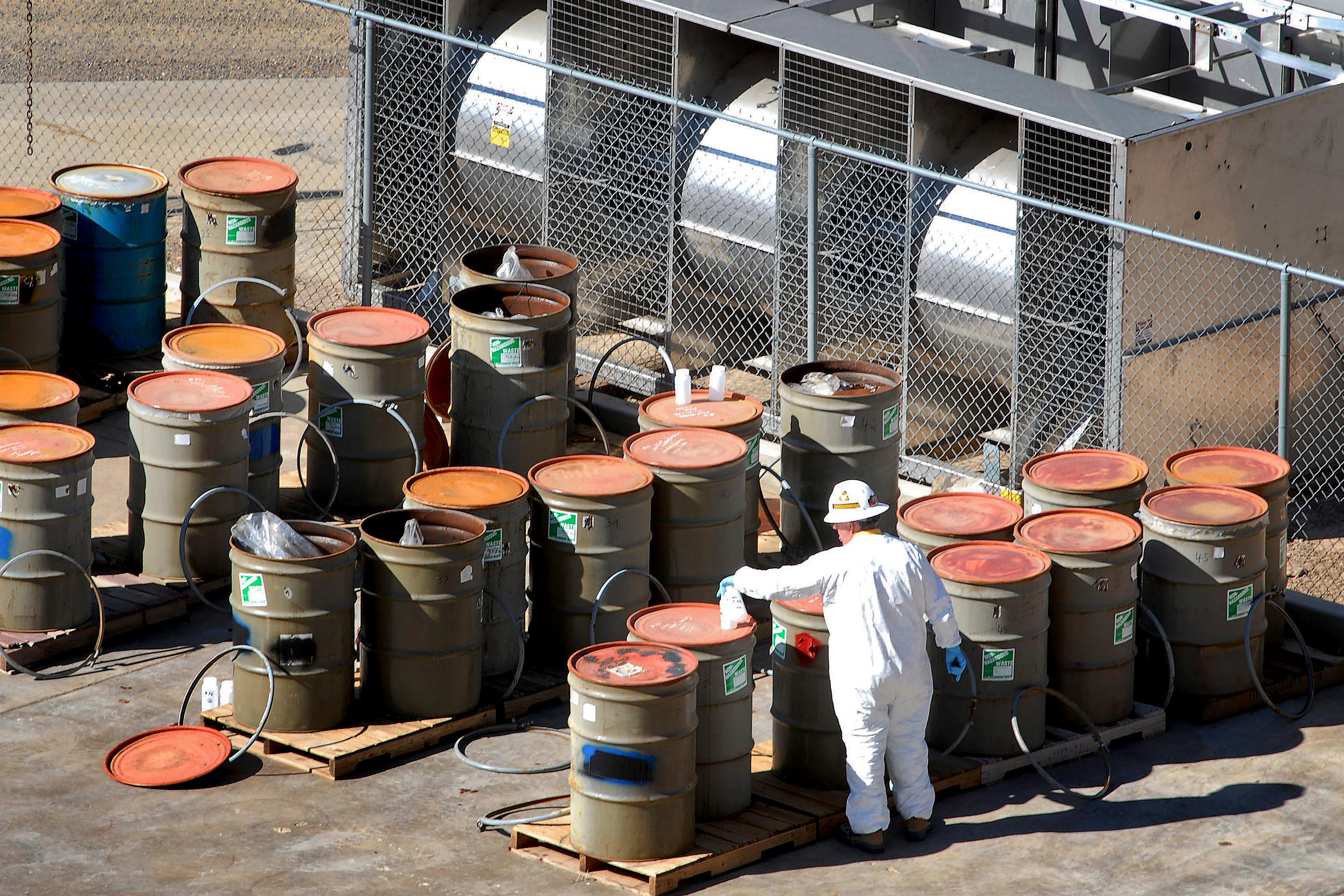 A worker looks over containers of waste at the Molycorp Mountain Pass mine in Mountain Pass, in 2009. Jacob Kepler/Bloomberg via Getty Images.

That waste, according to Fortune, is also a little less bad:

The old Molycorp used to dump its tailings in a slurry behind a dam. Now it will use a high-pressure system to squeeze out most of the water, leaving behind a "paste" that will be reburied in what's essentially a 90-acre landfill just west of the pit mine.

"This complex is one of the world's most technologically advanced, energy efficient, and environmentally progressive Rare Earth facilities," a woman drones over footage of the mine from last year.

The change in language is only natural. Whereas Mountain Pass was sucking chemicals out of the ground to power brighter TVs and more powerful metals in the '60s, '70s, '80s and '90s, today, much of the demand for its wares come from clean technologies — for example, the lithium batteries that power smart cars and solar power systems.

Two weeks ago, Siemens announced that it had chosen Molycorp to supply the rare earth elements for its wind turbines. The agreement will last for a decade, and the deal was sealed thanks to the "clean" technology Molycorp is installing at the site. "Siemens officials noted [...] the environmental and process innovations," Molycorp proudly announced in a press release.

Saving the World Through, Um, Mining?

Last week, we saw Elon Musk stand onstage and announce a new era in technological production. Not of information, but of infrastructure. In Tesla's case, that means the remarkable lithium batteries that sit inside the sports cars and, soon, garages of Tesla's customers.

Tesla doesn't use any rare earth elements to make its batteries — a rarity. But it does use related resources, like cobalt and graphite, which can have disastrous environmental effects and indeed have in China, where most natural graphite is mined. That's why Tesla and Musk are so interested in controlling the supply chain itself. Not only are they constructing a Gigafactory to build batteries, they are pledging to supply the minerals and metals needed entirely from North American sources.

"It will enable us to establish a supply chain that is local and focused on minimising environmental impact while significantly reducing battery cost," a Tesla spokesperson told Bloomberg last year.

The decision is spurring many new mines, some in Canada, to meet demand. It's strange to think that America and Canada will churn out minerals, metals, and batteries decades after most of this kind of manufacturing was exported. Silicon Valley, after all, was named because it once actually manufactured the silicon chips for early computers (leaking toxic groundwater at dozens of sites nearby).

Not every technology company is going rare earth-free, like Tesla is. But more are looking for local sources for the metals they need — whether for political reasons, moral ones, or for the good press. Now, as Mountain Pass sputters back to life, America is once again producing those metals. As great as the cleaner methods used at Mountain Pass sound, it's important to remember that it's still producing plenty of toxic waste and slurping up resources.

Clean energy often still demands dirty tech. In other words, we aren't out of the woods — er, mineshaft — yet.