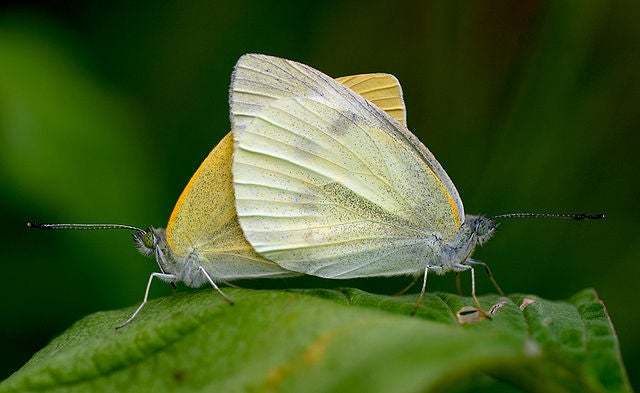 A mating system that puts the sexes in conflict can evolve some pretty extreme copulatory structures. Spiky penises and twisty vaginas are the tip of the iceberg. According to a study in the Journal of Experimental Biology last week, we should add protein-melting vaginal tracts to the list.

The cabbage white butterfly (Pieris rapae) is a ubiquitous pest in large parts of North America, Europe and Asia, where their larvae feast on plants like mustards, cabbage and broccoli. Females can live up to three weeks after they emerge from the chrysalis, alternating between mating and laying eggs. As they mate with more males, they get more sperm to choose from when they lay eggs. Their babies are more diverse, giving the females more opportunities for some of them to survive to make grand-larvae.

Male cabbage whites also mate multiple times. When a male finds a willing female, he pushes a huge package of sperm and other proteins into her reproductive tract. She'll shunt the sperm into a specialised storage organ soon afterwards, but a big wad of gelatinous spermatophore proteins remains behind, clogging up much of the space and preventing her from mating again. That increases the chances that she'll use his sperm, because she can't mate with new males while she's clogged up. But it also messes up her plan to have diverse offspring. So she gets rid of the wad.

Female butterflies have an organ called the bursa copulatrix inside their reproductive tract that breaks down male ejaculate. The bursa has grinding structures to crush the the spermatophore; the female absorbs its proteins and uses them for energy and egg production. That's another reason she benefits from mating more often. But no one knew whether the spermatophores were dissolving gradually on their own or whether females were actively digesting them.

In the study, Melissa Plakke and her colleagues at the University of Pittsburgh examined conditions inside the bursa of the female cabbage white. They found that the organ makes nine different enzymes that digest proteins. Its digestive capacity is turned on as soon as the female emerges from her chrysalis and grows over time: three days after she emerged, a virgin female had more than twice as much enzyme activity in her bursa than is found inside a caterpillar's gut, even though the bursa is 20 times smaller. When a female was allowed to mate, enzyme levels in her bursae fell quickly, but increased again as the spermatophore was absorbed.

Plakke's results suggest that females don't spend much time and energy controlling the enzyme levels in their bursa; they simply turn on the juice at emergence and let the enzymes collect until they mate. If that's true, a female could run the risk of digesting her own reproductive tract if she waited too long to have sex. The researchers think that in the real world, this has never been a problem. [Plakke et al. 2015]