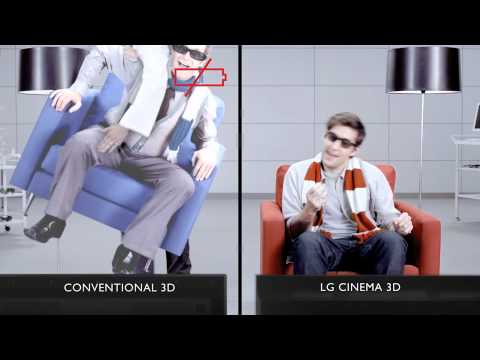 Remember when the battle for your 3D TV dollars came down to the difference between active and passive 3D technology? LG does, and it’s about to pay dearly for saying its passive 3D tech was better than Samsung’s 3D TVs back in 2011.

The court case saw Samsung sue LG over claims that the new LG 3D Cinema TVs were superior to Samsung’s active 3D TV offerings back in 2011.

LG’s advertising attack was two-pronged: LG conducted a “study” in a Westfield shopping centre where consumers were asked to watch the same stock footage on two different televisions. One TV was an LG 3D Cinema panel with passive 3D, the other was a competitor product with an active 3D panel.

The second prong was a series of ads showing the difference between active and passive 3D technology.

The ads are above.

LG’s argument was that active 3D panels require heavier, battery-operated, rechargeable glasses that work by subtly opening and closing a shutter to trick your brain into making the image 3D. Alternatively, passive technology sees the panel itself do all the heavy lifting, meaning that the glasses are much cheaper and don’t include any added gadgetry.

Sony disputed the blind-test in shopping centres, but only Samsung took a case to the Federal Court.

The case has been in and out of the Federal Court Of Australia for the last four years (seriously) and finally came to a head this week when Judge Nicholas J ruled that LG had engaged in deceptive conduct for comparing its TVs to the Samsung competition both in stores and on TV. Not that it matters now: passive 3D technology is standard on most sets these days.

In his judgment, Judge Nicholas said that LG would be restrained from implying that watching one of its TVs over that of a competitor would reduce dizziness or nausea.

You can read the full judgment here. Further hearings as to damages will be held in August.

LG Australia’s legal and compliance manager, Evelyn Soud, gave us this statement, saying that the court found largely in favour of the gadget giant:

The recent court judgment in the 4 year old Samsung vs. LG case found largely in favour of LG in that the majority of the TVCs and other claims were found not to be misleading, especially with regards to the LG Brightness, Battery and Weight TVCs. The judgment also confirmed LG’s Full HD 3D claim. The fact that the court did not accept several of the pleaded representations made by Samsung is quite telling, and Samsung has been ordered to pay 50% of LG’s legal costs.”