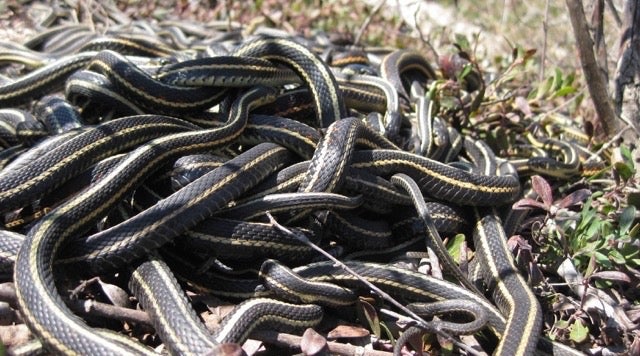 More specifically, males swarm receptive females in a sort of sexual pile-on, forming enormous mating balls that can contain as many as 100 males trying to court the one female at its centre. When a female chooses a mate from the ball, she gets more than just a dose of sperm: A large portion of the male's ejaculate hardens into a jelly-like plug inside the female's vaginal pouch, preventing her from ejecting his sperm and making it difficult for her to mate with other males. The plug increases the chance that he will become a father, but according to a new study in the Journal of Experimental Biology, it is an extremely expensive insurance policy.

Christopher Friesen and Robert Mason, herpetologists from the University of Sydney and Oregon State University, realised that they could determine exactly how much energy it took to make these plugs. Male garter snakes do not eat while they breed, so every plug they make relies on their stored fat reserves. And since the snakes make sperm in the fall and store it until they breed in the spring, the researchers reasoned that any energy they spent on their ejaculate during the breeding season went into making the plug.

But they still had to tease out the amount of energy the snakes spent on copulating from the amount they used for courtship. To do that, the researchers measured the resting metabolism of two groups of male snakes supplied with a steady stream of receptive females. In one group, the males were allowed to court and mate normally. In the other, they could court, but a piece of adhesive tape blocked the female's reproductive opening to prevent them from mating. The researchers also analysed the energy content of mating plugs from normal males and sperm-free plugs from males that were given vasectomies.

Friesen and Mason found that the plugs were surprisingly expensive. Each plug a snake built used up to 18 per cent of his daily energy budget, equivalent to the amount of energy pregnant female garter snakes burned each day. Small males used up to eight times more energy to make the plugs than large males. The expense explains why male snakes can only build one or two plugs each day, and suggests that when smaller, younger males get a rare chance to mate, they really give it their all. [Friesen at al. 2015]