Dogs Follow People Across Billboards In This Clever Adoption Campaign 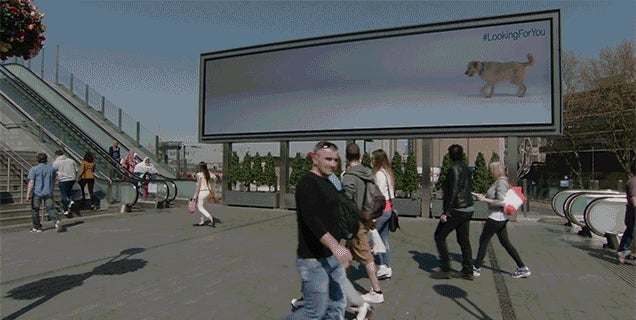 The most effective tool an animal shelter has it when it comes to getting pets adopted is the animals themselves. So the Battersea Dogs & Cat Home, a shelter in the UK, created a brilliant ad campaign that had dogs following potential owners from billboard to billboard as they walked through a shopping mall.

The interactive advertisement was able to track the location of individual people as they moved thanks to a chip-enhanced flyer they were handed by volunteers, and sensors setup throughout the mall. Depending on where they were or what direction they were walking, specific clips were played on various displays to create the illusion the dog was trying to follow them home.

The campaign, created by ad agency OgilvyOne, is reminiscent of a similar one in the UK that had kids in advertisements pointing at actual planes flying overhead. But instead of selling vacations, the goal of this campaign is a little more altruistic. And it will probably be even more effective since puppies are always cuter than kids.