Will The Next Generation Of Displays Be 3D? 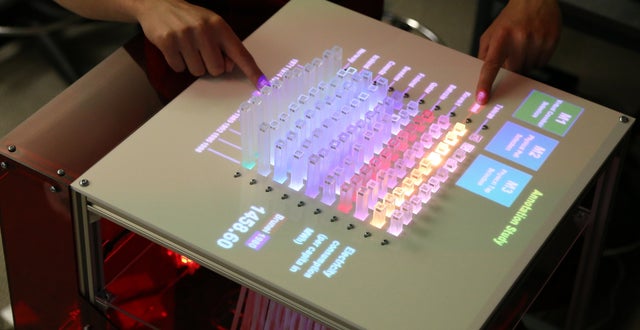 In a few short years, touchscreens have revolutionised the way we interact with technology. But to make the best use of our senses, the next generation of displays will not be flat, but have three-dimensional, reconfigurable surfaces.

At least, that’s the belief of Lancaster University’s Jason Alexander, whose lab is prototyping 3D displays to study how we interact with them. Over at The Conversation, Alexander discusses how 3D displays could change our relationship with technology:

Displays with pixels that can physically protrude from the surface will allow developers to enhance familiar applications such as architecture, design, terrain modelling and photography by rendering computer-generated 3D scenes in three dimensions in the real world. This will opens all sorts of opportunities for novel applications in team collaboration, tangible entertainment and ways to make computing more accessible to those with disabilities.

Devices will be able to change their form and function: a mobile phone that mutates into a TV remote control, and then into a video game controller, re-configuring itself to provide appropriate interfaces. Apps will not only be able to modify a visual display, but also dynamically change the physical properties of the device.

The video below shows a display Alexander’s lab has designed specifically for visualising data. The interactive bar chart allows users to perform basic data visualisation tasks, such as displaying and filtering data, organising it into rows and columns, navigating between large datasets and making annotations. All things that, admittedly, you can do quite easily in Excel, but direct tactile manipulation of data might cause our brains to study it differently, spotting trends and patterns that we wouldn’t have noticed on a 2D screen.

Sure, it looks a little like a Lite Brite at this point, but tangible interfaces are still in their infancy. If you’d like to try your hand at transforming a flat display to a 3D one, Alexander’s even invented a prototyping tool to help you get started. [The Conversation]