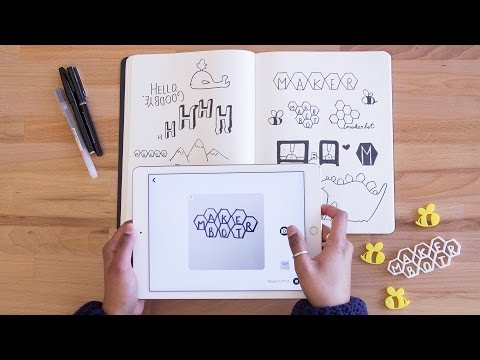 One of the biggest reasons there isn’t a 3D printer in every home — yet — has nothing to do with price or availability. It’s the fact that if you want to design and print your own objects, you need to know how to use relatively complex 3D modelling software. So MakerBot has updated its free PrintShop iPad app to include a new feature that can photograph and easily convert your hand-drawn sketches into 3D models.

What that means is that even kids can use a 3D printer to produce their own plastic creations without having to master a basic piece of 3D modelling software like Google’s SketchUp. It also means that the average person who’s interested in 3D printing doesn’t have to be limited to the 3D models created by others available via sites like Thingiverse.

Using the PrintShop app’s new Shape Maker functionality sounds incredibly easy. Once you’ve photographed a sketch or drawing with a distinct level of contrast, you’re able to adjust a simple slider that highlights what parts of the image will be converted and included on your 3D model. When that’s been finalised you can then modify the scale of your model, adjust how much it will be extruded which gives it depth, and even choose if one side or the other will be completely filled in. After that the completed model is wirelessly sent to a MakerBot printer through the Thingiverse site.

The Shape Maker feature is a major update to the MakerBot iPad app, but also an important stepping stone towards a future where every home has a 3D printer, and everyone living there is able to use it. It’s not the perfect solution yet, users wanting to print precise replacement parts will still need to turn to modelling software, but it should give people interested in 3D printing another solid reason to finally buy one and start dabbling with it. [MakerBot]