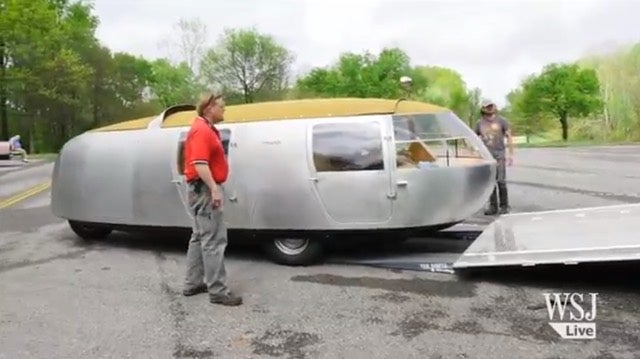 Buckminster Fuller was either a brilliant inventor or a nutcase charlatan, depending on who you ask. And perhaps no single invention of Bucky’s encapsulates that divide quite like his Dymaxion car. Was it a death trap or a feat of engineering genius? The Wall Street Journal recently tested out a functioning replica and decided it was very much the former.

The vehicle I drove last week is a museum-quality copy of Dymaxion #1, one of three vehicles designed by Fuller and built by the 4D Company in Bridgeport, Conn., in the early 1930s. Jeff Lane, founder of the Lane Motor Museum in Nashville and an aficionado of midcentury modern automobiles, commissioned the vehicle to fill out his menagerie of streamlined curiosities. The remaining original Dymaxion, #2, is in the National Auto Museum in Reno and is undrivable.

“I liked the early car,” said Mr. Lane. “It was the closest to Bucky’s original concept.”

Dymaxion # 1 is something of a fatalistic choice. It crashed at the 1933 Chicago World’s Fair, killing the test driver and injuring two passengers in an accident that was splashed across front pages, scaring off investors. Later it was sold to Gulf Oil and was burned to the axles in a refuelling incident.

You can see video of their test drive below.