There Are At Least 11 Runaway Galaxies Screaming Across The Universe 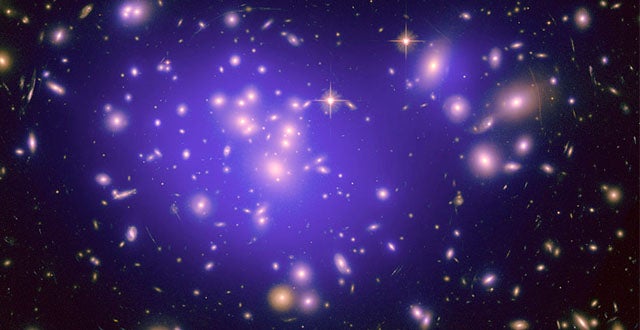 Every now and then, astronomers spy a runaway star, one that's hurling itself across its galaxy at breakneck speeds. But stars aren't the only things that occasionally go beserker in the cosmic void: Galaxies themselves will sometimes depart home, never to return.

In fact, astronomers at the Harvard-Smithsonian Center for Astrophysics have now spotted 11 renegade galaxies, screaming across intergalactic space at up to 6 million miles per hour. Each of these star blobs has surpassed escape velocity, meaning that it's broken the gravitational bonds holding it in its cosmic neighbourhood. The discovery of these lonely exiles appears this week in the journal Science.

A schematic illustrating the creation of a runaway galaxy. In the first panel on the left, an intruder galaxy approaches a galactic cluster, where a compact elliptical is already in orbit. When the compact elliptical encounters the intruder, it receives a gravitational "kick" and goes flying off into space. Image credit: NASA, ESA, and the Hubble Heritage Team

Researchers discovered the galactic nomads while mining archives of astronomical data in search of compact ellipticals, a relatively new class of tiny galaxies that are thought to form when a group stars rip away from a much larger galaxy. Because of their formation, elliptical galaxies are typically found bunched together, or in close proximity to a bigger neighbour.

The search identified nearly 200 previously unknown compact ellipticals. But to the researchers' surprise, 11 of these were completely isolated in intergalactic space. What's more, isolated ellipticals were moving much faster than their cluster-bound brethren. The researchers developed a theory regarding the origin of galactic loners, which is explained in a press release:

A hypervelocity star can be created if a binary star system wanders close to the black hole at the center of our galaxy. One star gets captured while the other is thrown away at tremendous speed.

The more we learn about the cosmic turf wars playing themselves out all around us, the more grateful I am that our little solar system hasn't been caught in the crossfire yet. Kinda puts your problems in perspective.

Read the full scientific paper over at Science.