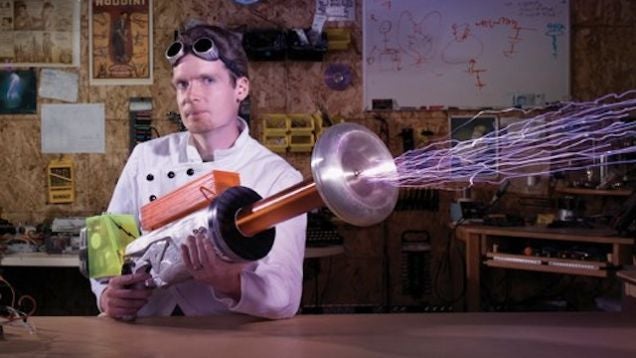 The Army’s M4 assault rifle usually has a singular, deadly purpose: sending 5.56mm chunks of copper at things you don’t like very much. But according to Defense One, the US Army is working on an attachment for the M4 that would pretty much turn it into a ray gun.

The device, nicknamed ‘Burke’s Pulsar’ after its inventor, an electronics engineer with the Army’s Armament Research, Development and Engineering Center, fits over the barrel of a standard-issue M4 (or probably any other 5.56mm weapon), kind of like a ray gun bayonet. When the rifle fires a blank round — same gunpowder explosion, but without a bullet — the explosive energy is converted into electrical energy, via the piezoelectric effect.

That electrical energy is then sent out via two ant-like antenna which spread from the barrel of the weapon. The range and power is ‘still classified’ — this is the military, after all — but the hope is to be able to disable and destroy circuit boards from range. That would be used all over the battlefield — stopping trucks without shooting them, disabling IEDs from afar, or just nuking someone’s mobile phone.

Ray guns of some kind have existed before, but they normally require big old battery packs (or just an entire Humvee) to work. ‘Burke’s Pulsar’ could provide soldiers the ability to shoot down a hostile quadrotor without unpacking a single AAA.

Picture: The Tesla Coil Nerf Gun, which the US Army is sadly not testing