Inside The Fiery Workshop Of A 21st Century Swordmaker 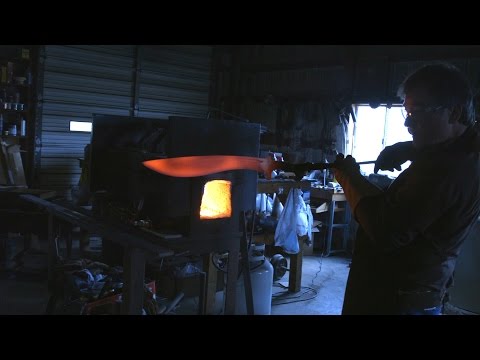 Down a stretch of country road in upstate New York there is a shed. The shed itself is nothing spectacular, a whitewash number with years of weathering. But inside sparks fly, fires breathe, and slabs of steel are fashioned into capable killing machines. This is Odinblades, a grimy shrine to the ancient art of swordmaking.

And it’s also where John Lundemo, a 58-year-old blacksmith, spends his days.

Ask any sword seller in the NYC area about Lundemo and they will most likely know, and sell, his work. Sword forums, filled with buyers, sellers, and makers, sing his praises. People who’ve wielded his blades say they look and feel natural, like they were grown out of the ground. He’s one of the best swordmakers in the northeast, and a contender for the most talented in the entire country. But every work of steel starts right here at Odinblades, an homage to his own Norwegian heritage.

“I was throwing out some encyclopedias that had gotten all moldy, and I was thumbing through them and this picture of Odin came up — the helmet, the wings, the ravens on his shoulder,” Lundemo says. “He was just the coolest…and that’s how I got it.”

The dungeon-esque workspace is like an eccentric house of horrors with whirring grinding wheels and fire-breathing forges next to a Ricky Martin poster, a Ludwig drumkit, guitars, amps, and various Christian iconography. It’s far removed, what some would call “the middle of nowhere,” but that’s how Lundemo likes it. Things tend to get noisy.

“I saw this place, and I knew it was perfect,” Lundemo says. “I can crank up the noise in here. I can run machinery all night if I want. I can sand all night in here…I don’t have any neighbours. It’s perfect.”

Viking longswords, horsechoppers, samurai-style blades. Whatever custom sword you want, Lundemo will make — with a few exceptions. No fictional or historical replicas, so leave your Game of Thrones Ice blueprint at home. All of his swords are his own creations pulled from historical reference and customer specifications. Hilts may be a little longer, or blades a little bigger, but they’re all fully functioning cutting machines.

Every blade begins from a slab of metal. Lundemo cuts out the general shape and grinds it to perfection.

Then the fun begins.

He begins with a process called “normalizing,” where he heats the blade in the forge. This straightens the steel grain so the sword has a uniform hardness. Once the steel is a nice burnt orange, Lundemo perilously drops it into a vat of peanut oil cooking near 400 or 5oo degrees, releasing a burst of flames. This is called a “heat treat” or “quench.” After a few moments, he pulls the sword out of the vat, now a dark charcoal black and smoking. Then Lundemo has about 90 seconds to align the blade just right with a straightening tool. He sets the blade aside and lets it cool.

He repeats this process, called “tempering,” a couple more times, lowering the temperature each time. After that the sword is sanded, and sometimes depending on the make, dipped into a vat of acid to create a “blade pattern,” or hamon, on the sword itself. At last, the blade is attached to the hilt or grip — and there you go. You’ve got a sword.

Unfortunately, the sword-buying market isn’t what it used to be. Lundemo is so quick to sell every blade he makes, he doesn’t even own a sword himself. He represents an old guard of blacksmiths, many of whom have retired or passed away. Some blacksmiths who work for competing workshops have even apprenticed under Lundemo. But the real threat to making a living off custom-made swordmaking is foreign markets creating dressed-up inferior weapons at a low-cost. And for a customer that’s usually searching online and for the best price — it’s hard to sell quality through pixels on a screen.

As a swordmaker who’s spent more than 30 years perfecting his craft, Lundemo never had a teacher. Trial-and-error was his textbook. He started as a jewellery maker in New Mexico and soon became fascinated with swords after watching the Hammer film Captain Kronos: Vampire Hunter. After taking up sword fighting himself, he thought he could make better weapons.

“We used to use steel blunts for our swordfighting, and naturally you’d bang them together they’re not going to last forever,” Lundemo says. “I didn’t know about balance, and I didn’t know about heat treating. I was making swords for so many years before even knowing any of that stuff. I was basically swinging around big metal crowbars. It took a long time to learn that stuff. That didn’t happen overnight.”

What didn’t happen overnight, actually took many years. Today, Odinblades, and his own semi-custom shop Longship Armoury, makes swords that sell around the world, from one to several thousand dollars each. Although the US used to be the biggest market, many Odinblades find their way on the other side of the Pacific, mostly in China where buyers are rediscovering their cultural heritage.

“It’s been hard for me,” Lundemo says. A fire a couple years back nearly destroyed his workshop and everything in it, putting him out of work for almost half a year. Sword buying and renaissance festivals aren’t as lucrative as they use to be. But watching him dance among his medieval machinery, boisterously toiling away on one of his many lethal works of art, his enthusiasm is infectious. He doesn’t explain his love for swordmaking in flowery language about preserving history or some forgotten art, it’s simply “what he knows.”

Before leaving Lundemo’s rusted palace of cold steel and the old ways of war, the blacksmith shows off his wares. A five-foot-long horse chopper is destined for a buyer overseas and half a dozen other swords eagerly await future owners. Lundemo grab a long sword with ornate designs near the hilt, etched in dark steel, with brown leather wrappings. It’s the first blade Lundemo made near 3 decades ago, a Conan the Barbarian look alike. He laughs at its crudity, pointing out the number of rivets in the handle, and puts the sword back in the case among the rest.

He’s come a long way. He’s got the scars and the skill to prove it.