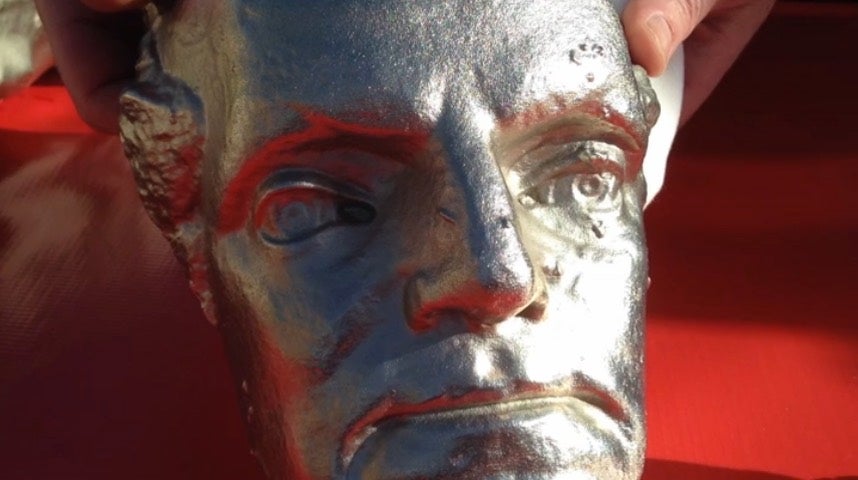 Time capsulers are always on the hunt for items that perfectly represent the 2010s. Lately they have been burying iPhones, Tasers, and even Dogecoins. So what seems to be the hot new trend for 2015? 3D-printed objects.

This past February crews working on the restoration of Baltimore’s Washington Monument were surprised to discover a time capsule filled with coins, newspapers, and a George Washington speech. But when people of the future open the new capsule from 2015 that’s replacing it, they won’t find conventional artefacts like money and papers. Instead, they will discover 3D-printed versions of George Washington’s face, torso, and hand.

It’s all thanks to Michael Raphael, president of Direct Dimensions, a company that specialises in laser scanning and modelling. Even before the 200-year-old time capsule was discovered, Raphael asked if he could take a 3D scan of the Washington statue before it underwent a $US5.5 million restoration by the Mount Vernon Place Conservancy. Those scans were then converted into the 3D-printed objects which are being interred this week.

“When they unearthed the cornerstone and realised they were going to put it back and needed something to put in it, we volunteered the idea of putting in 3-D printed versions of George,” Raphael told the Baltimore Sun.

Raphael’s company did the 3D scan, but there were a number of other companies involved, including NextLine Manufacturing, which did the 3D print in nylon, and RePliForm, which cast the items in copper and nickel. Despite the hefty $US10,000 price tag for the metal-cast prints, the Washington items are all being donated at no cost to the Conservatory.

Tip for time capsule hunters of the future: Be sure to look inside the 3D-printed hand. It was made hollow, ostensibly to hide a letter explaining the removal of the time capsule’s older items and how they were replaced with 3D-printed items. But who’s to say there’s not a treasure map inside?*

*There’s almost certainly not a treasure map inside.