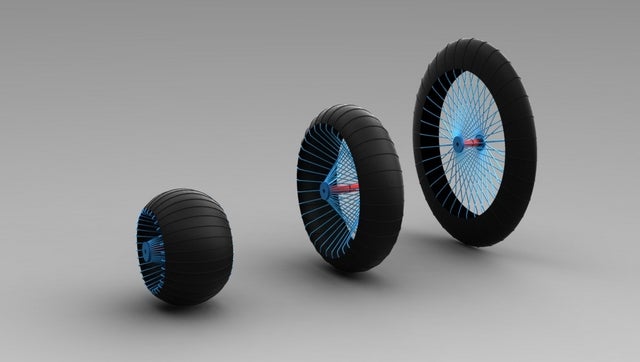 The normal tyre has been adapted over the course of a century to be pretty damn good at carrying people places. But they still break from time to time.

Ackeem Ngwenya is a Royal College of Arts graduate who has been working on his expanding wheel concept for a few years now. I met him two years ago, when his design prototype was built out of paper, sticks and a few 3D-printed components.

The current evolution stays fairly true to the original design principles: using a scissor-jack mechanism, the wheel can become smaller and fatter to increase grip, or larger and thinner for better paved surfaces. Internal structure comes from a series of spokes, which attach to a central hub, and are then tensioned by pushing the spokes in or out, allowing the wheel to contract or expand.

The idea is to produce a robust wheel that’s puncture-resistant, and able to adapt to all sorts of terrain — Ngwenya’s hope is to make the lives of rural farmers in developing countries easier. His project isn’t the first to take the air out of tyres — that honour goes to Michelin — but the expandability trick (if it works) could prove unique. [Dezeen]