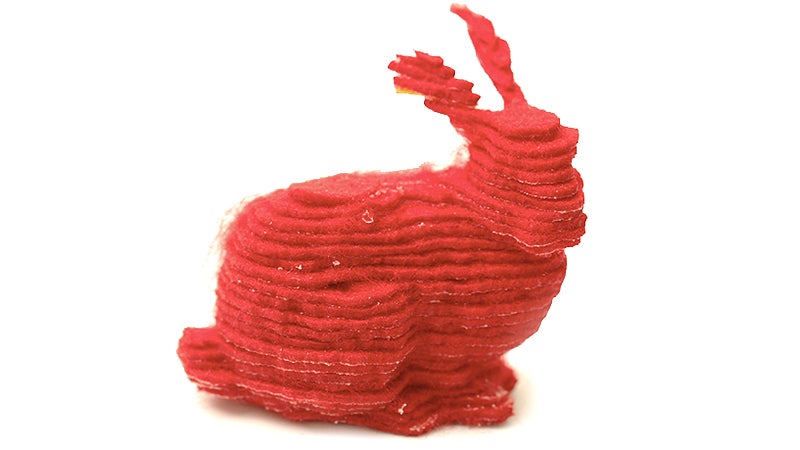 Your typical 3D printer works by layering melted plastic to eventually build up a solid 3D object, but what happens when you swap plastic for fabrics? Suddenly you’ve got a machine that can create objects that are soft, deformable and cuddly.

The printer uses rolls of regular old fabric backed with a heat-activated adhesive. It works like a more traditional 3D printer in that an object is built up layer by layer, but instead of a plastic extruder, layers of that thin fabric are stacked, trimmed by a laser cutter, and then adhered to the layer below using a heated head that activates the glue in specific areas.

When the object is completed it looks just like a fabric cube, but the excess fabric can then be peeled away revealing an intricate 3D object inside. How soft or deformable the object is can also be customised by creating strategic cuts within the model as it’s being produced.

And while it might seem like the technology’s only useful application is revolutionising Build-A-Bear Workshop stores, these 3D fabric models can be further enhanced using conductive fabrics and other electronics. The Disney researchers were able to create a soft starfish toy that doubled as a touch sensor for a computer, and even a plush smartphone case that harnessed the power from its wireless NFC functionality to make a small LED blink. Up next, comfy 3D-printed clothing? [Disney Research]