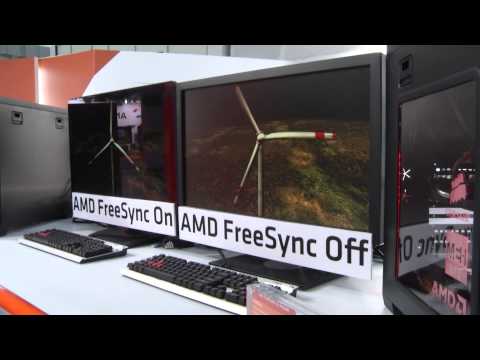 If you’re a gamer, stuttering and weird frame rate issues are an unfortunate part of everyday life. Technologies like V-Sync go a long way towards fixing the problem, but don’t completely solve what is a hardware issue that exists within the way that monitors refresh and display video frames. But gnash your teeth in anguish no more — AMD’s FreeSync makes everything nice and smooth.

When a monitor is displaying a video signal received from a PC, tearing occurs when that monitor’s (default, fixed, let’s say 60Hz) display refresh rate is different to the rate at which frames are being created by the (entirely variable, depending on graphical load, anywhere between zero and hundreds of Hertz) PC. It manifests as flickering, where one older graphical frame is superimposed halfway or partially upon the new one and you’ll see an annoying horizontal line for a fraction of a second — it’s only around for a fraction of a second, but if it’s happening on every frame, you’ll see it.

FreeSync fixes that. It just fixes it. It doesn’t happen any more. At all. FreeSync is AMD’s name for a technology called adaptive refresh, and it’s a software/firmware tweak to the scaler inside any of a bunch of new monitors that automatically matches their refresh rate over a wide range (from over 40 to 144Hz, in some cases) to the frame rate output.

FreeSync requires that you buy a new monitor, one that is FreeSync compatible. LG has a few, including the excellent 34UM67, a 34-inch, 21:9 UltraWide monitor with support for FreeSync straight out of the box on its 2560x1080pixel 60Hz panel — this is the screen that I tested the technology on. (In fact, that FreeSync support is the main difference from the otherwise very similar 34UM65.) Samsung has a few, as does Acer and BenQ and Viewsonic and a bunch of other display manufacturers — this is a trend that’s picking up steam.

To use FreeSync, you also have to have an AMD Radeon graphics card compatible with FreeSync. AMD’s FreeSync FAQ tells you that you’ll have to have one of a certain range of cards to use FreeSync’s video frame rate adjustment tech, but a more specific range again to use FreeSync for in-game dynamic refresh (emphasis mine):

When it’s enabled, and when you’re in that sweet spot of frame rates, FreeSync is great. With FreeSync enabled, you’ll see the incidence of screen tearing almost entirely removed, instead replaced with a usually-smooth and consistent series of entire frames. AMD’s demos show it off at its best, obviously, but the difference between a flickery tearing mess and one with FreeSync switched on is stark; it’s like going from a stop-motion flick to smooth, crisp CGI.

The AMD demo I liked most for demonstrating the value of V-Sync was a rendering of a windmill, viewed from above and in front with the blades rotating. With FreeSync off and V-Sync off, juddering of the rotation was easily visible. Even with V-Sync, which tries to lock PC output frame rates to the monitor’s standard refresh rate, overall stuttering is visible — but it’s just visible in between frames rather than during them. When you’re in that supported range of frame rates, FreeSync just sorts it out.

Screen tearing isn’t the worst thing in the world when it happens, but it’s one of those minor annoyances that can distract you somewhat and that does take away from the gaming experience. FreeSync, for all intents and purposes, removes that annoyance, and that’s a good thing. And it’s free, with that caveat of needing a new monitor; AMD’s gift to the world. You can’t argue with that. What FreeSync does is give you smooth gameplay from 40FPS upwards, rather than the 60FPS-plus that we’ve been used to in the past.

FreeSync is out of its element when you have an unreasonably powerful gaming PC and you’re using it to play anything but the newest and most graphically demanding games, or when you’re just playing any game old enough that it won’t tax your system enough to drop below that usual V-Sync cap of 60Hz. If you’re going to be playing modern games, and you don’t have the most powerful rig around, only then FreeSync starts to pay itself off.

I have read reports around the ‘net of ghosting happening on some FreeSync displays with the technology enabled. That’s not a good thing. But it’s also worth mentioning that it’s not necessarily FreeSync’s fault, and is far more likely to be a case of the monitor itself having imperfectly applied settings like refresh rate overdrive running in concert with FreeSync. Straight out of the box, on an untweaked and unmodified and otherwise naked panel, FreeSync enabled makes sub-60FPS gaming look pretty.

AMD got in touch with us to make it clear, though, that any ghosting is up to the monitor’s pixel drive hardware, and not FreeSync. “The perception of ghosting on an LCD monitor is derived from two factors: the response time of the pixels used in the physical LCD and the pixel drive elements of the display firmware,” says Robert Hallock, Head of Global Technical Marketing at AMD, “AMD FreeSync does not, and cannot, have any influence on these characteristics of a display. FreeSync uses protocols of the DisplayPort standard to communicate with the graphics card to help the monitor match its refresh rate with the number of frames delivered by the graphics card per second. As with any other monitor, it is the responsibility of the manufacturer to determine pixel response and develop superior firmware in order to reduce or eliminate ghosting.”

If you have an AMD graphics card, FreeSync is yours for free. If you already have a supported card, then you already have the technology. All you need is a new monitor, and if you’re picking up a new one anyway then there’s no incentive not to get FreeSync apart from any difference in price between a screen that has it and a screen that does not — but that price gap would exist anyway because of different resolutions, screen technologies and other extra features.

FreeSync is technically brilliant. It’s such a simple idea — dynamically match the monitor’s refresh rate to the frame rate being output by the graphics card. But it works, and the difference that it makes is huge. Even if you weren’t really bothered by screen flickering and tearing in the first place, not seeing it is just so liberating. It’s like waking up from being sleepy — everything just takes on an extra level of clarity and brilliance.

Unfortunately, Nvidia has zero plans to support FreeSync. That, in my opinion, is really disappointing. I think FreeSync is just as good as the G-SYNC I’ve seen in action, it doesn’t require as much of an extra financial investment, it’s open-source and doesn’t require any licencing fees, and it’s easier for gamers to understand and get into. It’s creating a VHS versus Beta situation, and that’s not a good thing for the future of technology.

If you do have a supported AMD graphics card, though, and it’s powerful enough that you’ll be gaming on it, and you’re looking for a new monitor, then buying a FreeSync one is almost a no-brainer. It’s a very versatile piece of technology, it genuinely and significantly and noticeably improves the overall experience of gaming.