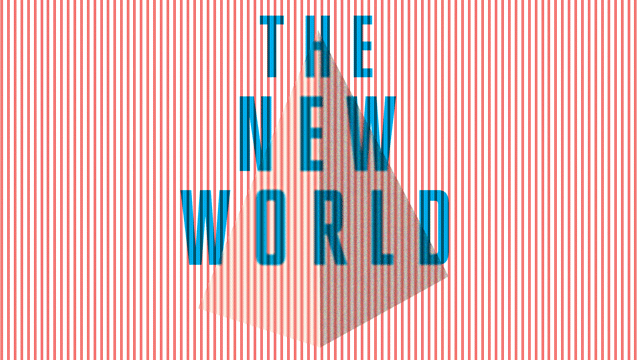 You have not read a truly digital book until you've read The New World. The novella is about a woman trying to reclaim her dead husband's head from a cult-like cryogenics company. But more than that, it is the most ambitious attempt I've seen at exploring a future where books lack physical form and are better for it.

The New World is by Chris Adrian and Eli Horowitz, and was released by Atavist Books to surprisingly little fanfare last August. Surprisingly little, I say, because Adrian is the author of the much-lauded The Children's Hospital and a member of the rarified The New Yorker's 20 under 40. (He's also a paediatric oncologist, if you really want to feel like a slacker.) I only got my copy because the price had been cut in half. And then, in October, Atavist Books, the books arm of the digital publishing company Atavist, shut down.

That's all to say that there is no real reason to write about The New World now — it got little attention, and its publishing house is now dead. Except I read it months ago and it's been niggling in my brain until I can't ignore it any longer. There are lots of ebooks, even many with gimmicks, but none where they have felt as necessary as in The New World.

I did not love The New World as a collection of words that tell a story. Nor did I loathe it. But The New World is also a piece of code, and that delighted and confused me in ways I never expected. As I scrolled, then swiped backwards and forwards, through its digital chapters, I felt like I was sneaking a glimpse at what a book unencumbered by physical pages could be.

So here is where I say spoiler alert. Not plot spoilers but, well, UX spoilers. That probably sounds odd, but that's simply because our UX experience with physical books is limited to turning pages, going from one cover to the other. Not so with The New World.

Before we even judge books by their covers, we judge them by their size. Infinite Jest is an intimidating tome; Heart of Darkness a deceptively slim volume. Reading apps often struggle to give readers a sense a book's length. Do you use page count (which don't make sense for screens), reading time (which don't correspond with how we usually evaluate books) or that bizarre thing Kindle calls "locations?"

The New World, which lives inside the Atavist app, dispenses with it altogether. A digital book has no fixed size. A digital book can have new chapters that materialise at the "end." I was once disoriented and delighted when I swiped past the final chapter of Cycle One, my screen turned a blank white, and then "Cycle Two" appeared as if out of nowhere.

There are plenty of other intriguing touches. The direction of swipes, whether left or right, orient you as the novella moves backwards and forwards in time. Coloured borders indicate the character who's narrating a section, and the colours bleed into each other as their perspectives do as well. Before the colours started blending with one another, I thought they were annoying and extraneous because the UX experience was not always good. The app itself was often slow and buggy, and I wasn't always sure if there odd things I encountered were features or bugs.

But The New World is never a Snow Fall, which is to say a story where multimedia is tacked on, distracting from rather than enhancing the text. Think back to your most immersive reading experiences and you'll probably think of a book full of plain text. Sound, video, and gifs, for the most part, pull readers out of the text, preventing them from getting lost in the words. But with The New World, Adrian and Horowitz have achieved a true melding of form and content, where the digital touches are not simply, in Adrian's own fantastic words, "gimcracks and wang-doodles."

What ever happened to the promise of ebooks?

Eli Horowitz, the other half of the team behind The New World, was also one-third of the team behind The Silent History, which generated considerable buzz as a proto-novel of the future in 2013. The Silent History exists first and foremost as a standalone app. It consists of a series of field reports from an epidemic of speechlessness that affects children in the future, augmented by reader-generated field reports that could be unlocked by physically visiting specific geographic locations.

Back in 2013, the digital publishing world still had more promising pitches than dead startups. The Silent History was refreshingly new, even if its digital bells and whistles weren't particularly essential to its core story. But I also confess my bias: I read The Silent History, which I found extraordinary, as a physical book after it was published by the very traditional publisher Farrar, Strauss and Giroux last year. I then went back to the app, which simply felt clunky and hard to navigate compared to a paper book. The geotagged reader-generated reports sounded like a fun experiment, but they seemed peripheral to the main narrative.

The New World is a more sophisticated, though still imperfect, evolutionary descendent on the path from physical to digital books. It is also being published by Farrar, Strauss and Giroux in hardcover this May. The print edition certainly won't be nonsensical, but it will be missing almost all of the elements that made it so memorable — at least for me.

When Atavist Books folded last year, the company put out a statement that admitted the market was not ready for formally innovative digital books. They wrote:

While we are very proud of the quality of the titles produced by Atavist Books to date, we have identified that the market for highly innovative enhanced full length literary e-books still heavily relies on a print component and has yet to emerge.

As a reader and a general tech optimist, I'm dismayed to see that first wave of interest in experimenting with digital literature die. The digital book publishers that have survived — Amazon, of course, but also subscription ebook companies like Oyster and Scribd (full disclosure: my boyfriend works at Scribd) — are more interested in changing the economics of book distribution than influencing the art. They are concerned little, if at all, with literary experimentation.

There will be a second wave. I hope.

I haven't talked much about the plot of The New World because that overused McLuhan quote, "The medium is message", really applies. But there is also a metaphor, if I may overreach a bit, to be made with the plot. In the novella, the now-dead husband John arranged to have his brain preserved, so that he could live on after his body fails. His wife is utterly and understandably distraught. Has her husband died or has he transcended his physical form?

We might ask the same question about books. Are they dying or just transcending their physical forms?