Apple Delays The Mega iPad, And Everything Else You Missed Yesterday 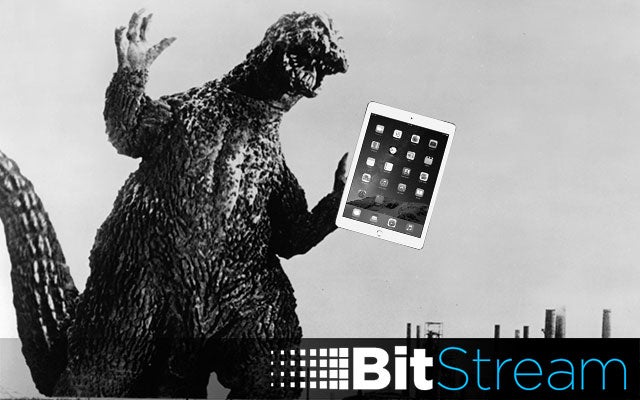 Giant iPads! Engine destroying lasers! Cars controlled by your smartwatch! It isn't science fiction, it's reality! This is the news you may have missed in the last 24 hours (or so).

The 12.9-inch giant iPad. The rumour of legend. Just became a little more real with reports from the Wall Street Journal and Bloomberg saying that they're definitely coming, just maybe a little later than expected. According to WSJ, Apple suppliers have been told to fire up they're mega iPad forges in the second half of this year, meaning a big iPad could be a talking point for Apple's annual fall press conference. Another interesting piece of info is Apple is possibly considering USB support with its larger iPad, meaning this thing is becoming more and more like a Surface with each passing rumour. [WSJ]

Mars Curiosity, one of the most important and sophisticated gadgets in human history, short circuited late last month and is currently getting a little R&R as NASA tries to figure out what the hell went wrong. [Space.com]

Lockheed Martin has a fibre-optic laser that can burn through an engine's manifold over a mile (1.6km) away. Now all we need is to build a fully armed and operational battle station. [Engadget]

The new Samsung Galaxy S6 doesn't have a removable battery this time around (bummer). So it looks like a Mophie Juice Pack might be in order. [Android Community]

Hyundai showed off an Android Wear app that can control your car. Now it's in the app store. The future, people. It's here. [Hyundai]

Say Goodbye to Softcard. The service is shutting down March 31 to be replaced by Google Wallet... er... Android Pay. What is it called right now? [Softcard]

Great news for Xbox One fans. Microsoft's console will soon have cross-play support, meaning one game works for both your PC and Xbox One. Cooooool! [GameSpot]

A New MacBook Air, finally with Retina Display, may be on its way. Hopefully, we'll have "one more thing" to talk about at Apple's upcoming Spring Forward event, but WWDC in June seems like a more likely launch date. [Wall Street Journal]

HTC may be launching an M8s, essentially the same phone as last year's M8 but with a slightly de-powered processor. [Tweakers]

The First Oculus Comes Out This Year — But It's a Phone, Not the Rift 9 Facts About Computer Security That Experts Wish You Knew HTC Vive: Virtual Reality That's So Damn Real I Can't Even Handle It What We Talk About When We Talk About LOL A Satellite Exploded in Orbit and No One's Quite Sure Why Yet