Welcome To The Robot-Staffed Resort Of The Future 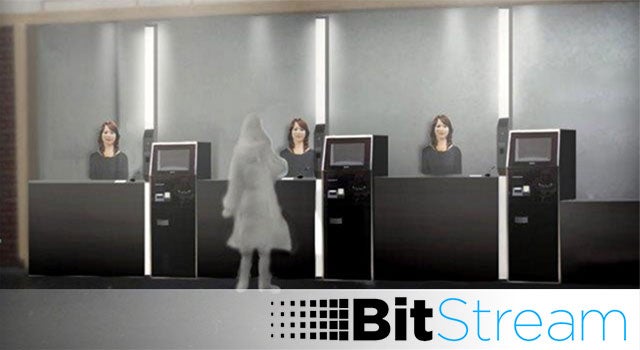 BitStream is like a Vulcan mind meld of tech news and rumours you may have missed over the weekend. Give it a read — it is only logical.

Enjoy your stay in the Uncanny Valley

Welcome to the Henn-na Hotel in the Nagasaki prefecture of Japan.

Aside from its overly luxiourious exterior, this resort is no different then any other high dollar establishment. Except when the Henn-na Hotel opens in July of 2015, it will be staffed with robots.

10 humanoid robots to be exact, capable of checking in quests, carrying luggage, and even cleaning rooms. Kokoro, a Japanese robotics company, will be supplying the robots, which they actually call "actroids". They look something like this:

These robots mimics human functions like blinking and breathing and also respond to body language and tone. The Japan Times says the robots won't completely run the hotel — there will be some human staff — but the company's president says he wants them to soon perform 90 per cent of the hotel work.

Oh, and for what it's worth, "Henn" in Japanese means both "change" and "strange". [The Japan Times via The Washington Post]

The death of an audio legend

Inventor Joe Grado passed away late last week. In 1953, Grado founded Grado Labs, a company that would go on to make some of the best hand-crafted headphones in the world. But Grado has a more profound impact on audio than just one company. Stereophile sums up Grado's enormous impact pretty succinctly:

Joe Grado was a mechanic, an engineer, an inventor (with scores of patents), an inveterate tinkerer, an artist, an operatic tenor, and an old-school American entrepreneur. Joe Grado and Saul Marantz can legitimately be called the Ben Franklin and George Washington of high-end American audio. Famously, Mr. Franklin invented bifocal glasses and demonstrated the true nature of electricity. Also famously, Joe Grado invented the stereophonic moving-coil cartridge and put countless people in touch with the real pleasures of listening to music with high-quality headphones.

It's always a sad day when the world loses a great thinker, and Joe Grado was among the best. [Stereophile]

The wearable future is becoming a giant headache for educators. If smartphones weren't a big enough asset for classroom cheaters, the smartwatch has brought teachers' worry to a whole new level.

According to Buzzfeed's Jim Waterson, many UK universities are banning smartwatches in classrooms and examination halls. The move is a anticipatory one as all universities brace for the release of the Apple Watch in April, a day that the UK educational system has already said it's nervous about.

Apps that solve maths problems. Smartwatches that can store notes. When I was in school, I had to tuck away answers on my TI-84. Times are changing.

BattleBots is Back After ten years, and It's Bound To Be Incredible A Beginner's Guide to Mezcal, Tequila's Divine Cousin The Insane Hanging Bridges That Time Forgot How the Silk Road Trail Could Lead to a Dangerous Legal Precedent The Anti-Vaccine Movement Should Be Ridiculed, Because Shame Works Can a Cheap Windows Tablet Replace Your Desktop?