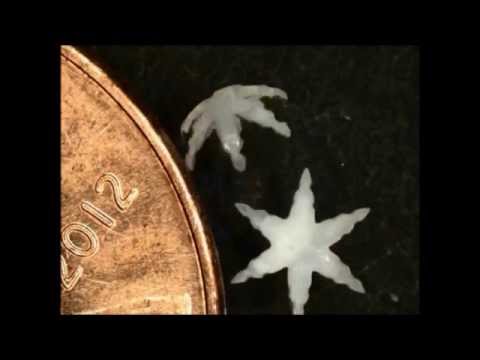 As robots get small enough to easily swim around inside the human body, they will soon be used to perform medical procedures all from within a patient. And researchers at Johns Hopkins University are making such an idea even more plausible with the development of tiny robotic grippers that will actually dissolve away inside a patient after a medical procedure is complete.

The robots look more like incredibly tiny starfish, with a few extra limbs, and once inside a patient they can be remotely repositioned and controlled to grab onto a specific object, or release a payload of medication to a particular spot in the body. One of the issues of this approach, though, has been finding a way to get the tiny bots back out, since the human body is never kind to foreign invaders sticking around.

To reduce the size and make the robotic grippers as simple as possible, the researchers made them from a material known as hydrogels which can swell and shrink without the need for an onboard power source like a battery. Instead, they react to changes in light, temperature, or acidity, which causes them to open and close.

And in order to make the tiny grippers strong and rigid enough to actually perform a medical procedure, the hydrogel material was reinforced with a stiff biodegradable polymer allowing them to grip and hold onto an object as small as an individual cell. On top of all that, magnetic nanoparticles are added to the mix which allow the grippers to be moved and positioned using an external magnetic probe.

Once a procedure was completed, the microscopic robots would just be abandoned inside a patient. And unlike a piece of gauze or some forgotten metal forceps, the human body would easily be able to break them down after a short amount of time, so there wouldn’t need to be any follow-up procedures. The bots would simply be disposed along with the rest of the waste a body produces on a daily basis. [American Chemical Society via Gizmag]