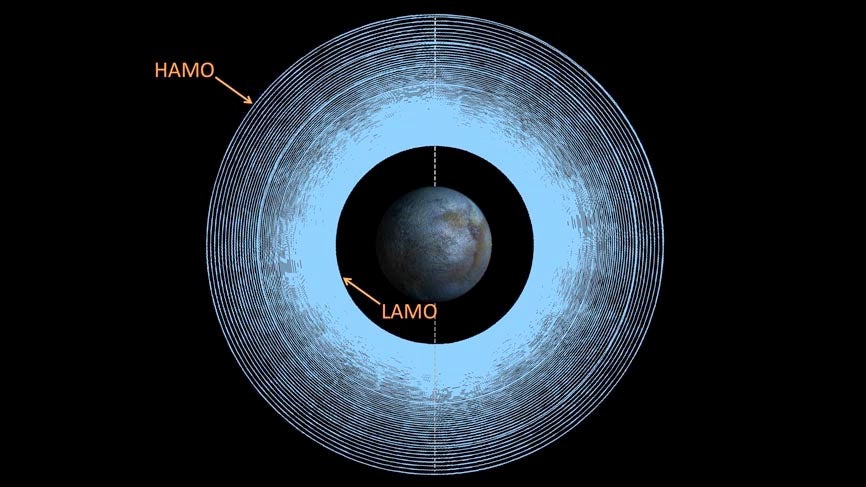 Over the next few months, NASA's Dawn spacecraft will be slowly spiralling down toward Ceres, a dwarf planet out in the asteroid belt. Ceres' gravity and Dawn's ion drive will work together to pull the spacecraft into a tighter and tighter orbit, which is rather mesmerising traced out in full like this.

Dawn is already close enough to return its first wobbly images of Ceres spinning on its axis. The spacecraft is due to arrive and enter its orbit in March 2015. NASA's Dawn Blog explains the different phases of orbit (HAMO and LAMO) that are labelled in the descent above:

The first coils around Ceres will be long and slow. After completing its investigations in RC3, the probe will spiral down to "survey orbit," about 2,700 miles (4,400 kilometers) above the surface. During that month-long descent, it will make only about five revolutions. After three weeks surveying Ceres from that new vantage point, Dawn will follow a tighter spiral down to the (misleadingly named) high altitude mapping orbit (HAMO) at 910 miles (1,470 kilometers). In the six-week trip to HAMO, the craft will wind around almost 30 times. It will devote two months to performing extensive observations in HAMO. And finally as 2015 draws to a close, it will fly an even more tightly wound course to reach its low altitude mapping orbit (LAMO) at 230 miles (375 kilometers), where it will collect data until the end of the mission. The ship will loop around 160 times during the two months to go from HAMO to LAMO.

The spacecraft will be taking a lot more pictures as it gets closer to Ceres with its three main instruments: a visible camera, a visible and infrared mapping spectrometer, and a gamma ray and neutron spectrometer. In few months, Ceres will be ready for its close-up. [NASA Dawn Journal h/t @coreyspowell]