How A ‘Photoshop For Sound’ Could Transform Restaurants And Music Halls 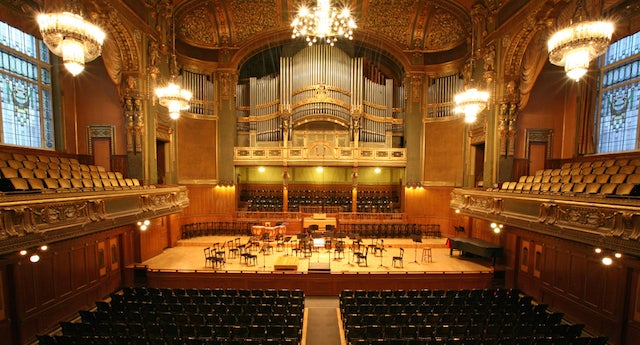 Restaurants have to strike a fine balance between eerily quiet and shouting-across-the-table loud. At Oakland’s Oliveto, the high-tech solution is a set of mics, speakers and sound-absorbing panels that constantly record, modify and pipe back the ideal background noise — essentially real-time Photoshop for sound.

“Each table is in its own sonic zone,” John explained. “But it’s not isolated.” He mentioned a colleague’s earlier attempt to address restaurant noise, which succeeded in suppressing chatter but led to a muffled, sterile environment: “Everyone hated it — the room ended up being completely dead.” Instead, Constellation undertakes a process akin to the Photoshopping of an image, with undesirable elements removed. John explained that there are two components to a sound as it resonates: the early reflections, which contain most of the intelligible information; and the later reverberation, which is blurrier. “Right now, with those loud people right behind me, we’re hearing only their reverb energy — it’s not enough for intelligibility. Early reflections have been cut out: you can hear voices but not what they’re saying.” The effect is conviviality without chaos.

Oliveto is taking sound design for restaurants to a whole new level, but Meyer Sound’s systems are, of course, most sought after in the world of music. In the piece, Ross also discusses attending a concert at a rehearsal space in San Francisco’s Davies Symphony Hall that’s outfitted with Constellation, an experience he finds striking if a bit “philosophically disquieting.” Does a Photoshop for sound enhance live music or does digital retouching destroy its soul? [The New Yorker]