Google's Reality-Bending Tablet Turned My Target Into An Icy Playground 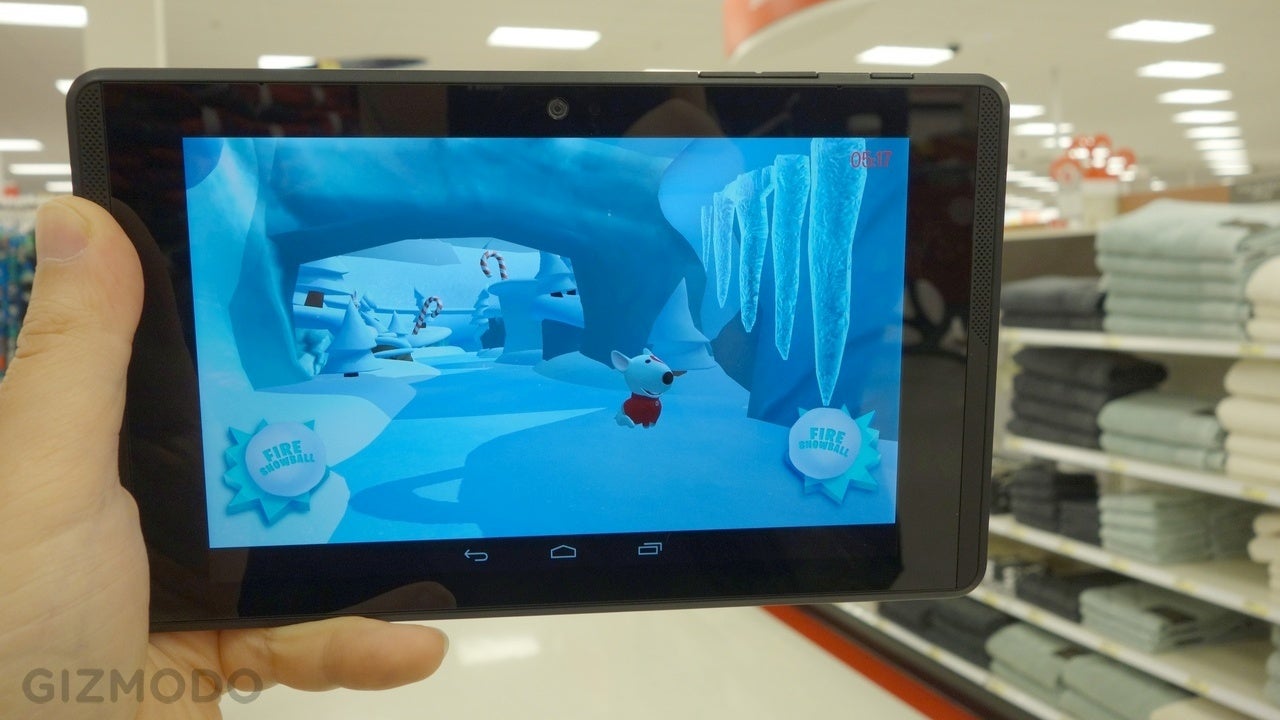 Imagine you're part of a big brand like Target. How do you convince customers you're cool? If you're not waiting around for one of your employees to become a viral teen hearthrob, how about thrusting them into a virtual reality world? In the latest example of VR advertising, Google and Target have teamed up to let shoppers explore a winter wonderland as they stride down the aisles.

It's all thanks to Google's 3D-sensing Project Tango tablets, which use an impressive combination of depth-sensing cameras and trackers to keep track of your position as you walk around. Is this a glimpse into the future of brands? Is it cool? I went to my local Sunnyvale Target store to find out.

Sure enough, anywhere you look — through the eyes of Tango — you see scenery right out of a kids' Christmas cartoon. Giant candy canes, musical icicles, a snowman warming himself by the fire in an igloo. There's a prancing animated deer and an ice-skating bear who winds up frozen in a giant ice cube. You can throw snowballs at a cartoony blue T-Rex at the end of the demo. It's cute.

But there's not a lot connecting the animated experience to the actual Target store. Only the rough shape of the store aisles is visible in the winter scenery, and I found myself looking through cash registers and shelves filled with product to see some of the little touches that creative agency Stinkdigital added to the world. It's nice that the experience isn't directly trying to sell me things, but it's not helping me buy things I want to buy either. If it weren't for Target mascot Bullseye the dog tagging along, I'd be wondering whether this had anything to do with Target at all. 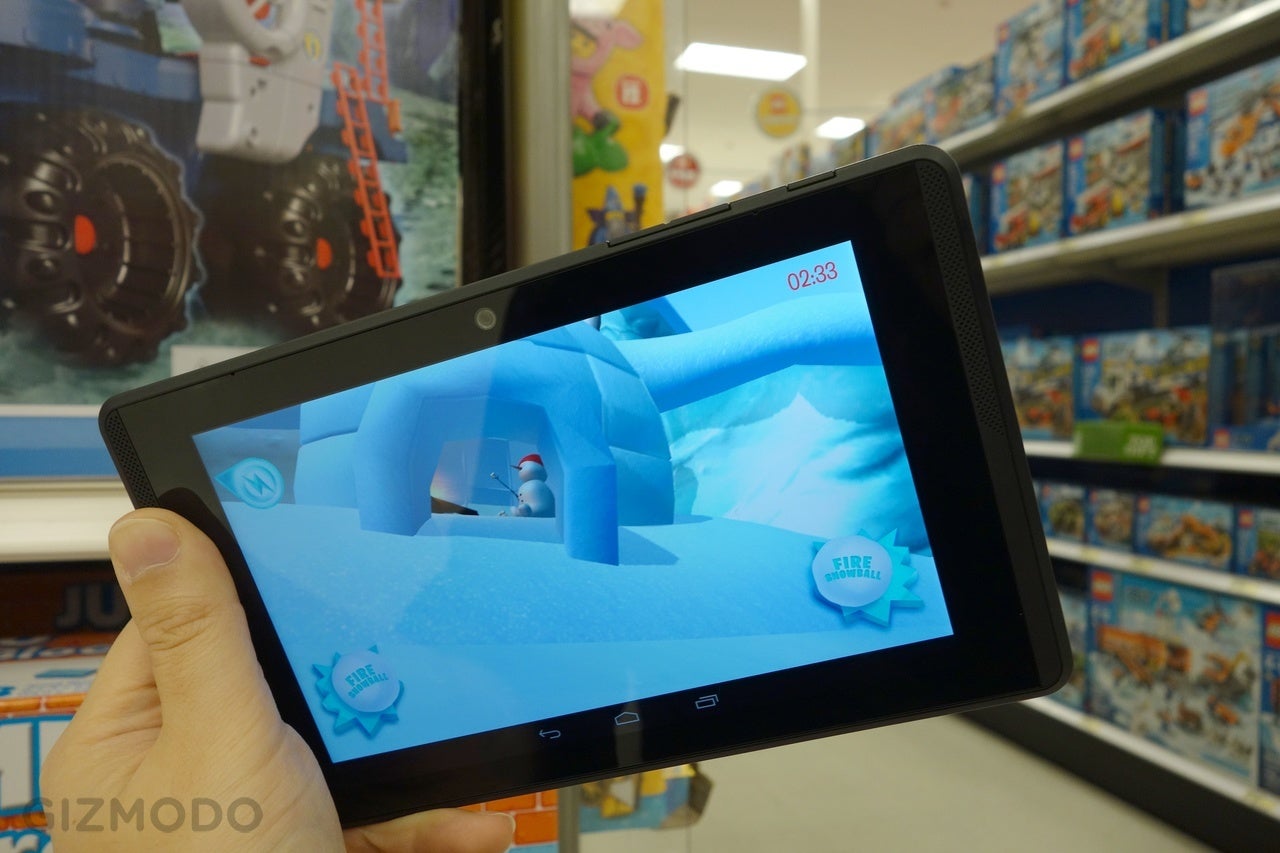 Perhaps the biggest challenge is the limited scope of Target and Google's demo. This Target-Tango demo is only available at four stores in the United States, and for only a few days before it comes to a close. You can only walk down three very specific aisles of the store: the tablet screen frosts over and tells you to TURN AROUND! should you go out of bounds. Augmented reality has its borders.

Google and Stinkdigital reps told me it came down to the technical constraints of the current Project Tango setup. Using the Tango's cameras and sensors, the team only needed a few hours at each Target store to create a digital map of what the interior looks like — so that subsequent Tango tablets could find their way around — but the tablet doesn't actually build the corresponding virtual world on the fly. Every inch had to be handmade in the Unity game engine for each of those store aisles. It's the same as the common criticism of Google's self-driving cars: They only go places that have already been carefully mapped out. 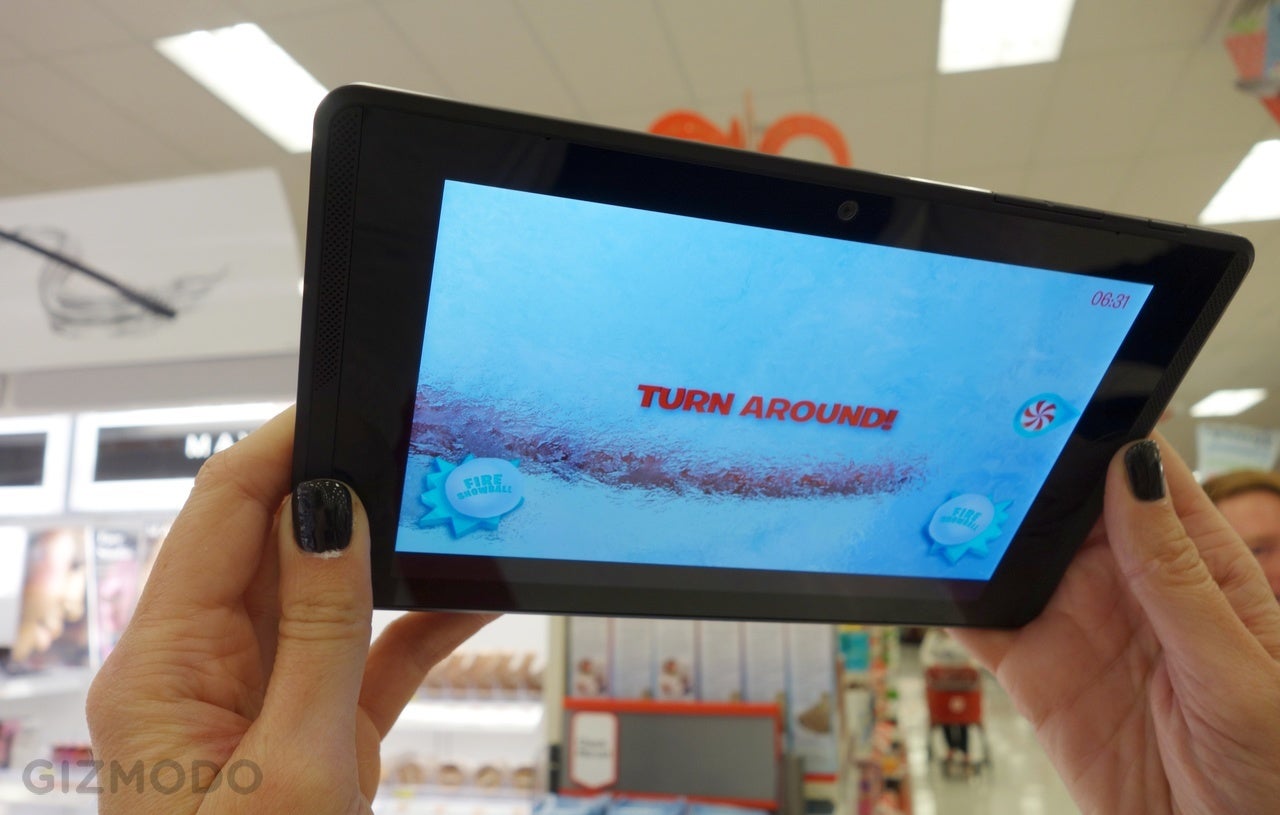 Still, Google has wider ambitions for Project Tango than amusing shoppers. In June, it showed off a parallel project with Walgreens and aisle411 to help those shoppers actually find items on shelves. Google also says it's currently working with "a dozen high visibility brands across numerous verticals" to take advantage of Project Tango's abilities, and hopes to reveal more in the spring. The hardware will eventually be available for regular consumers too. While the developer tablet costs $US1024 and is currently out of stock, LG has promised a consumer product that includes Project Tango sensors sometime next year.