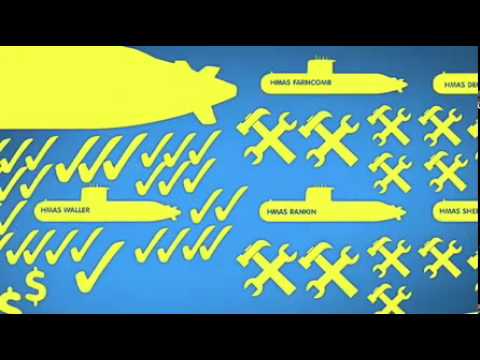 Let’s face it, Australia’s submarine fleet isn’t the best. After getting through almost two decades of problems with the Collins-class submarine fleet, the government’s shipbuilder is coming under attack again, this time by the Government minister responsible for Defence, who says he wouldn’t trust them to build a canoe.

The Australian Submarine Company, or ASC, is a government-owned shipbuilder which is working out of Adelaide to build new Air Warfare Destroyers for the Australian Navy. Previously, the ASC won a multi-billion dollar contract to build the issue-laden Collins-class submarines and continues to maintain them.

Now enter the Defence Minister, Senator David Johnston, who launched into a spirited attack on the ASC yesterday in the Senate which today has the Abbott Government backpedalling.

After outlining a series of delays and budget blowouts by the ASC, the Senator shouted across the Chamber as part of his remarks: “You wonder why I’m worried about ASC and what they’re delivering to the Australian taxpayer, you wonder why I wouldn’t trust them to build a canoe?!”

In the Senator’s defence, Australia’s voyage towards having a world-class submarine fleet has been a troubled one, with a series of delays, shoddy builds and poor decisions plaguing the Collins-class fleet back in the early-2000s. Check out the video that Hungry Beast put out a while ago for a look at the big picture on that one.

Still, it was a stupid thing for the Defence Minister to say out loud.

Senator Johnston has been lashed for his comments, both by Senators opposite him in the Chamber and members of the South Australian government where the ASC is based.