Watch A Symphony Of Independent Buskers Perform Together Online 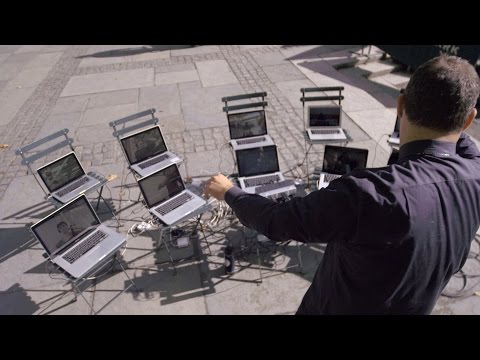 Oh this is wonderful. A symphony of Wi-Fi enabled, independent subway buskers were united by a composer named Ljova, who streamed their performances from different stations onto individual laptops set up in the middle of New York City’s Bryant Park. The result? “Signal Strength”, a very awesome collaboration.

Each of the musicians set up a smartphone to record themselves for this “live experiment”. At the same time, they were a also viewing Ljova’s movements in real-time and following the sheet music he passed out before the harmonic fun kicked off. Everyone brought their own style to the track using a mix of instruments and vocal tricks for a tune that is just so damn kicky. I mean: Accordion! Cello! Beat box! Bass! Theremin! Trumpet! Viola! Hell yes.

Filmmaker Chris Shimojima let me know over email that there was less than a half-second of lag-time, which was edited out at some points, and they did do multiple takes to get some different angles. All in all, the video is great and the SoundCloud’s great and yeah, this is a nice little project right here. Bravo. Encore! [Prosthetic Knowledge]