Pentagon Got $US1 ($1) Billion to Fight Coronavirus, Bought Drones, Jet...

One Of The Most Bizarre, Yet Fascinating Mechanical Locks You’ll Ever See 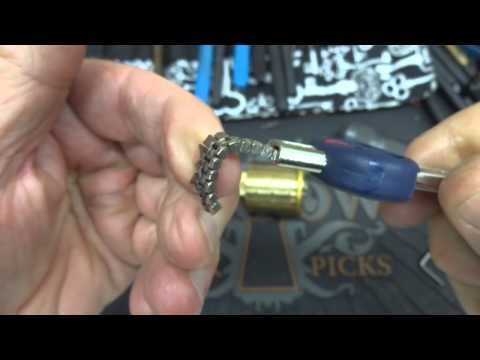 Locks are cool, right? They keep you and your precious things safe, prevent potentially-dangerous persons from enacting dangerousness and deter would-be snoopers from reading the thrilling page-turner that is your diary. But you can get more creative than just your basic key and tumbler, like this interesting (and rare) curiosity that features more curves than your average lock .

The three-and-a-half minute video from LockTube investigates the unusual design, which seems overly complicated to begin with, but reveals its elegance as its details are explored:

I’m not going to take this lock apart, because it is so rare, and when you look down inside of here … I’m kind of afraid to [take it apart] because it looks like there’s about 100 little disks all up inside of there … the key way is also not straight — it’s a serpentine … which means standard picks — I can only pick the first pin.

The reviewer then shows how the key is inserted and removed from the lock, with the latter step much like a “hypodermic needle”. With its sheath removed, the key itself is basically a chain, with no structure of its own to stay straight.

While the clip itself provides no information as to the lock’s origin, a comment — later added to the clip’s description — shares some insight: