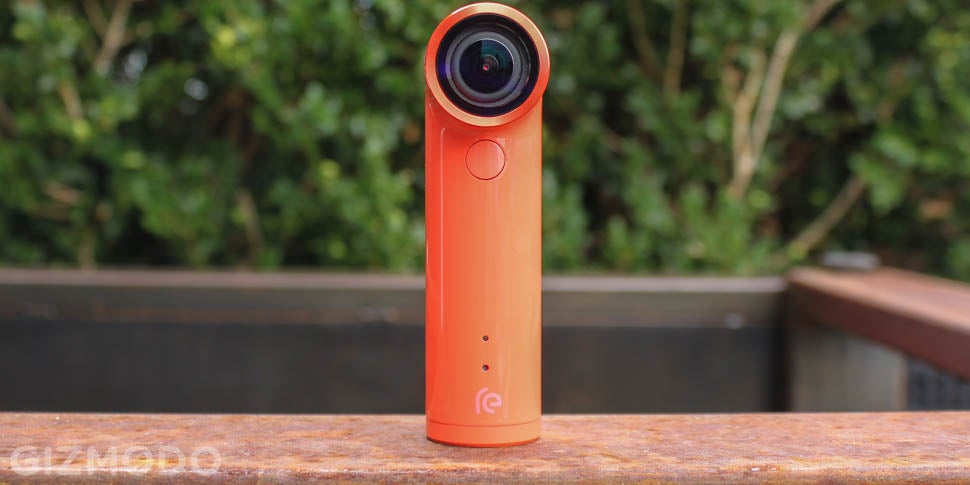 So HTC thinks it can make a camera, eh? We’ll see about that. We were in New York last week with one of the very first Re camera units from HTC, and we decided to put it through its paces around the City That Never Sleeps.

HTC’s philosophy is that we’re all trapped behind the screens of our smartphones when we capture important moments in our lives, whether that’s a child’s birthday or a Jay-Z concert. RE is lightweight, simple, and out of the way so that allegedly, documenting your life doesn’t keep you from actually experiencing it. RE is meant to appeal to selfie-taking teens, busy parents, and urban socialites in need of an easier way to take photos. But it’s hard to say if those people would pay $US200 for this GoPro alternative when it arrives later this month.

The Re is HTC’s newest product. It’s basically like a mini-periscope for your hands. Or, if you’ve ever seen a Ventolin inhaler, you’re spot on. It’s equipped with a grip-sensor so the Re knows when you’ve picked it up in order to turn on, and capturing photos and videos is delivered via a giant button on the top of the device mounted towards the user. Your thumb naturally falls on it and it’s a great way to snap an image, given that a little pulse tells you that the shot is safely stored inside the microSD card.

The Re is waterproof in one metre of water for 30 minutes thanks to an IPX7 certification, or you can buy an optional cap to clip over the bottom of the device where the USB slot lives which turns it into an IPX8 device. That’s three metres of immersion for up to two hours whilst still being waterproof.

The battery allows for 100 minutes of HD video recording, or for 1000 photos. So you can get back in the action quickly (because who remembers to charge their action camera before they go?), HTC has given the Re a fast-charge capability that gives it 100 per cent of its charge within two hours.

Although comfortable, the way you hold RE feels aggressive. Sometimes it’s like your fingers are wrapped around the handle of some weapon or your thumb poised over the button of a detonator.

That’s where simplicity comes in: that detonator button is one of only two hardware controls on the entire camera. The top chrome circle is the capture key. One quick press, and you snap a photo. Press and hold, and you switch over to video capture. The camera communicates through a series of Tamagotchi-like beeps to indicate when recording, switching modes, or taking a photo. Also like a Tamagotchi, it can get reeeaaallly annoying after a while. Luckily, there’s a silent setting. The other button is on the front of the device, right under the scratch-resistant lens, and only lets you switch in and out of the camera’s slow-motion mode. Below that is a status LED that gives warnings on battery life and mode selection, and the microUSB port and microSD card slot on the bottom just about rounds out the tour.

Picking the Re up turns it on, as a grip sensor automatically detects your hands around the body, and images are captured in an instant. To be honest, I wasn’t expecting a whole lot of photos captured with the Re. Sure, it’s a great device, and fits into the hand beautifully, but I was concerned that something so small couldn’t possibly produce a worthwhile image. I was wrong.

In well-lit situations, the HTC Re outperforms even the best smartphone cameras with stunning images and superb clarity. Low-light is manageable, but you’re still going to want to use a real camera to get the best results.

A few concerns emerged during our hands-on session, however, that lose the Re a few marks. First of all, the shutter button and subsequent capture speed. Once you hit the button under your thumb, you’re waiting almost a second for an image to be captured, which means you need to time your shutter-press perfectly to capture beautiful shots in motion. Someone crossing a finish line in a race or someone in mid-air for example would be shots you’d probably miss with the Re. There probably needs to be a better burst mode you can activate in an instant to grab photos fast.

The other concern is the orientation of the device when it’s held in the hand. Phones and cameras are great for capturing straight pictures, simply because you understand the horizon line while capturing the image. It’s a rectangular device most of the time, so framing up a halfway straight image is easy. With the Re it’s damn near impossible, because every time you think you’re grabbing a straight image, you end up with a skewed shot. Of course, you can change it later or even change it as you capture by using the companion app, but that kind of defeats the purpose of a portable, adorable action camera doesn’t it?

The Re grabs great images, but it’s not without its flaws. We look forward to pushing it even further when we get one in for review! In the meantime, check out the Flickr gallery of test shots taken above.

Luke Hopewell travelled to New York as a guest of HTC