Why We Still Don't Have An Ebola Vaccine

More than 1900 people have died in this year's Ebola outbreak in West Africa. The World Health Organisation says nearly all of the 3500 confirmed or suspected infections result from human-to-human transmission. Amid emergency WHO meetings and frenzied containment efforts, where is the Ebola vaccine?

The good news is, an experimental vaccine exists, and the National Institutes of Health began emergency human trials this week in response to the ongoing West African crisis. The bad news is that even in the best case, the vaccine won't be available until the end of the year at the very soonest, perhaps not until 2015. Blame Ebola's rarity, its disappearance for years at a time, and the fact that diseases spread fast and vaccines come slow.

The NIH's Vaccine Research Center's experimental Ebola vaccine was developed in partnership with Okairos, a Swiss-Italian vaccine developer owned by pharma giant GlaxoSmithKline. This vaccine was just approved for urgent testing in humans, with the first two patients receiving doses on Tuesday and Wednesday of this week.

The NIH describes this vaccine as "a chimpanzee adenovirus vector [...] into which two Ebola genes have been inserted." In other words, the vaccine packs Ebola DNA inside a shell derived from a virus that's infective in chimpanzees, but not humans. That virus inserts its genetic payload into the host's cells, without replicating wildly the way disease viruses do. 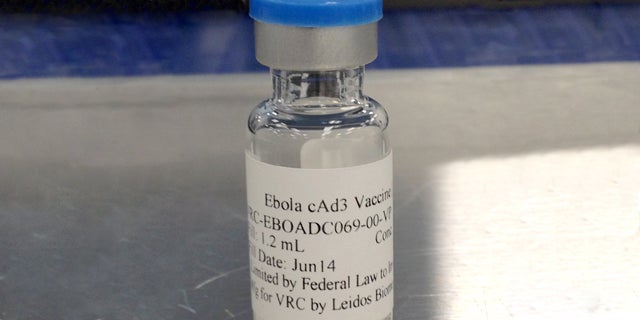 Once inside the host cells, the Ebola genes cause the body to make a protein which then triggers the host's immune system. That protein is not disease-causing, but it's very similar to a protein that's part of the Ebola virus, so in the process of clearing the vaccine-derived protein from the body, the host's immune system will naturally attack any Ebola virus it finds roaming around.

The NIH has also been investigating an Ebola vaccine based on existing vaccines that protect against rabies. Testing in mice and rhesus monkeys showed that this vaccine can protect against both Ebola and rabies. Research now focuses on testing the combination vaccine more broadly, both in humans and to prevent transmission from wildlife.

There are a handful of others. Canada's National Microbiology Lab developed an experimental vaccine that both prevents infection and helps recently-infected patients clear the Ebola virus. Canada has promised to send 1,000 doses to the WHO. Bioscience companies Profectus Biosciences, Crucell, and Immunovaccine all have experimental Ebola vaccines in early, pre-human stages of testing.

Why's It Taking So Long?

The current Ebola outbreak is the worst in history — already, it's claimed more lives than every previous outbreak combined. The WHO hopes to have worldwide transmission under control within the next six to nine months. That's a long time.

But even in light of all those scary numbers, Ebola is still an exceedingly rare disease. Since its discovery, the virus has claimed around 3,500 lives. In the field of communicable diseases, that's an exceedingly small number, and it's meant that, prior to this most recent outbreak, there simply weren't a lot of human Ebola patients for doctors and scientists to study.

"There's always the layperson's query of 'Why don't they rush this?' 'Why don't these guys work a little later at night?'" Dr. William Schaffner, chair of preventative medicine at Vanderbilt University, tells ABC News. "It's a little more complicated than that."

Ebola was only discovered very recently, in 1976. The disease lurks in chimpanzees, gorillas, fruit bats, monkeys, antelope, and porcupines. Outbreaks often start in remote areas of West Africa, far from the researchers and scientists best equipped to study it. And when those outbreaks occur, containment efforts are the first priority.

That's to say nothing of costs: The WHO estimates it will need $US600 million to fight the current outbreak. Developing vaccines is an expensive proposition, and one with an uncertain payoff — who's to say how big the next outbreak will be? And will the vaccine even be effective against a newly-mutated strain?

What Else Is There?

Not much. The standard treatment for Ebola patients is basic supportive care: Keep the patient hydrated and fed, manage fever or other infections, and maintain proper breathing and blood pressure. Basically, all doctors can do is give the patient's immune system everything it needs to mount its best defence and (hopefully) clear the infection — while also keeping the patient completely isolated to keep the infection from spreading to caretakers.

There are also experimental treatments, largely-untested methods that would not have made it outside of the research lab were it not for the size and scope of the current outbreak. One of them is Zmapp, which supplies the patient with antibodies that directly bind to the Ebola virus, generated in mice and modified to work with the human body. These antibodies tag the Ebola virus, marking it for destruction by the patient's immune system.

This drug was on the slow road to testing, having shown some effectiveness in monkeys. When two American aid workers were diagnosed with Ebola in Liberia, Zmapp was given an exemption from the standard course of testing. Despite there only being a few dozen doses in existence, both Americans were treated with Zmapp. They both survived, but of the five other Ebola patients given Zmapp during this outbreak, two have died.

Researchers are also experimenting with giving Ebola patients blood transfusions from Ebola survivors who are no longer infected. This method operates on the same principle as Zmapp: supply the patient with the antibodies that bind the virus and tell the immune system to destroy it. Only this time, the antibody comes from humans. With thousands of Ebola survivors living in Africa, there's a huge potential reservoir of donor blood.

This technique is largely untested though, and serious questions remain. "You would need to come up with how much you should give, how long, and what's a safe infusion rate," Dr. Michael Kurilla, director of BioDefense at the U.S. National Institutes of Health, told the Associated Press. "If you know what the potency of the serum is, you could theoretically help the body clear Ebola out of their cells before it can do too much damage."

As of right now, there have been no studies done to determine the ideal levels of antibodies in a unit of donor blood. Each patient's antibody production level differs, meaning not every transfusion could be effective. And that's on top of the standard concerns regarding blood transfusion, like screening for HIV, malaria, or other infections, and keeping the blood chilled and viable between donation and transfusion. Aid workers are desperate though, and in addition to Zmapp, American doctor Kent Brantly received a blood transfusion from a 14-year-old Ebola survivor.

This week's emergency meeting will help the WHO plan a course of action, determining which of these somewhat unproven treatments is sound enough, or promising enough, to be used in the current fight to contain Ebola's spread. If that sounds a little haphazard, it is. But it's also the best shot we have, in the absence of reliable cures or rigorously tested vaccines.

When Will It Work?

This week began Phase 1 clinical trials for the Ebola vaccine. This is the most preliminary human testing, where healthy patients who have never been infected with Ebola are given low doses of the drug and monitored for side effects. This stage doesn't test the drug's effectiveness against a disease — it merely helps determine a threshold for safe dosing that won't cause undue side effects or averse reactions. Phase 2 involves testing in a larger group, and studies a drug's effectiveness in treating or preventing disease in humans. Then comes Phase 3, testing in a large group to compare the experimental drug's effectiveness to other methods.

All of this takes time: The average drug takes 12 years to go from discovery to market availability, and only one in 5000 experimental drugs is good enough to survive the testing process.

The Ebola vaccine, of course, is a special case. Medical governing bodies lift their normal requirements for promising drugs in extenuating circumstances, and the current Ebola outbreak certainly counts as one. That's why Phase 1 study is kicking in now, with 140 healthy human subjects slated to receive the drug in the US, England, Gambia and Mali over the next few months.

Dr Anthony Fauci, director of the NIH's National Institute of Allergy and Infectious Diseases, previously told ABC News that the vaccine wouldn't reach health workers until 2015. Now that timetable had speeded up significantly, with GlaxoSmithKline revving up to produce 10,000 doses of the vaccine, and the NIH forecasting that initial trial data will be available by the end of this year.

With any luck, the current Ebola outbreak will subside, but the research will continue. That's the best-case scenario. Given the WHO is predicting some 20,000 people could be infected before the epidemic is brought under control and there's been a 47 per cent survival rate in the current outbreak, advances in Ebola care can't come soon enough.

Picture: AP. This undated handout photo provided by National Institute of Allergy and Infectious Diseases and GlaxoSmithKline (NIAID/GSK) shows a vaccine candidate, in a vial, that will be used in the upcoming human Ebola trials.