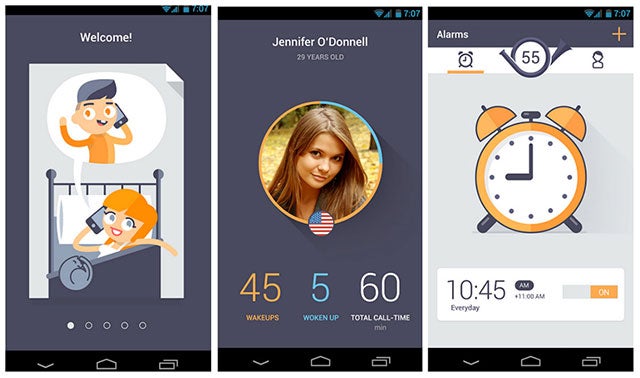 Wakie is an Android and Windows Phone app (iOS is currently in the approval process) that lets complete strangers dial you up to help get your arse out of bed, and I couldn't think of anything more terrifying.

Here's how the app works. After signing in with your phone number, the app splits users into two groups: Sleepyheads and Wakies. Sleepyheads are the slumbering people who need waking, and Wakies are the users tasked with getting the job done. After that, it's similar to your standard hotel room wakeup service, except for one key difference. According to The Next Web, Wakie tries to pair you with a caller around your age and of the opposite gender, turning your first early morning moments into some bizarre, heterosexual dating game. I can't imagine this ever being very successful while conversing in fluent half-garbled, morning zombie responses.

If there happens to be no Wakies available to get you up, the app reverts to your everyday, dull alarm clock. No numbers are ever shared between between the two parties, unles you guys hit it off, I guess, and conversations are immediately terminated after 1 minute. Before coming to the states, Wakie cultivated a strong international following, especially in Russia, and reports that 1.5 million users have placed 30 million wake up calls.

Sure, this app may be too weird for most and its UX could use some design help, but Wakie is another addition in a growing trend of putting real human interaction back into the technology we use in our lives. Last week, we heard about Somebody, a strange little app that doesn't text its intended recipient but instead a nearby Somebody user who then delivers the message — a type of on-the-fly telegram service. Earlier in August we also saw Ooloo, a virtual assistant much like Siri or Cortana, but powered by in-the-flesh humans rather than lines of complex code and algorithms.

This may all be an outdated, low-tech way of coping with multi-billion dollar companies with almost unlimited R&D or maybe there is a small need for some real human interaction in our various apps and online services. I'm just not sure I need it in my alarm clock. [Android, Windows Phone]