Scientists Have Discovered (Maybe) The Biggest Dinosaur Ever

Scientists have discovered a new species of dinosaur in Argentina, and it was a very, very big boy. Weighing in at 59 tonnes, the awesomely-named Dreadnoughtus was one of the biggest creatures to ever live.

The new member of the Titanosaur family had a 11m long neck, had a 9m long tail, and was still growing when it died out. To put its size into perspective, it was:

And once again, for emphasis, the Dreadnoughtus was still growing when it died out. 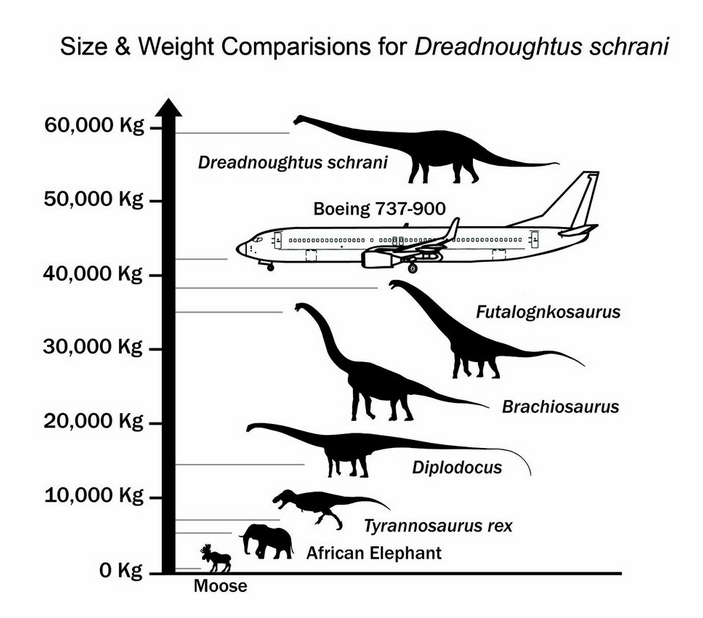 How do scientists know all this? The well-preserved skeleton they discovered is the most complete of any of the Titanosaur family, with 70 per cent of his bones found. This allowed researchers to estimate his weight in life. It's the first time scientists have been able to do this for this group of dinos. Although, they can't say with certainty that the big guy was actually the biggest dinosaur; There are a lot of other 'saurs out there gunning for the title, including the Supersaurus, the Giraffatitan, and the Argentinosaurus, all of which have great names and are members of the Titanosaur crew.

"Can we say Dreadnoughtus is the biggest ever? No. We can say that Dreadnoughtus has the largest calculable mass of any known land animal," said Dr. Kenneth Lacovara, the Drexel University researcher who led team that found and analysed the 16 tons worth of bones.

Soon you will probably have a chance to see the bones for yourself, at least online — scientists made laser scans of all 145 bones and plan to post them on the internet. The dinosaur's size, however, you'll just have to imagine. [Drexel University via WSJ]