My Dive Into Sensory Deprivation's Naked, Wet Quest For Enlightenment 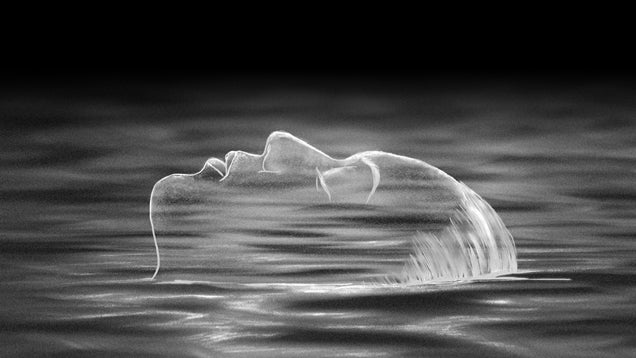 You are butt-naked in total darkness. Sopping wet and totally alone, the space you're in is so small that you can't stand. The only sound is the thud of your heart. You are a mewling human baby in a mechanical womb.

Floating is the term used by blissed-out fans to describe sessions in sensory deprivation tanks, sometimes called isolation chambers. These tanks are filled with a buoyant layer of water, and people who enter float on top of the water in a soundless, lightless environment. It's also called REST ("restricted environment stimulation technique") and float centres all across North America and Europe sell time slots in their tanks to enthusiasts.

There are a few different styles of tank, but all offer a solitary, dark environment for quiet reflection, a chance to search for the unfathomable in .14 fathom of skin-temperature water.

For advocates of sensory deprivation, the isolated hours are hardly anguished: They summon a calming, meditative state — like a yoga retreat, without all the bending and sweating and chakra-contemplating. Vocal proponents include MMA fighter Pat Healy and comedian Joe Rogan.

Floating got fashionable enough in the '80s that the New York Times wrote a trend piece about it, but the hobby lost popularity after people got creeped out by the idea of sharing water with strangers. Nowadays, filtration systems are better, alternative health treatments have gone mainstream, and float centres are once again on the rise. There's even an annual conference, organised by a veteran center in Portland, Oregon.

A new center, Float Toronto, opened its doors this summer a few blocks from my apartment in Toronto. I went to see whether I could achieve inner peace by blocking out the world, or whether I'd literally just end up all wet.

We all float on

When I walked into Float, it was very zen, what I imagine an expensive spa for sensitive artists would be like. Pink salt crystal lamps were arranged on various artisanal wood tables, for air purification. I remembered reading that Yoko Ono loves sensory deprivation chambers. It made sense. I half-expected to see her lounging on an organic pillow engrossed in a guttural chant. Instead there was just a polite, non-famous customer who asked me if I'd floated before.

I was sure that Yoko Ono would approve of this space, but less assured about myself. I had a head cold and a lingering hangover from a weekend of back-to-back weddings; I worried I'd be floating alone with nothing on my mind other than my malaise and self-indulgence. I worried I'd feel like a naked, bougie idiot. The idea of being enclosed in a small space without light is scary, as was the possibility that I'd have a hallucination or emerge passionately devoted to interspecies communication.

Over the next few hours, I would both fear for my life and think the entire operation was overhyped… and then emerge a reluctant convert.

The man who would be buoyant

There was a reason I feared hallucinations about talking to dolphins. The sensory deprivation tank has a colourful backstory, and not in a casually quirky way. I'm talking psychotropic drug abuse and dolphin/human sex.

The modern tank was invented in 1954 by John C. Lilly, a physician and neuropsychologist. Lilly came from a family of bankers and socialites and went to Ivy League schools, but he wanted nothing to do with the stock market or scotch or other normal rich white fancyman pursuits. He developed the tank while working for the US Public Health Service Commissioned Officers Corps.

Lilly's attempts to isolate the human mind from external stimuli was possibly his least offbeat endeavour. Afterwards, he created the Communication Research Institute on St. Thomas in the Virgin Islands, a research center devoted to communicating with dolphins.

He began ingesting Hunter S. Thompson-levels of LSD, ketamine, and other drugs, both before he entered the tank and when he was trying to talk to the dolphins. He encouraged a research assistant to have manual sex with a dolphin named Peter in an attempt to teach him to talk.

Then Lilly became convinced that he'd unlocked knowledge of a galactic hierarchy whilst tripping balls in his float tank. His life became fodder for a horror movie called Altered States, but his career as a scientist was about as fucked as Pete the dolphin. 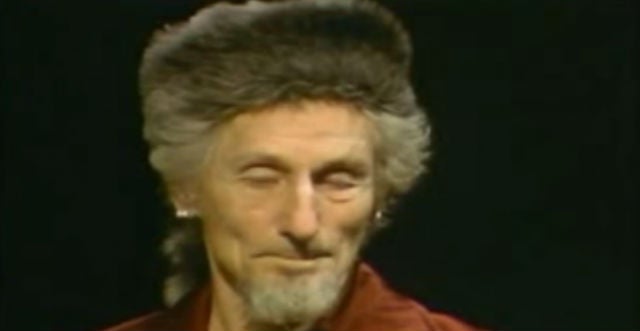 While Lilly's projects grew more and more like something a drugged-out Reiki enthusiast would write about in an Erowid forum, his earlier work on sensory deprivation has had a lasting legacy. There is research pointing to several potential health benefits from REST, including pain reduction and stress reduction. It has been shown to decrease alpha waves and increase theta waves in the brain, similar to meditation and sleep.

Dr. Peter Suedfeld, a REST researcher, credits float tanks with helping "problems involving the autonomic nervous system, such as insomnia, stress symptoms, dysfunctions of the skeleto-muscular system, chronic headache, and the like," he told Men's Journal. Portland center Float On is collaborating with other centres on a research project to showcase REST as a way to reduce fibromyalgia pain. Athletes from Carl Lewis to the Philadelphia Eagles to the Australian Olympic team have used float tanks.

There is no rock-solid study proving that, yep, floating makes you a better athlete or can definitively improve your mental health. Most of the hype around the treatment is anecdotal and spreads by word of mouth. It doesn't help that the tanks have an inventor more known for drugs and beastiality.

Tune in, drop out, get in the tank

So yeah, I was sceptical about what was about to happen to me.

Before I went into my private tank room, I chatted with the surprisingly young guys who own Float, Sean Lavery and Jesse Ratner-Decle. It turned out we had mutual friends who I knew to be non-hippies, which was comforting. Nutritionists from Vancouver, the pair are gentle evangelists for REST. They don't exude that kind of aggressive crunchiness you get at independently-run yoga studios, but they were clearly excited about their tanks and their new business.

Lavery showed me to my tank, explaining that my float time would be 60 minutes, though some people chose to book back-to-back floats.

Float provides thick white bathrobe and towel, and your choice between silicon and foam earplugs. I was instructed to disrobe, take a shower, thoroughly dry my ears and face and then enter the tank. Peaceful music would alert me when my time was up.

The bottom of the tank was swimming-pool blue. I did as instructed and stepped into the 10-inch bath, shutting the door behind me and hoping that I wouldn't be the first person to die in a sensory deprivation tank. 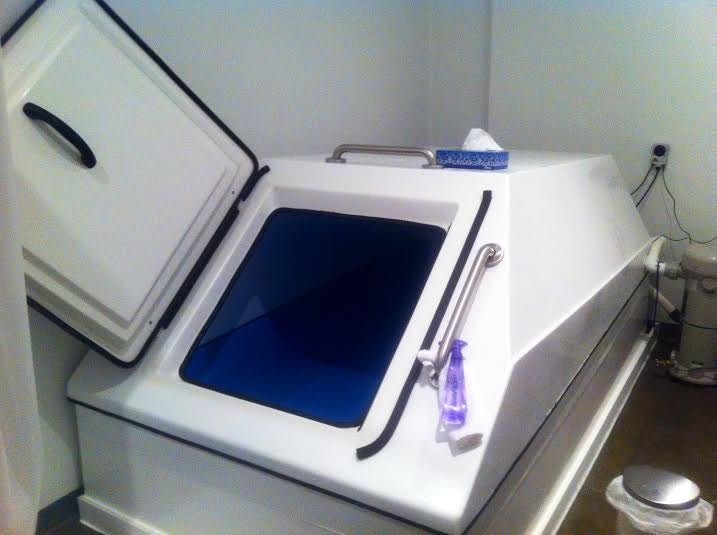 It was immediately, intensely dark. I'd already read about how buoyant the water was,but I was still impressed when I felt it myself. 850 pounds of Epsom salts are dissolved into each tank to achieve the high level of buoyancy. Since Epsom salts contain magnesium, the water gains a silky, slippery texture.

The next 10 or so minutes passed very slowly. The water, kept at 94.5 degrees Fahrenheit, is so close to the temperature of your skin that it doesn't feel like much of anything. I knew I was wet, intellectually, but it was such a neutral sensation that I couldn't tell which parts of me were in the water and which parts were out. I tested if it was actually as hard to roll over as they said, in case I fell asleep. It was very hard to roll over. I rested my hands on my belly, like an otter, and wondered if I could will myself to hallucinate that I had an otter friend. Even devoid of external stimuli, I do not have that kind of mind control. I remained otter-spirit-guide free.

Time began moving more quickly. I didn't fall asleep or hallucinate. I did not bellow into an infinite abyss of the soul. I decided to cook the frozen tilapia for dinner, and that I would go to the gym tomorrow. I wondered if any of the other clients had ever peed in the tank (I did not pee in the tank). I waited for my mind to bloom and expand, and then felt dumb about waiting for some new-agey crap I didn't believe in. I wondered again if I was being a naked bougie idiot. I bounced my feet against the back of the tank until my head hit the top, the water splashing replacing the stillness. Then I started feeling very mellow.

As the music came on to signal the end of the session, I don't know what I was thinking. Although I hadn't fallen asleep, at some point I'd slipped into that liminal space between sleeping and waking. I felt like I'd slept well for hours.

I reached for the door as I congratulating myself on being so goddamn rejuvenated. But it wasn't there! "Oh shit," I thought, "I either did start to hallucinate and I need to snap out of this, or this is a very elaborate murder plot." As my hands felt for a handle and found nothing, I started to panic again. I began banging on the side of the tank. Then I put my hand on the other side of the tank and felt the handle. I'd disoriented myself into a weird sideways position. I'd been trying to open the side of the tank. Grateful that no one had noticed my frantic banging before I figured it out, I climbed out, took a shower, and went back out to talk to the owners.

Complimentary loose grapefruit rooibos tea was on offer. I had several cups as I talked to the owners. Anyone who turns down fancy tea is a fool, that shit has antioxidants. I felt like Shailene Woodley. I was refreshed and somehow both clear-headed and spacey. Even though I'd spent what felt like forever in the tank thinking I was immune to tranquil meditation, I felt incredibly tranquil.

Flipping through a guest book at Float put out so people can journal about their experiences, I read some stuff that made me cringe; poems about spirits leaping out of bodies and doodles of daisy chains representing, I assume, childlike bliss. As much as I couldn't help eye-roll some of the entries, I couldn't deny that I just felt better. I immediately recommended it to my partner and parents, even suggesting that I'd buy them a float as gifts. I still feel better, days later.

These float centres aren't cheap. A single hour session costs $US60 at Float Toronto, and most prices I've seen elsewhere are comparable. If they are selling snake oil, it's an expensive brand. But man, if it's not, I can see places like this taking off. After all, $US60 isn't so unreasonable when it's the difference between feeling like someone ran you over with a hangover truck and feeling like you just got a hugged by baby Jesus on a fragrant mountain.

But if I start talking about manually pleasuring dolphins in a few weeks, you'll know what to blame.