Moshi SenseCover Review: Answer Your iPhone Without Opening Its Case

If there's one thing that can divide iPhone users, it's the debate over whether to hide their precious handset inside a fancy case. Some prefer the feel of a naked iPhone in their hand, while others don't trust themselves carrying it around unprotected.

For the latter demographic, Moshi has created a book-style case called the SenseCover that does a little bit more than just protect your phone. Using a clever conductive strip and a clear window, it also provides a sneak peek at the screen, and the ability to answer calls, without ever opening it.

Unlike the iPad, Apple's iPhone has no mechanism to automatically unlock the screen when a cover is opened, even as competitor Samsung offers the useful S-View flip cover for its Galaxy smartphones. But Moshi's SenseCover case brings some of the same functionality to the iPhone, without requiring any hardware modifications or apps to be installed. 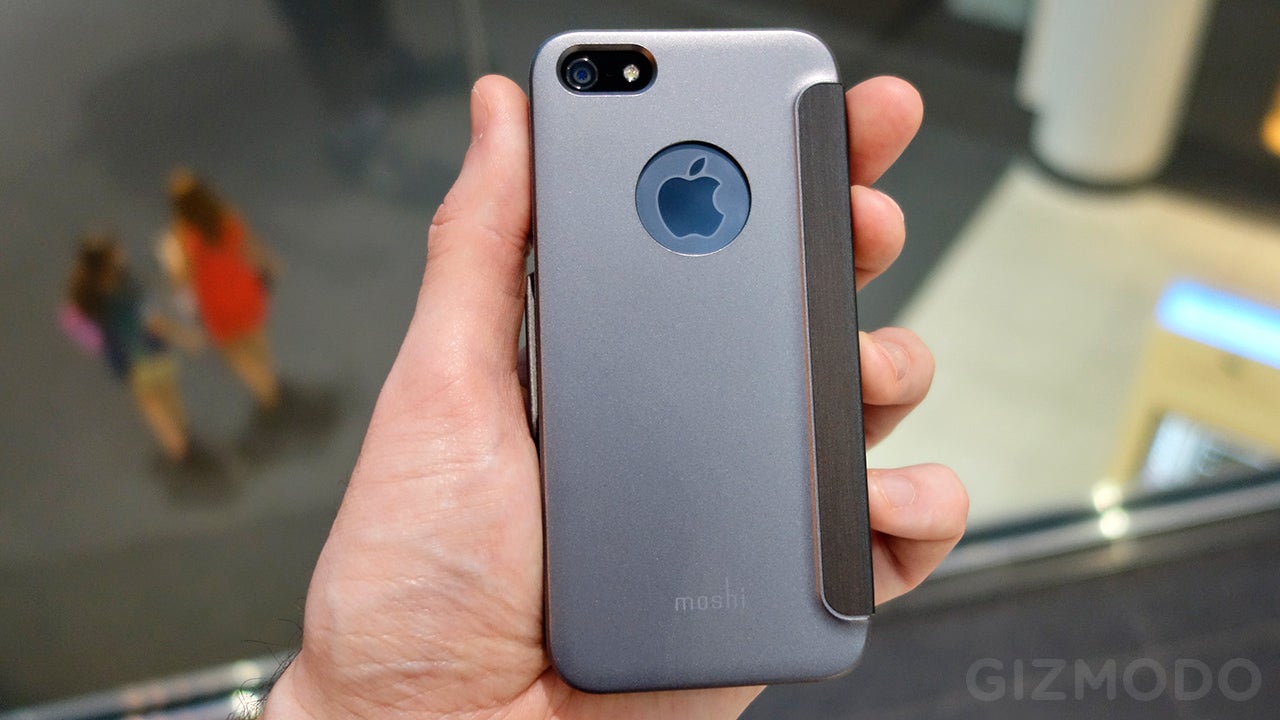 The SenseCover is composed of a touch polycarbonate shell that your iPhone easily snaps into, and what Moshi calls a "leatherette" cover that wraps around the front. The phone is held in place by all four corners, but it's not excessively snug. You can pull it out as needed. When closed, the leatherette cover is held shut with a magnet attached to a small tab on the side of the case, and it does a good job at staying closed and protecting the iPhone's screen while it's being jostled around in a bag or a pocket.

Still, we're not talking rare-earth magnet strength here. It doesn't hold particularly strong, and even a minor fall could see it popping open and exposing your iPhone's display. The shell, too, doesn't hold your iPhone so tightly that you'd feel comfortable letting your phone drop onto a hard surface. There's a good chance it could accidentally pop out and get damaged. The SenseCover case is better suited to protect your device from nicks, scratches, and other minor run-ins that could mar its shiny sheen.

The back of the case features holes for the iPhone's camera and flash, as well as a cutout revealing the Apple logo, while the top and bottom are left open so you still have easy access to the phone's lock button, headphone jack, Lightning port, and speakers. Heads up: if your headphones have a particularly thick jack on the end of their audio cable, you may not be able to connect them through this case.

It's also important to note that the iPhone's volume buttons and silent mode toggle get covered when the SenseCover case is closed, and while the volume can still be adjusted through the hinge, the silent mode can only be toggled when the cover is open. But that's certainly not a deal breaker, just a minor inconvenience. 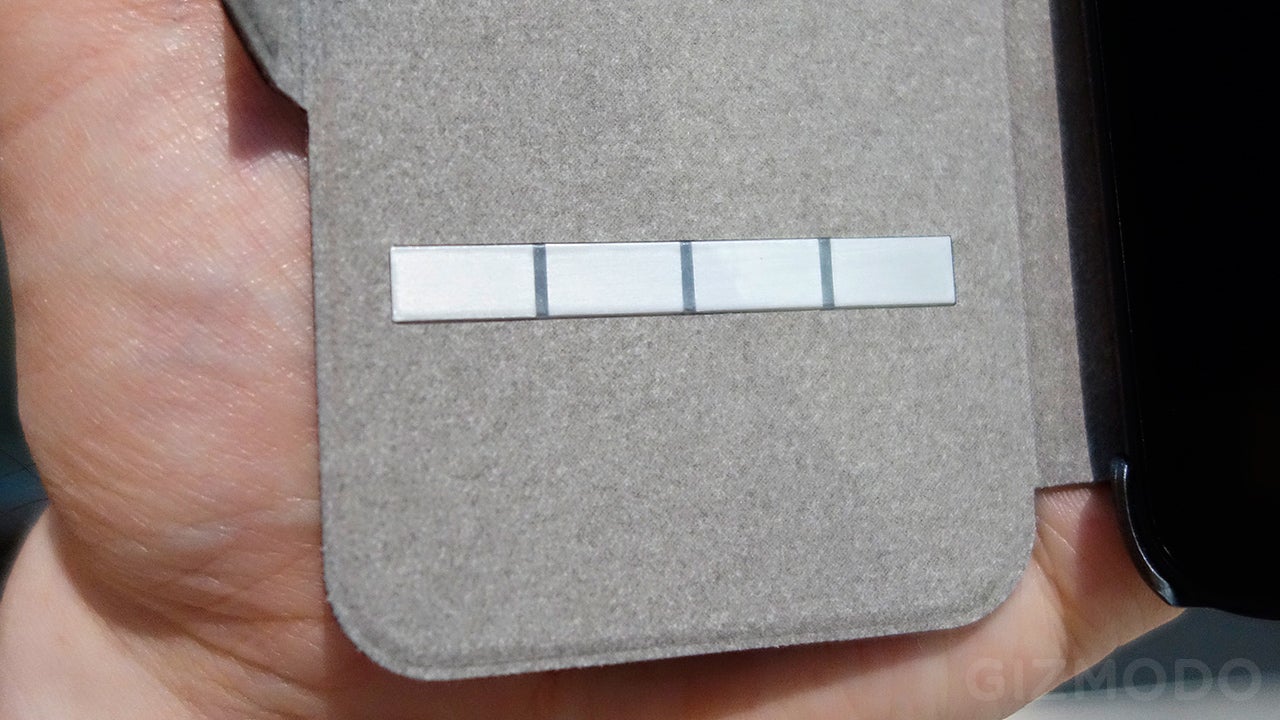 The case's leatherette cover is lined on the inside with a suede-like material to protect your iPhone's screen from scratches, but like the rest of the case it feels pretty artificial. If you enjoy wrapping your device in fine leathers and other premium materials you might be turned off by the SenseCover's smooth plastic back and faux brushed metal finish. The focus here was definitely on functionality, not luxury.

However, the materials used still feel sturdy and durable, and the build quality and fit is high quality. The case certainly doesn't feel like something you'd buy at a gas station checkout. You can also buy it in a subtle "goldpagne" colour scheme that should suit both the white and gold iPhones.

The cover also features a clear plastic panel that's strategically positioned so the time and incoming call info on the lock screen are visible through it, a small cutout for the iPhone's earpierce, and a series of four thin silver dashes that give the case its special powers. 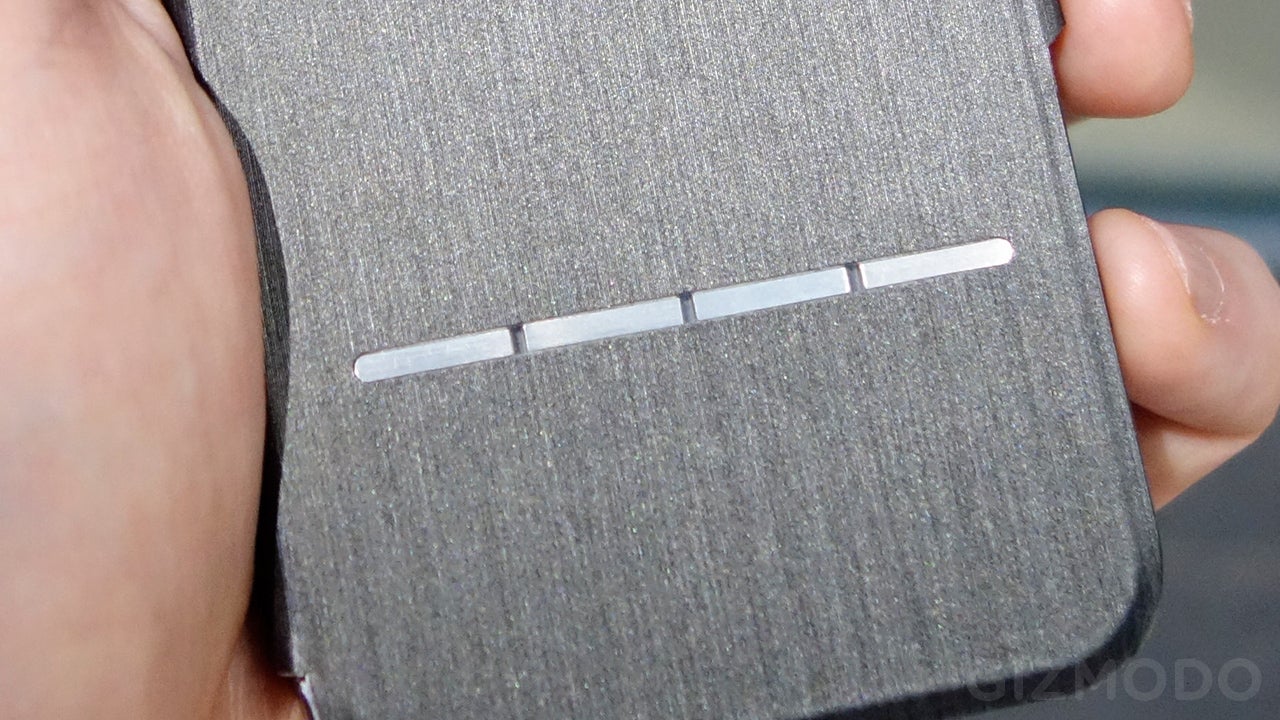 Those aforementioned silver dashes on the front of the SenseCover case are what Moshi refers to as "SensArray pads," and they conduct a charge which allows the iPhone's display to detect your finger through the cover when it's closed. When a call comes in, you can actually answer it by swiping your finger across the pads, since they line up with the on-screen 'slide to answer' bar.

It's a simple mechanism that works very well. At no point did the SensArray pads fail to detect my finger motions. The display detects your simple left to right gestures as reliably as if you were touching its actual glass surface. 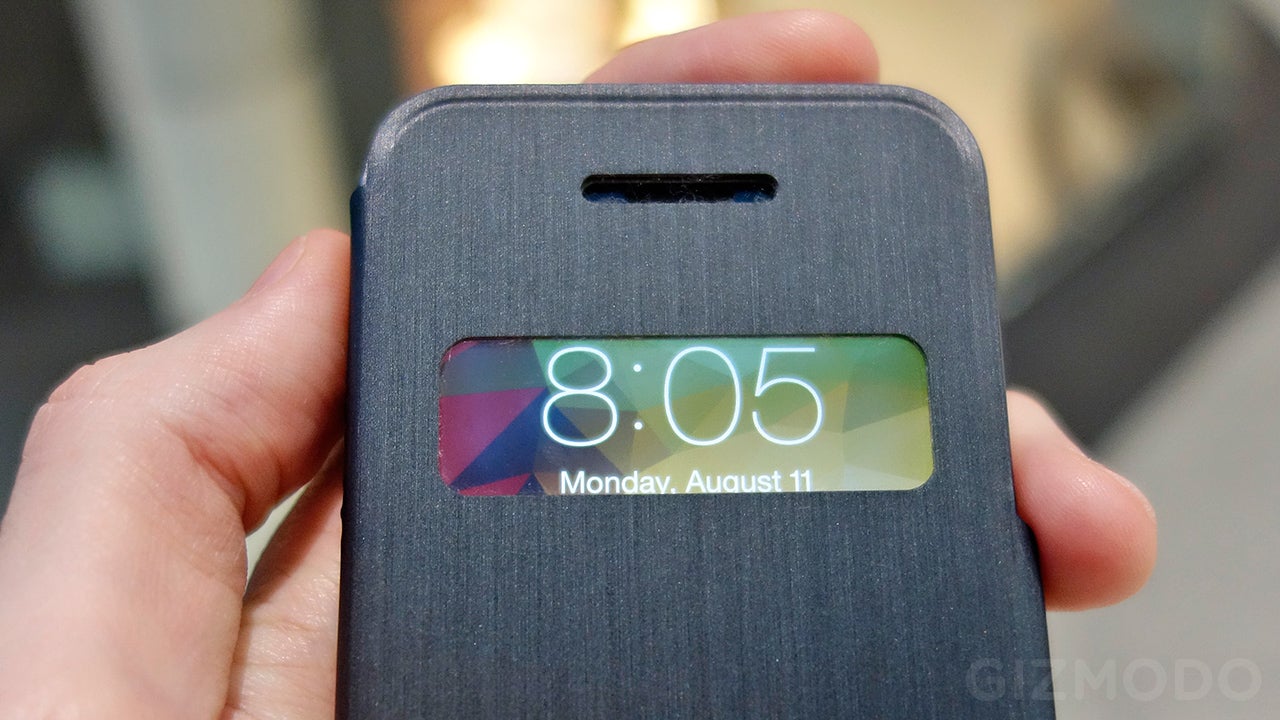 The clear plastic window on the front of the SenseCover is a handy feature in its own right. With a quick press of the iPhone's lock button you can check the date and time, screen incoming calls, and even see the name of what track is currently playing at a glance, without having to open the cover. There were times when I expected to be able to interact with the iPhone's touchscreen through this plastic window as I could with the SensArray pads — such as skipping tracks using the on-screen controls — but that's unfortunately not part of the deal. Still, it's surprisingly useful.

Many iPhone users who reject cases claim it's because they will add too much bulk to their sleek device. But the SenseCover case manages to keep your iPhone slim and easy to slip into a pants pocket — without worrying whether it will get scratched up by keys and coins.

The added functionality of being able to peek at the iPhone's lock screen and answer a call with the cover closed is minimal, but it manages to rise above just being a novelty. For those who prefer their device, including its display, to be protected in a case at all times, the SenseCover makes that less of a pain. It's particularly less annoying than your standard book-style case, since the cover isn't flapping about, hanging free while you hold the iPhone to the side of your head.

The SenseCover might not add much bulk to your iPhone, but that also means it's not exactly like putting your device into a bulletproof suit of armour. If protection is your number one priority there are certainly better options out there, particularly cases made with soft shock-absorbing rubber that will better protect your investment during a fall. The SenseCover will keep cosmetic damages at bay, but we're not talking Tonka-tough here.

The specific position of the SensArray pads also means that if Apple decides to radically modify the iPhone lockscreen's UI elements in iOS 8, and reposition the answer slider for a call, or even where the time and caller ID is displayed, the case could become considerably less functional.

If you're an iPhone 5 or 5S user in search of a book-style case, Moshi's SenseCover actually does a lot of things very well. It offers a decent amount of protection — at least compared to a naked iPhone — with minimal added bulk, a flip-style cover that stays closed with a magnetic flap, and the added functionality of being able to glance at important on-screen info while your iPhone is locked. The SensArray pads might seem like a novelty, but they work well and being able to answer an incoming call with the case's cover closed is surprisingly useful.

If screen protection isn't as important as talk time, a protective case with a built-in battery might be a better way to spend your money — just know you'll be shelling out more than $US45.

The Moshi SenseCover is also not going to turn your iPhone into a tank. The SenseCover is probably best suited for iPhone users who are already pretty careful when it comes to handling their devices, but want a little extra protection just in case. [Moshi]