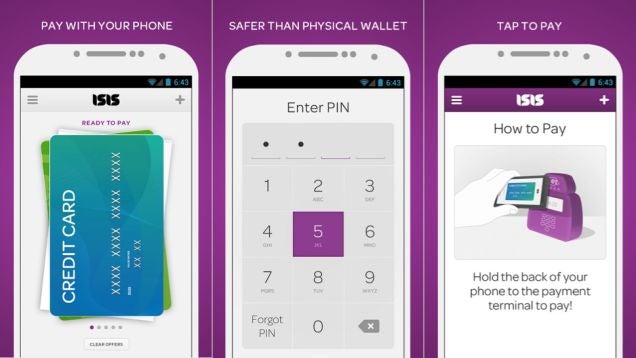 Isis is now Softcard, but it's probably not the Isis you're thinking about. The militant Iraq-based Islamic extremist group is still ISIS.

In 2010, AT&T, T-Mobile USA and Verizon joined forces to create Isis, a group devoted to popularising mobile payments through an e-wallet service. Since then, the mobile payments Isis has been overshadowed in the news by the other ISIS, notorious for horrible actions like violently murdering US journalists and mass executing Iraqi soldiers.

To combat the PR problems associated with sharing a name with a dangerous, reviled terrorist organisation, Isis-the-mobile-payments-consortium changed its name to Softcard today.

"However coincidental, we have no desire to share a name with this group and our hearts go out to those affected by this violence," CEO Michael Abbott wrote in a blog post. The app will upgrade to its Softcard branding next week, and won't stop working.

Abbott didn't say how the group settled upon the name Softcard after this fiasco and whether they consulted someone who could tell them the probability of their new name being adopted by a group of killers. The inclusion of "soft" was probably not accidental, though I would have gone with BabyAngelLovesUSACard just to be safe. [New York Times]