Inside The Fantastic World Of Disney's Most Famous Art Director 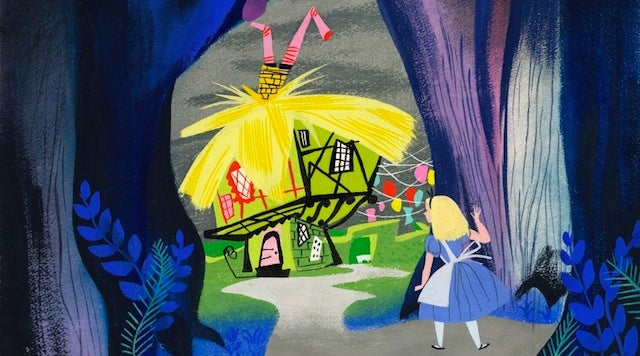 Walt Disney, for all his vision, was not an artist at heart; he was smart enough to surround himself with talented people. The look that we associate with Disney art came largely from one woman he hired: Mary Blair, the designer and illustrator behind animated films like Alice in Wonderland and the ride it's a small world.

An exhibition about Blair closes this weekend at the Walt Disney Family Museum in San Francisco, but for those of us who can't make it to the Bay Area, a new book created for the show offers the most comprehensive survey of Blair's work. (And that's saying a lot, considering that there's another Mary Blair book, by the same author, John Canemaker, that's available in both regular and enhanced versions.)

This newest catalogue is a bookshelf must-add for fans of Disney, but for me it also pieced together the fascinating art and design career of someone responsible for creating so many of my own childhood memories — and who just happened to be a woman at a time when women were not necessarily welcomed in the animation industry. 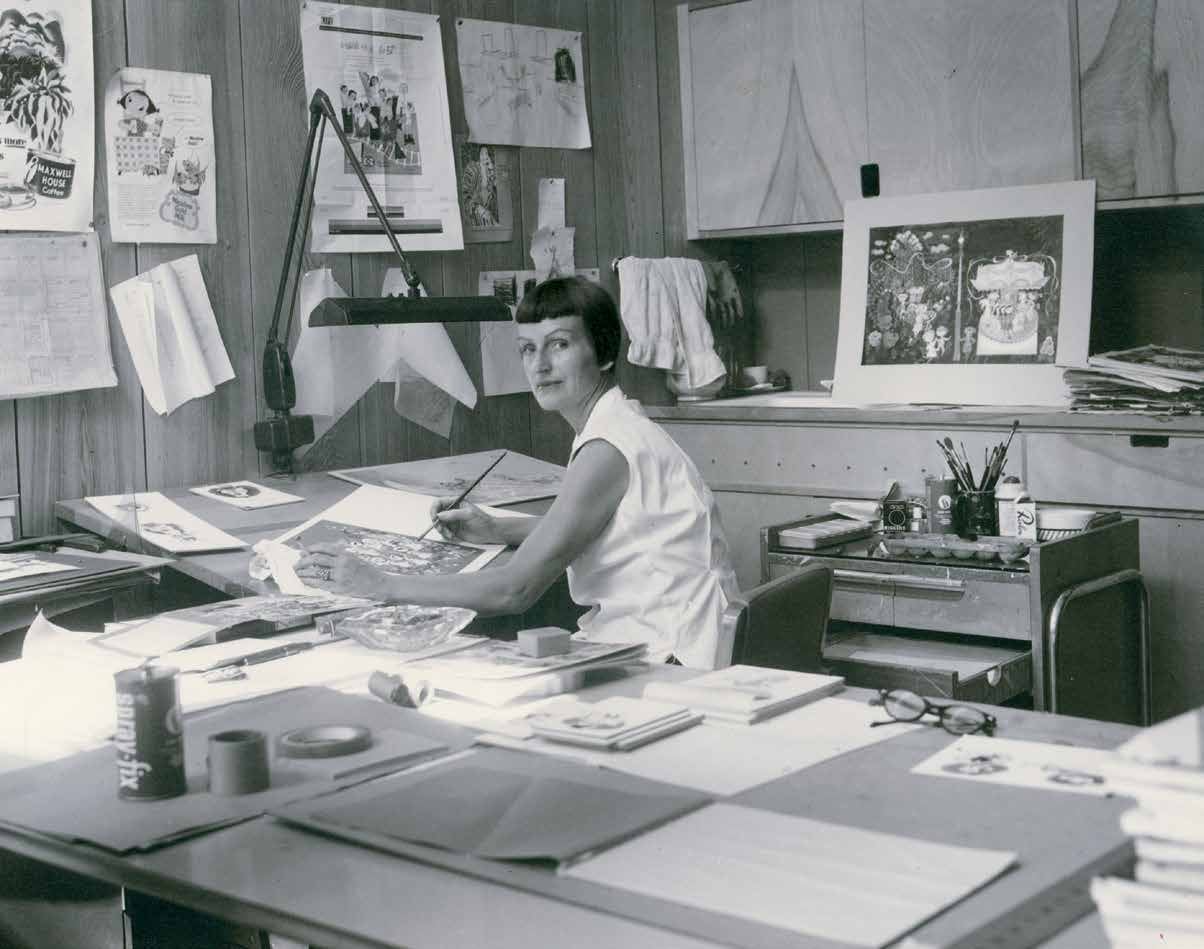 Originally trained as a watercolorist at LA's Chouinard School of Art, Blair began supplementing her income as a fine artist by working at animation studios. In 1940 she (somewhat reluctantly) joined the Walt Disney Studios, alongside her husband who was also an artist, Lee Blair.

Although she worked on concept art for films like Dumbo, The Lady and the Tramp, and Fantasia (she created a segment that was never produced), she truly caught Walt Disney's eye when she traveled throughout Mexico and South America on a trip sponsored by FDR's Good Neighbour program, gathering visual inspiration for the films Saludos Amigos and The Three Caballeros. 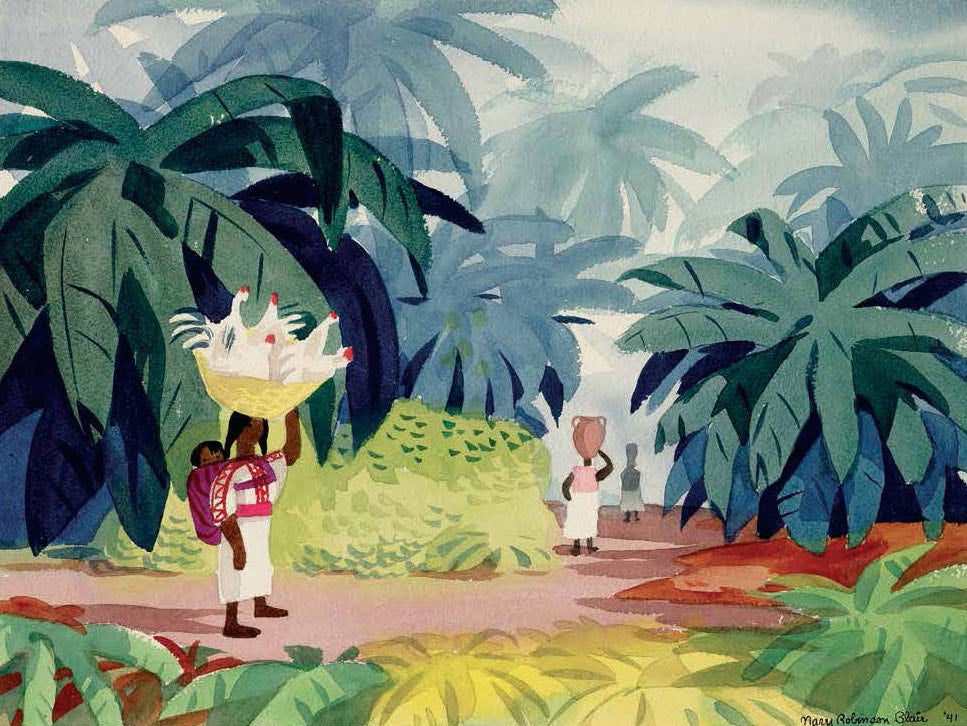 Disney was so impressed with her work that he later had several portraits she made of Peruvian children framed for his home, something he apparently never did with his artists. This affection would only grow: In the following years, Blair became so highly respected by Disney that he quickly brought her on as concept artist for a string of very famous films including Cinderella, Song of the South, Alice in Wonderland, and Peter Pan. And many, many more. 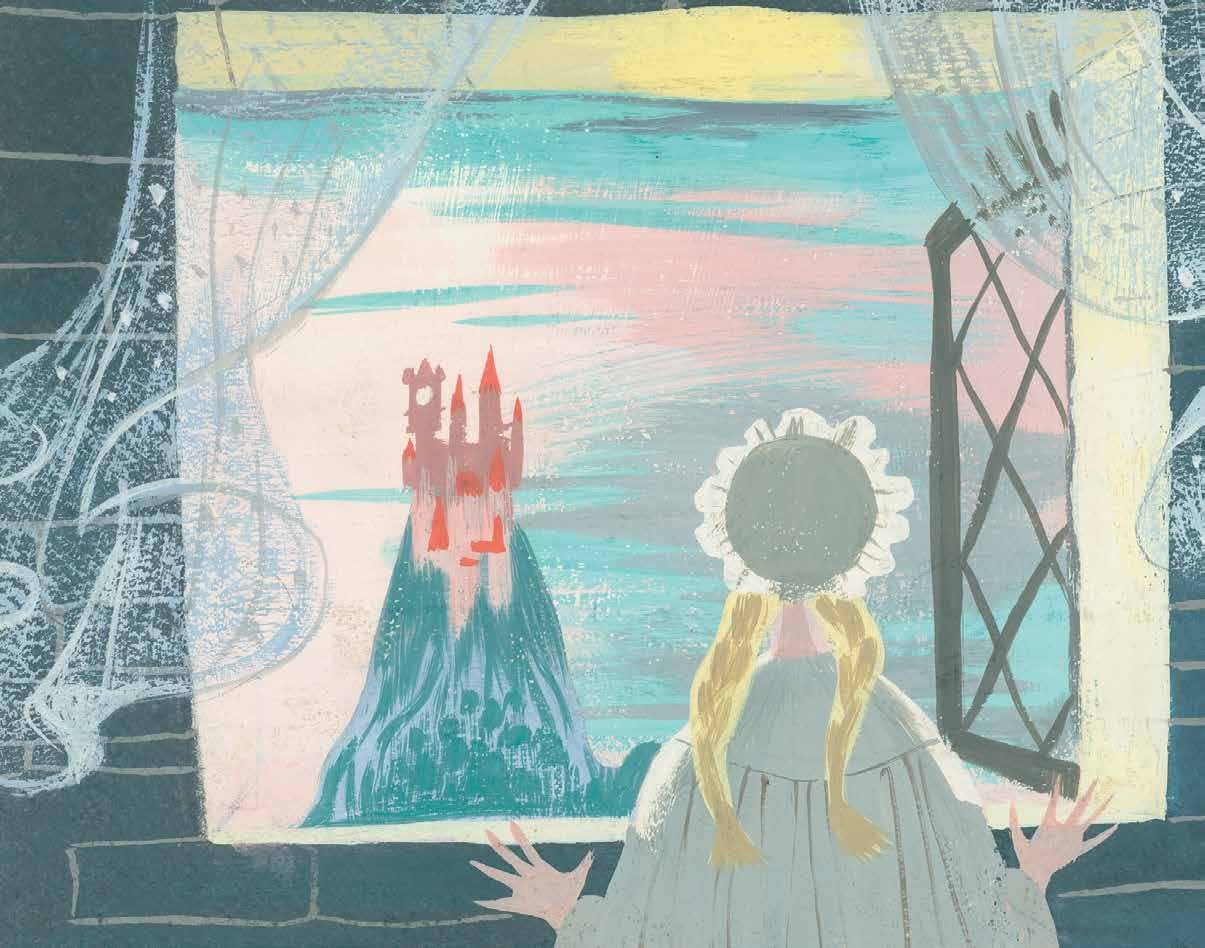 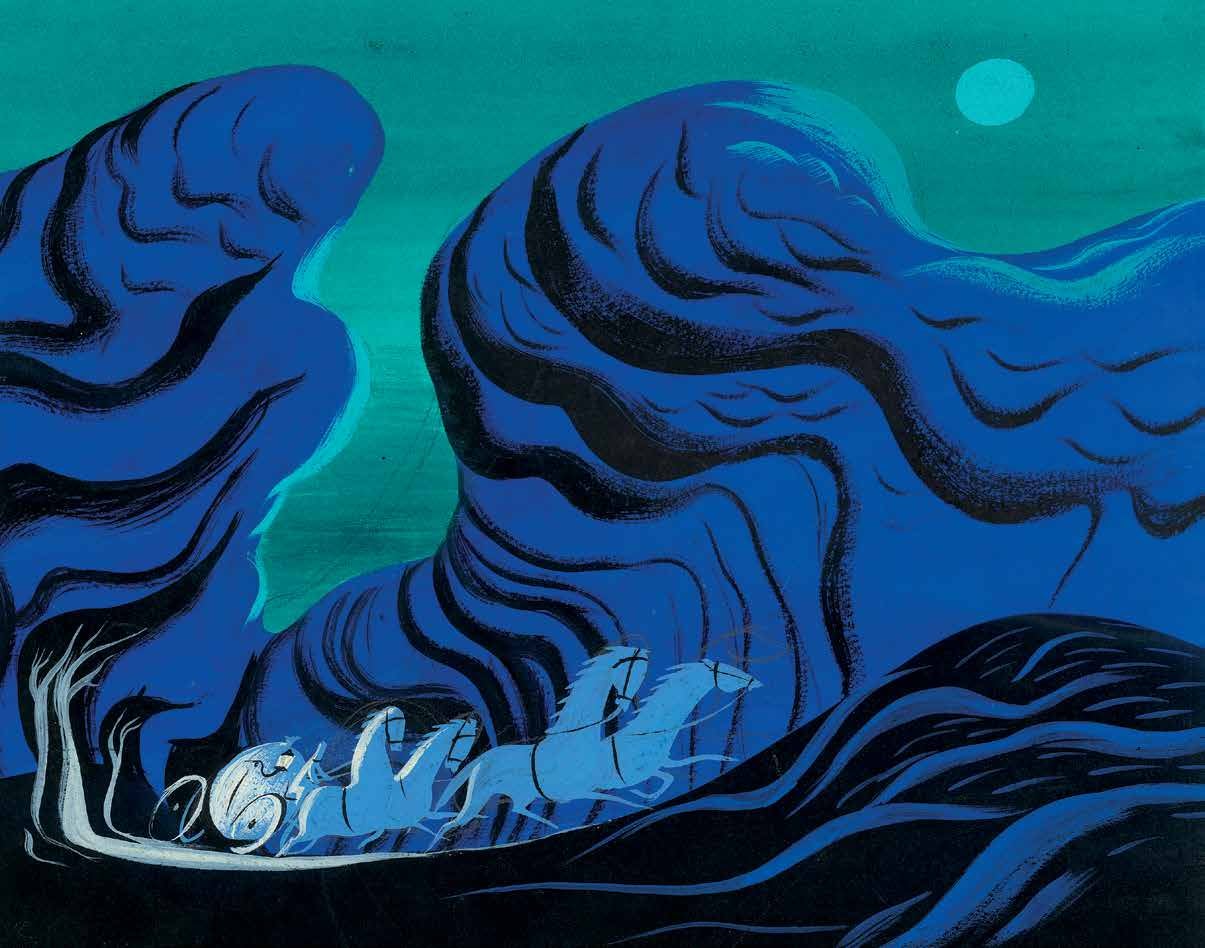 It's easy to tell now which films were touched by Blair's hand: Her skillful take on modernism introduced a completely different style of illustration to Disney's animation. Blair's graphic approach brought a level of sophistication to the concept art which is reflected in her dazzling patterns and choices of rich colours. 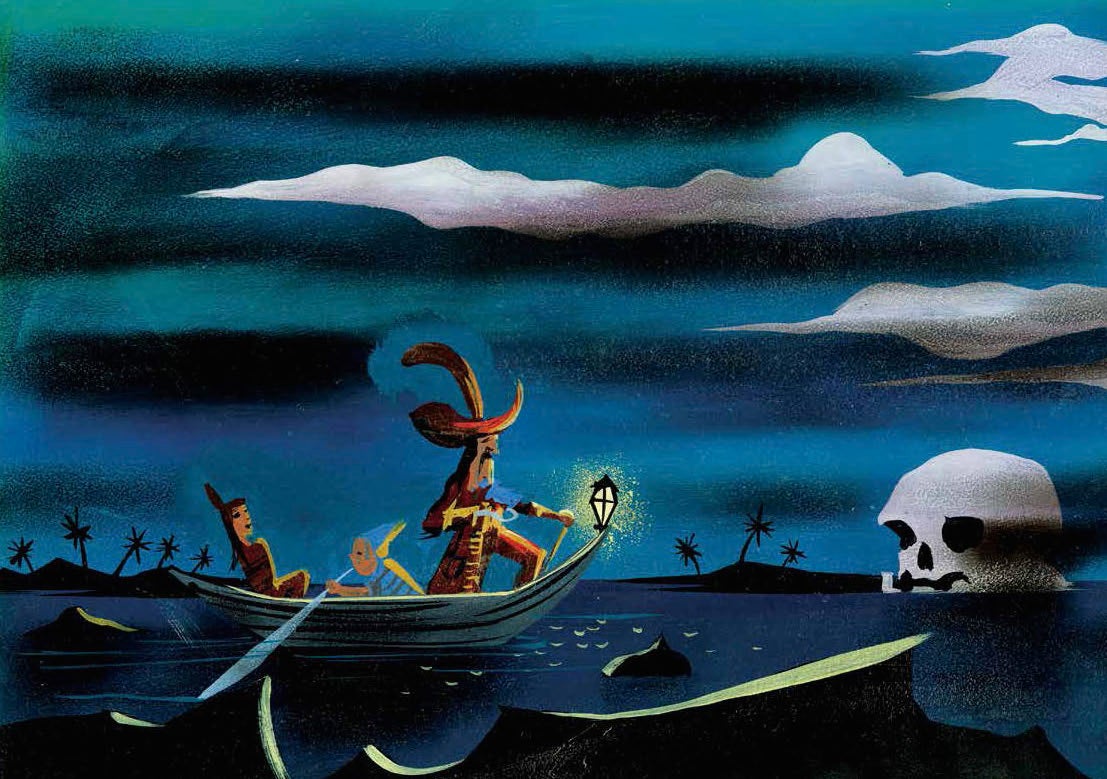 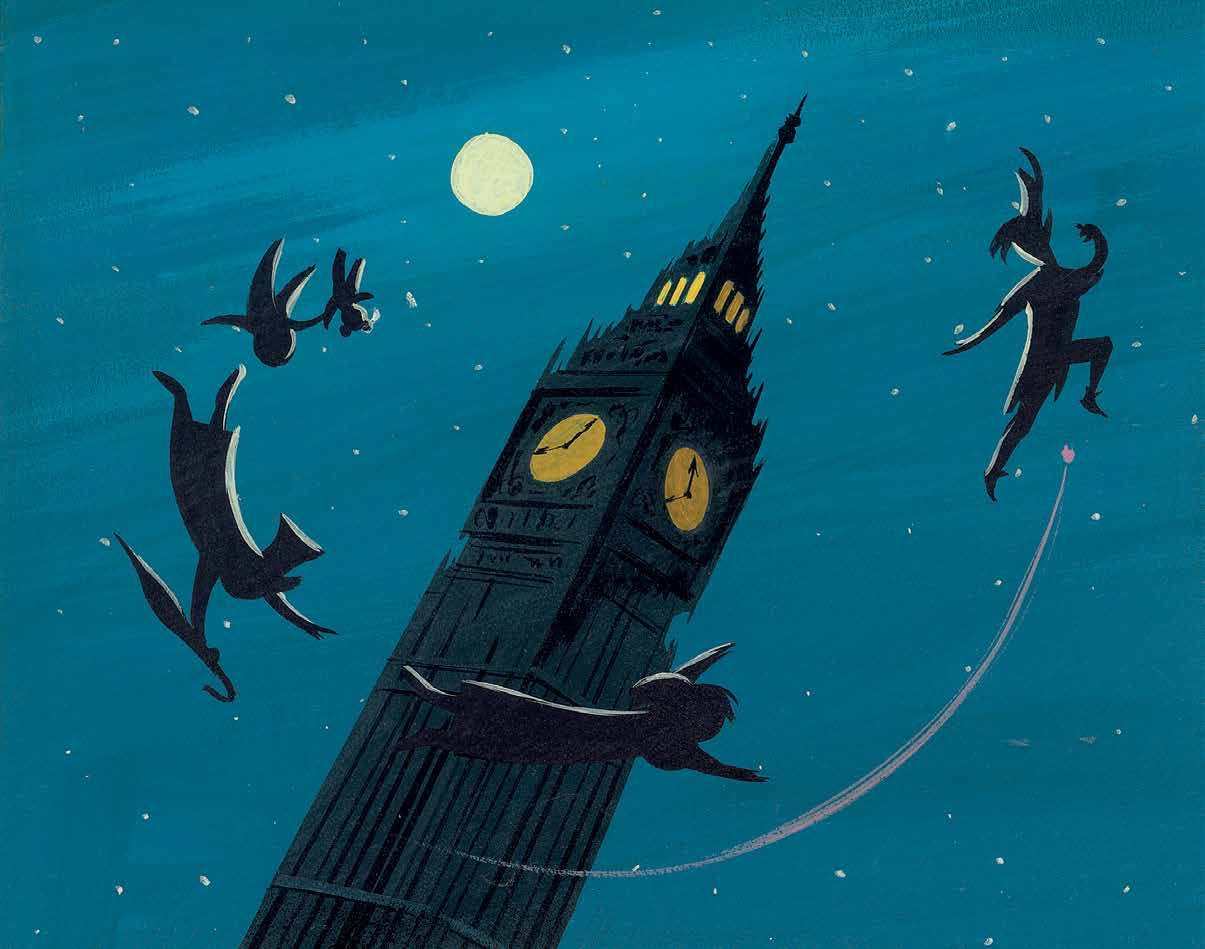 However, it's rare to see an exact translation from her concept work to the way the films actually looked when inked and animated — something which apparently frustrated Disney. It's most easily seen in small details like the Victorian ball gowns in Cinderella or London's spot-on architecture in Peter Pan: There's an attention paid to design history and formal accuracy that you just don't see in other animated films of the time. Yet the characters themselves — those exaggeratedly wide-eyed Disney princesses — appeared overly childish and cartoonish when standing before Blair's elegant backgrounds. 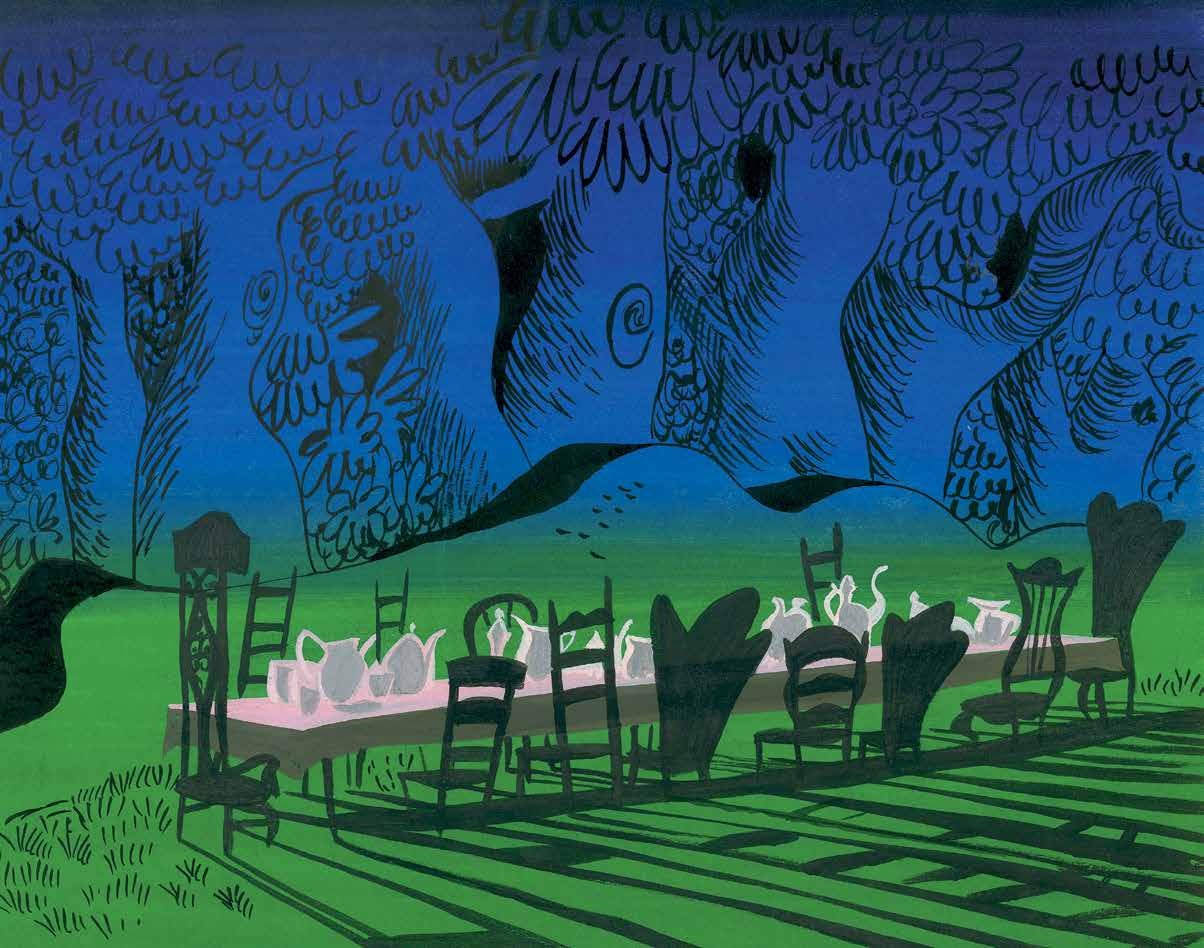 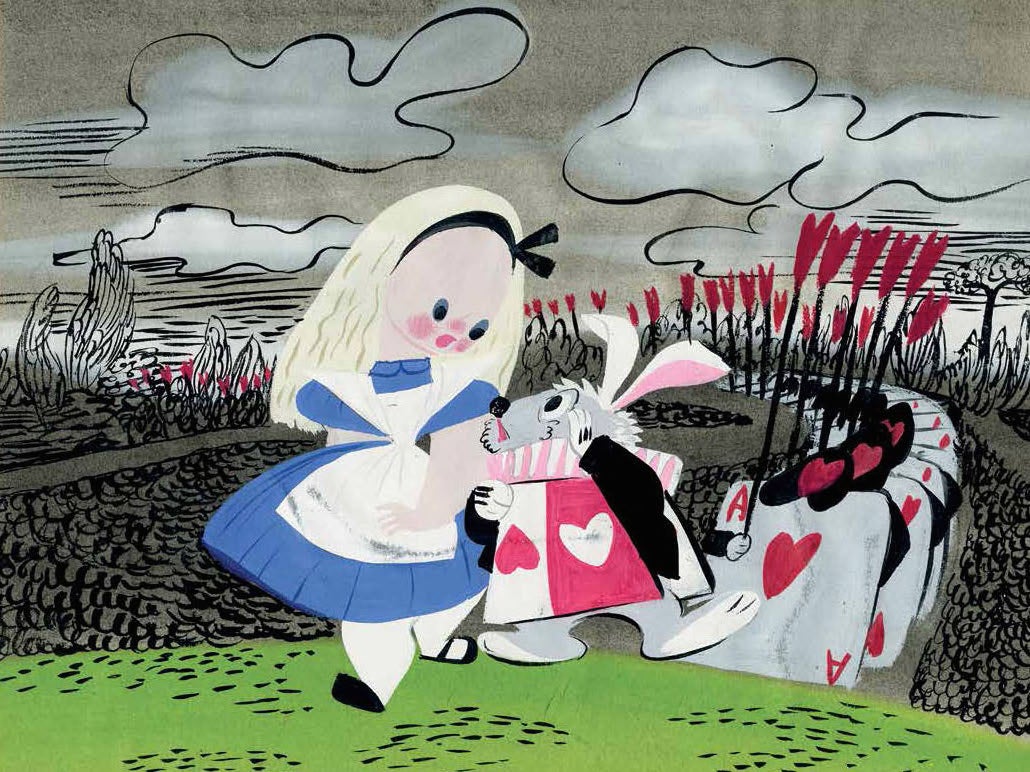 Visual development for Alice in Wonderland, 1951

As Blair's hand came to define Disney's early identity on film, she also helped shaped one of his most visionary projects: Disneyland. Walt Disney tapped her to design one of the most famous rides at his theme park, the around-the-globe romp it's a small world . Her work became 3D as she collaborated with engineers to build kinetic environments, essentially creating multimedia sculptures of her characters that were brought to life through early animatronic technology. 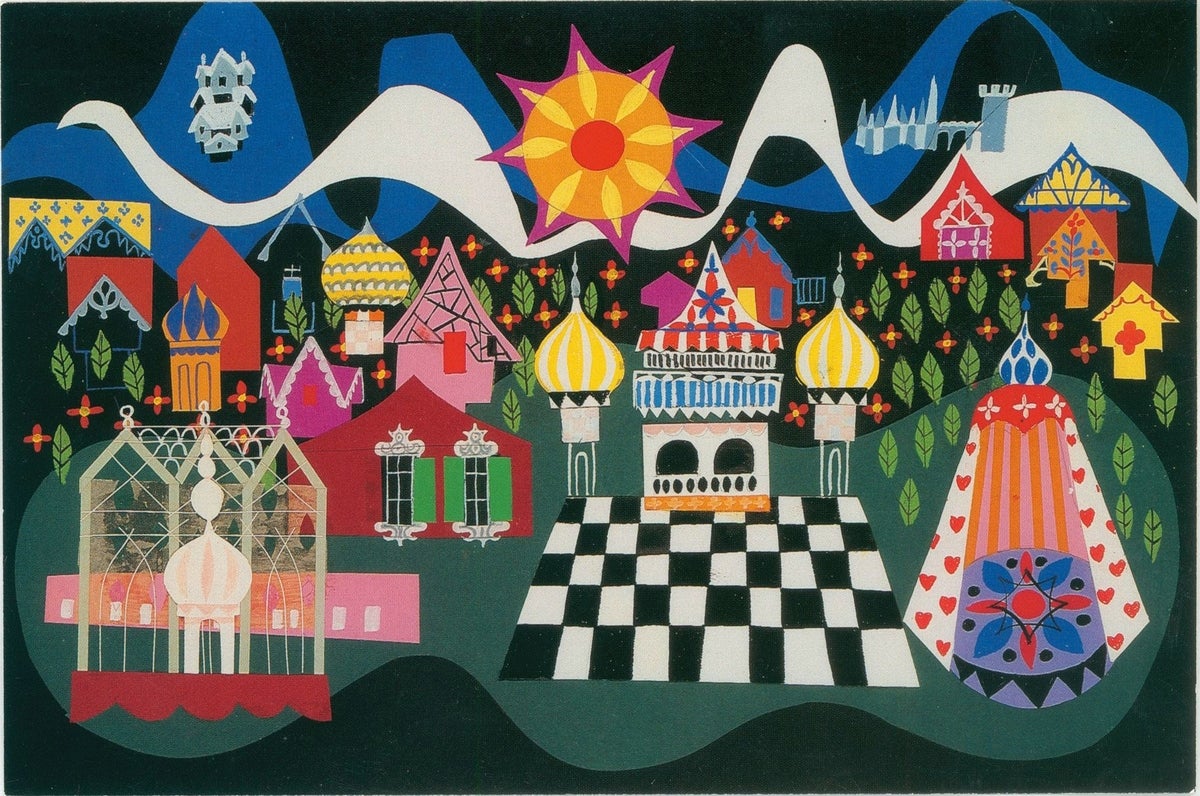 Preliminary design collage for it's a small world, 1964

Blair's work on it's a small world actually predated the opening of Disneyland, as she created the original ride for its debut at the 1964 World's Fair in Queens. When the Disneyland version opened in 1966, she was able to expand upon this universe she'd created for the Fair, gleefully adding several more countries to the mix. It's a small world would become legendary for entrancing children (and hypnotizing them with its song). But it is nuanced enough to captivate adults as well. When I visit Disneyland I might ride it several times, just to soak up all the textural details and witty takes on cultural diversity (some of which are very stereotypical and borderline offensive by today's standards — and have been updated). It was largely regarded as her greatest work. 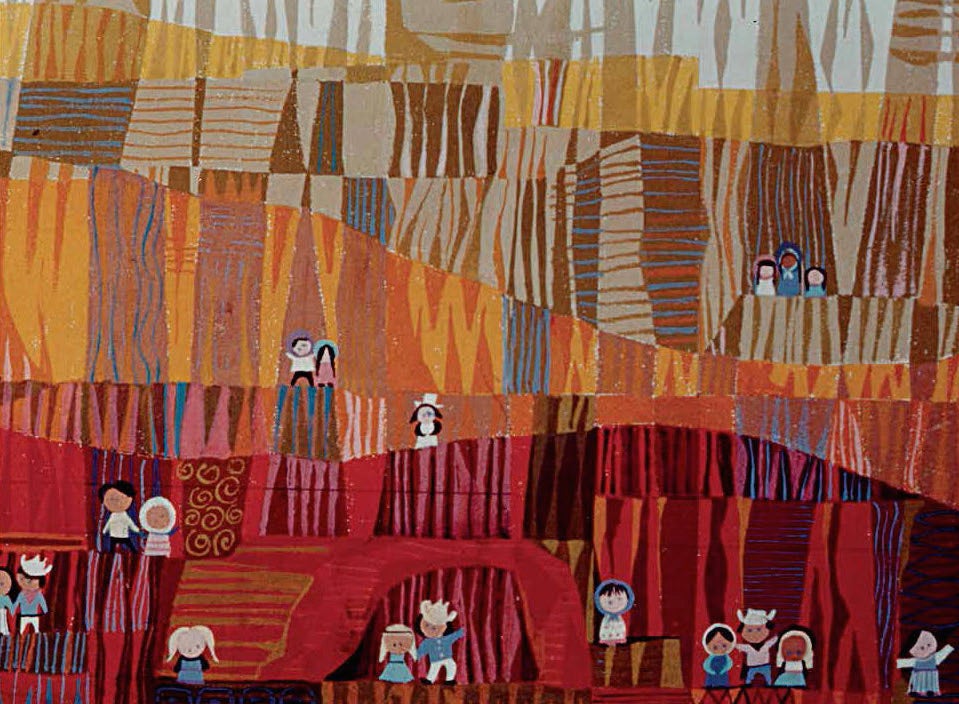 Detail of the mosaic mural at the Contemporary Resort, 1971

Blair contributed more to the brand-building of Disney's experiences. She also designed graphic panels for Tomorrowland and a large ceramic mural for the Contemporary Resort at Walt Disney World, a dramatic mosaic that climbs 90 feet up through the cavernous hotel atrium that has a monorail running through it. 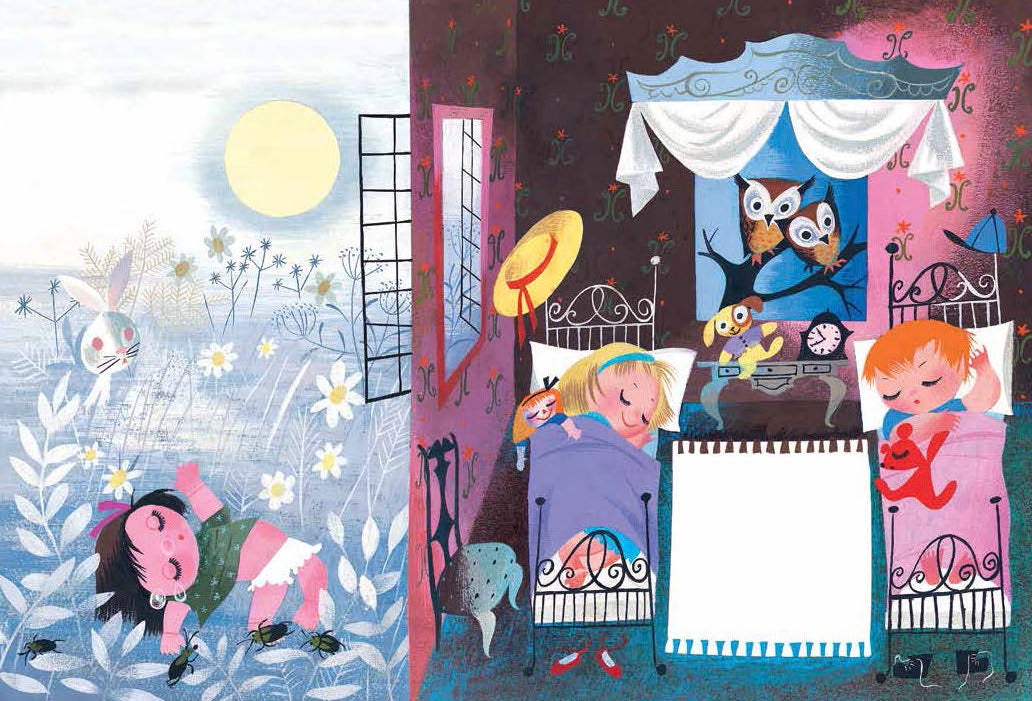 Art for The Golden Book of Little Verses, 1953

Blair worked on and off with Disney throughout the years, but when she finally departed Walt Disney Studios, she became a highly respected illustrator and art director in New York City. Her work encompassed ads, window displays, greeting cards, editorial illustrations, and children's books, namely Golden Books, where her style found its way into my childhood once again. Most kids grew up learning their ABCs and fairy tales alongside Blair's illustrations.

Her greatest champion, Walt Disney, died in 1966, and with him, the book argues, perhaps many of Blair's greatest unrealized opportunities. Blair went on to have an incredibly rich career outside of Disney's walls, and although she herself died in 1978 at the relatively young age of 66, it was only truly during this period when she began to come into her own. Those Golden Books, for example, gave Blair the ability to build and execute an entire graphic language, much like it's a small world afforded her complete creative freedom. I can only imagine what might have transpired if she was given the full budget of a Disney film and left to her own devices.

Yet her legacy lives on. You can catch her influence in the detailed Agrabah minarets of Aladdin. The rigour of the staunchly modernist home of The Incredibles. Maybe even in a twirl of Elsa's dress in Frozen. I can still see a little of Blair's world in every Disney film. [Walt Disney Family Museum]