A "mid tier hero", if such a phone can exist, HTC's Desire 820 is an intriguing device. Despite being directed at the less-expensive mid-range end of the market, it's the world's first to sport Qualcomm's powerful new 64-bit, 1.5GHz quad core Snapdragon 615 processor.

Whether or not Android devices need a 64-bit chip is up for debate, but it's at least future proofing the Desire 820 for whatever the Android L update will bring, and should improve battery performance thanks to better power management.

For a mid-range device then, this is an attractive, reasonably-well spec'd phone. With a 5.5-inch 720p screen, it's running Android 4.4 with the full raft of HTC Sense 6 UI features laid on top. This includes the BlinkFeed news aggregator, and also some quirky camera features, including a "Face Fusion" face morphing trick, real-time through-the-viewfinder "beautification" for portraits and a photo-booth like image collaging app.

Despite the new software camera trickery, it's not making use of the HTC One M8's impressive Duo Camera tech though. While selfie shooters will be pleased to find an 8MP shooter up front, there's "only" a standard 13MP low-light f2.2 sensor around the rear, lacking the Duo Camera's depth-tweaking abilities. 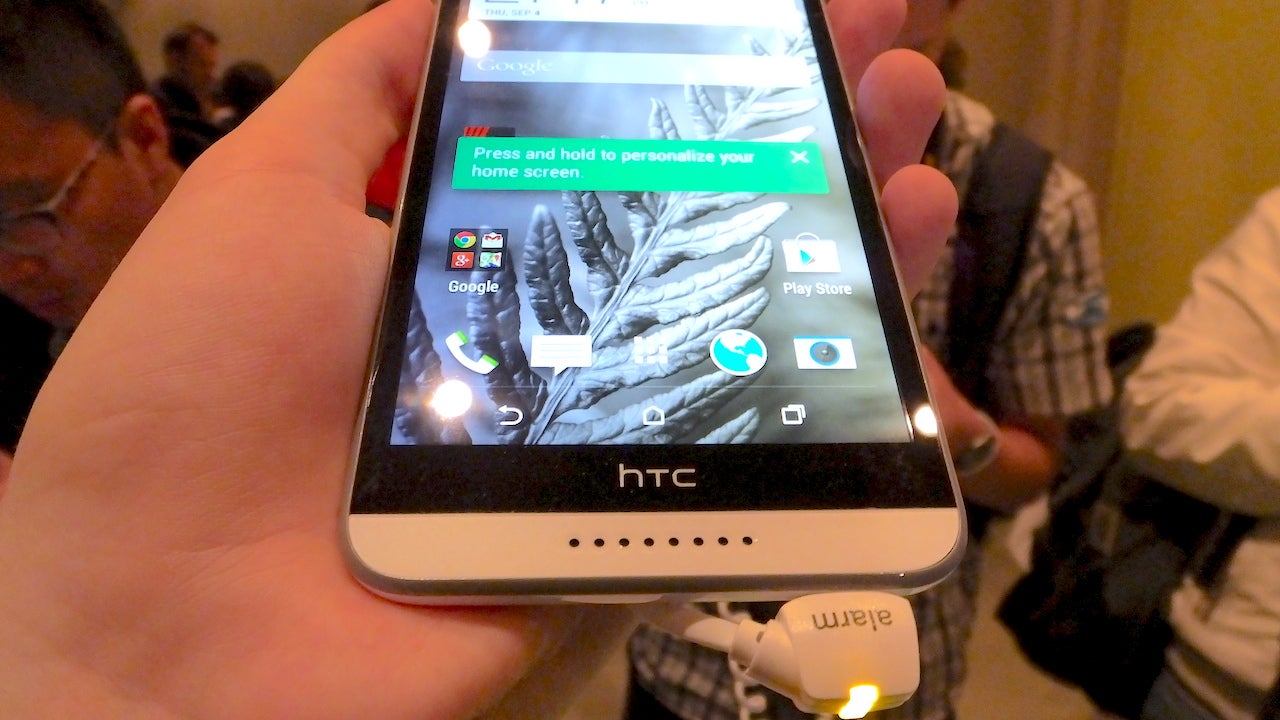 Despite being made of plastics, HTC has aimed for a sturdy unibody build, with a two-tone, moulded "Double Shot" design that sees the two differing coloured plastics poured and set in one mould. There's no creak to the chassis, though the single-button strip volume rocker felt a little loose in the handset I briefly played with.

7.74mm thick and weighing 155g, HTC's impressive front-facing, stereo BoomSound speakers are again included, which is great for back-of-the-bus tune bangers. 16GB of storage (with support for 128GB microSD expansion), 2GB of RAM and a 2600 mAh battery round off the spec sheet.

The Desire 820 will also be getting the touch-sensitive Dot View cases that first launched alongside the HTC One M8.

Shipping in September, HTC's yet to reveal pricing, but its mid-tier placement means it shouldn't be breaking the bank when it hits stores.