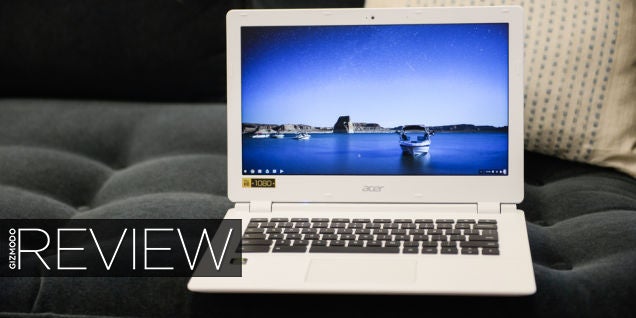 Nvidia's Tegra K1 is an absolute blast in an Android tablet, and now the Acer Chromebook 13 is slapping it in a laptop body too. The result isn't perfect, but it's a promising look at where Chromebooks could go.

A Chromebook with Nvidia's impressive K1 mobile chip for a brain. A $US380 laptop with a 1080p screen that can handle eight hours of pretty heavy use on a single charge. A Chrome OS machine that stands a chance at maybe behind able to handle 3D games. But not the most powerful machine ever because, of course, it is a Chromebook after all. Chromebook-land is exploding with variety. Aside from the ludicrous Pixel, Chromebooks started as a bunch of super mobile laptops with low resolutions and generally mediocre guts. Now, we're seeing more and more options with big, beautiful screens and more powerful desktop-grade internals.

The Acer Chromebook 13 is right in the middle of the fray, with a(n optional) 1080p screen and a processor that has its heart set on blurring the line between mobile and desktop. Maybe, just maybe, the Chromebook 13 is in a position to be the best of both worlds.

Acer's Chromebook 13 is white and blocky, with a smooth matte finish on the top of the lid, and a rougher one on its underbelly. The style didn't do much for me at first, but over the course of a week or so I really came to dig it; I'm a sucker for minimalism and the Chromebook 13's design is spartan in a way that's refreshingly deliberate. The same stark, white, and angled look caries to the inside where black keys and a few stickers (and the screen, duh) are the only thing to disrupt the same matte field of white you'll find on the lid.

Speaking of that 1080p screen, it's relatively high resolution for a Chromebook (though screens like this are becoming more common) but it also has a matte finish that holds up glare-free in direct sunlight but that really knocks the display down a few pegs in terms of looks. You can see a little matrix of squares around the pixels — you don't even have to look especially closely — and it gives the display the unpleasant effect of looking like it's covered with a thin film of soap. Especially when you're looking at something white. It's hard on the eyes.

The full-sized keyboard is a little bit squishy, but the frame around the keys is remarkably solid; there's a little flex to be found on either side of the keyboard, but it only shows up if you're poking around and actively looking for it. The hinge is nice and solid too. The screen doesn't bob around (like it has a tendency to do on the HP Chromebook 11) unless you are REALLY HAMMERING AWAY AT THAT KEYBOARD. The keys themselves have a lot of height to them, and that height (and the full-size) makes touch-typing on the Chromebook 13 pretty easy; I've hammered out this whole review on it and have few complaints.

Likewise, the trackpad is totally workable, if also nothing to write home about. When I initially got a hands-on with the Chromebook 13, the unit had an issue where the trackpad would fail to click if my hands were resting too heavily to either side of it, but thankfully I had no clicking problems with the trackpad on our review unit.

Port-wise you can find a USB port and SD card slot on the left side, a power socket and a headphone jack on the right, and a second USB and an HDMI connector on the back, in case you want to plug into a TV or a bigger monitor. The rear placement is a little unusual for a laptop, but I didn't find it to be any better or worse than a more conventional side-port.

The big selling point of the Chromebook 13 isn't anything about its outsides though, it's the Nvidia Tegra K1 brain. We've seen this chip kick arse in the Shield Tablet, but powering a Chromebook is a bit of a different challenge. Mostly the K1 holds its own just fine, but it's nothing that blows away competing Chromebooks that run Intel chips or even Samsung's ARM-based Chromebook 2 in day-to-day use. Text can still take a while to show up when you're typing. Juggling more than 6 or 7 tabs will still start to make your performance get a little hitchy, though not in a way that's consistently bad; the lag comes and goes depending on how many of your tabs are trying to load at any given time. Always-updating tabs like Tweetdeck or Slack can be brutal on performance. I ultimately had to close Pandora so that typing this review out in Google Docs would be a little more pleasant.

I put the Acer Chromebook 13 up against a Samsung Chromebook 2 (with an Exynos 5 Octa-core processor), loaded each up with ten identical tabs including some Gmail, Tweetdeck, and Slack, and the two performed pretty much the same. Throw something 3D into the mix though — especially something that utilizes WebGL for rendering — and the Chromebook 13 can handle it remarkably better. BioDigital's impressive spinning human bodies work wonderfully (once they load), where on the Chromebook 2 (and even an Intel Celeron-powered Toshiba Chromebook), there was a lot more hitching going on. The Chromebook 13 also handles full 1080p streaming video admirably, so long as there's not too much going on in the background.

The Chromebook 13's graphical prowess is limited to a few specific uses right now though, specifically web applications that use WebGL — a smallish, but growing collection of gimmicky websites and tech-demo-ish games, with the occasional useful tool thrown in for good measure. But try running Bastion or From Dust, or any other "Native Client" app from the Chrome Store, and you're totally out of luck. Those games notoriously bring Intel-powered Chromebooks to their knees, but on the Chromebook 13 they don't even run, thanks to some outdated APIs and developers who haven't gone back to tweak their apps to play nice with ARM chips.

It's not a dealbreaker — newer apps don't have this problem, and devs can always go back an update — but it's a handy reminder that horsepower doesn't matter if incompatibility means you can't use it. Just like how we know the K1 can run Portal just fine, but only if it's got the right operating system; you can't do that on Chrome OS (yet).

If you're looking for an laptop that's got solid battery life, the Chromebook 13 fills the niche pretty well. The official line is a 13-hour figure (via a Google PowerLoad test), but that's specifically for the model with the 1366 x 768 screen. The model we tested had the full on 1080p, which obviously takes a bite out of battery life, but with light usage (one Chrome window, four tabs — Facebook, Tweetdeck, Gmail, and a 10-hour YouTube video playing in non-fullscreen, all at 70 per cent brightness) the Chromebook clocked in at a very respectable 8 hours. Well, just shy by 13 seconds. Under heavier use (I blogged with it for a day, so we're talking ~12 simultaneous tabs including Tweetdeck, Gmail, and a half-dozen static newspages) the Chromebook 13 gave up the ghost four minutes shy of six hours. Not a full day of work, but plenty of time to chill at a coffee shop or find an outlet to hang out by for a little bit.

The K1's performance on WebGL applications is really promising. The idea of having a laptop computer that's relatively cheap, can handle all your daily web-browsing and emailing well enough, but that won't seize up if you try to go to a webpage that has some 3D tricks up its sleeve is awesome. And while the Chromebook 13's performance on just standard web-browsing can still be a little sluggish, it almost feels like a different (better!) machine when you load up something like HexGL.

The Chromebook 13 looks really nice. It took a while to grow on me but now I really dig it. Maybe I'm just a sucker for black and white, but I can't think of a Chromebook I'd rather be seen with except maybe an HP Chromebook 11.

The battery life is solid. Eight hours of light usage is pretty good, and the lower-res model probably has some serious chops in that department. We haven't seen what the battery life on the low-res model looks like first-hand (yet), but the performance we saw on the 1080p model is promising for sure.

That matte screen. 1080p is great and all but the shoddy matte finish really kills it for me. The Samsung Chromebook 2's glossy 1080p is just so much better in almost every scenario. Yeah, the Chromebook 13 is pretty impervious to glare, but at the cost of making white-background websites and things like Google Docs unpleasant to read. It nagged at me when I was watching videos too. You can kind of tune it out, but when you notice it, it really sucks.

The K1 is good at handling WebGL stuff, but for average web-browsing and other flavours of Chrome usage it's just OK. Using the Chromebook 13 side-by-side with the Exynos 5 octa-powered Samsung Chromebook 2 and the Intel Celeron-powered Toshiba Chromebook I was able to find some instances — loading that 10th or 11th tab, for instance — where the Chromebook 13 has a little extra pep, but not enough to notice on its own. And it still falls victim to typical Chromebook pitfalls like the old "I have typed three words but they have not shown up. Are they going to show up? Wait, oh there they are."

Probably not. The Acer Chromebook 13 shows the K1 has promise as a Chromebook brain, but the Chromebook 13's screen is really disappointing, and K1 could very well show up in a machine with a better one. In the meantime, the potential of K1 is not a big enough draw to pick the Chromebook 13 over something like the slightly more expensive Samsung Chromebook 2, which has a screen that looks great and won't grate on you. Or something cheaper with a lower-res screen if the display doesn't matter that much to you.

Yet. K1 has a ton of potential in Chromebooks and other web-browsery devices. WebGL — what the K1 and the Chromebook 13 excels at — is only going to become more prevalent. It's supported by all the major browsers, and is poised to drive more and more of the interactive web as time goes on. Not to mention that when Google gets around to porting Android apps over to Chrome, the K1 will regain some of the superpowers it showed off with the Shield Tab.

For the time being, K1 seems like a pretty good bet for a Chromebook brain, but the Chromebook 13 isn't quite the body it'd be best in. The $US280 base model (with a 1366 x 768 screen, 2GB of RAM and 16GB of storage) might be a good buy based on K1 graphics power and battery life alone, but we can't really speak to what that one's really like to use. The $US380, 1080p model we did test (4GB RAM, 16GB storage) deserves a better screen for the price. Here's hoping it gets one soon.