Doubling Up LCDs In VR Headsets Can Quadruple Their Pixel Density 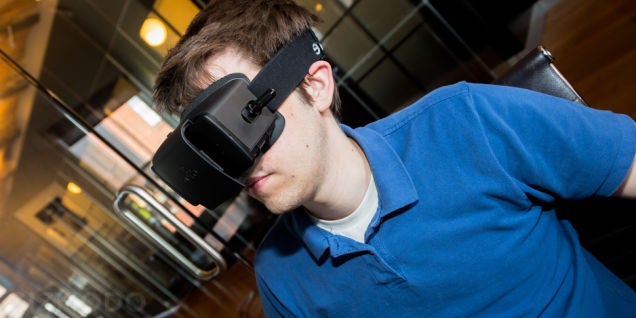 Donning a VR headset can be a wonderfully immersive experience, if you can look past the pixels. But new research by Nvidia suggests that merely stacking two LCD systems in front of your eyes can quadruple their pixel density. That could make Oculus Rift — and, more importantly, its cheaper DIY competitors — way more immersive.

The problem with VR headsets is that your eyes are terribly close to the screen, and even the best smartphone displays don't pack pixels closely enough for them to seem invisible at that range. Instead, reports Technology Review, Nvidia has decided to exploit the fact that LCD panels use an array of tiny shutters to control the visibility of individual pixels, in order to up resolution. Adding an extra array of shutters over a full LCD panel of the same design, but just fractionally offset compared to the one below, allows the researchers to divide the pixels of the base display into four smaller areas. Those are the new four pixels, where previously there existed just one, and the result is what's known as a cascaded display. You can see how it works in the video below.

The downside: brightness is decreased, because the light has to pass through more components to reach your eye. The massive upshot: the pixel density quadruples, and the brightness is less of an issue in a VR headset anyway. There is, of course, the matter of making sure that the images looks right — opening and closing two levels of shutters can do strange things to brightness across the display — but Nvidia has developed some maths to translate normal video feeds for the hardware, and is even trying to squeeze higher frames rates out of the technology too.

Of course, this a fairly decadent advance in what remains a niche sector, at least for now. But it also paves the way for truly convincing immersive VR. And that is something to get really excited about. [Technology Review]