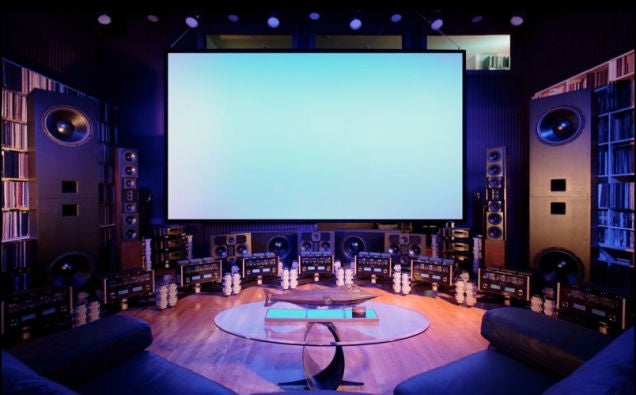 More than two years ago, Dolby trotted out Atmos, the most advanced surround sound system in history. It's been used to bring explosions and battles to deafening life in everything from Gravity to The Hobbit. It's available in hundreds of theatres, and now Dolby plans to bring Atmos to your house.

The system supports up to 128 speakers and 64 discreet speaker feeds, including speakers above you. Consider that in the past most theatres have only been outfitted with 5.1 channel systems, which means left, right, centre, left side surround, right side surround and a subwoofer. So Atmos open a whole new world of sonic possibilities to sound designers, and they have taken advantage of it on loads of films. If you've heard the tech in action, you know it's powerful, adding to the illusory adventure of heading to the cinema.

Bringing that tech into the living room is more complicated than the surround sound of yore. Simulating a 5.1 system is easy enough if you've got the space; you just need five speakers, a sub and hardware capable of decoding the Dolby package. But for most people. putting speakers in the ceiling isn't a possibility.

As with many audio technologies, bringing Dolby Atmos to the home will involve the science of tricking you brain. Though Dolby's blog post announcing the initiative doesn't provide a lot of details, it does mention a "Dolby Atmos module" to be placed on top of your current speakers at home. The first partner to announce they will support Dolby Atmos is Pioneer. The company's excellent Elite series speakers and receivers will support Atmos through a firmware upgrade by the end of the year. Luckily, it appears your existing Blu-ray player will be able to read the Atmos audio feed, so you won't need to run out and get a new one.

We'll definitely have to wait and see how this all works when partners start releasing devices, but Dolby's tech is nearly always on point. Atmos was the best thing to happen to going to the movies in a long time. Maybe it will be the next big thing to happen to watching flicks on the couch now too. [Dolby]