North Korea is a weird place. It sounds a little insensitive to put it in such stark terms, but the arrival of the new North Korea Travel app — the first of its kind — offers a unique new perspective on the isolated country. The app is exactly what it sounds like: a travel guide that “allows users to explore the world’s most secretive nation at home, work, or on the go.” Sounds like fun, right?


The app ($1.29) itself seems just as mysterious as the destination. While it was developed with a tour guide with a decade’s worth of experience travelling in North Korea, most of the attractions and even the cities seem totally foreign to the average American. After all, for most of the past 50 years, the country’s been off limits to most of the Western world. So how would we know which is the best restaurant in Pyongyang or if restaurants even exist in Pyongyang? (Spoiler: They do.)

But times have changed. Nowadays — and in spite of the State Department’s warnings not to — you can go to North Korea on a guided tour. Based on the number of Americans held prisoner in North Korea in the past few years, you should definitely be careful. You should also bear in mind the fact that North Korea called the U.S. “a living hell,” so don’t expect the locals to be too friendly. 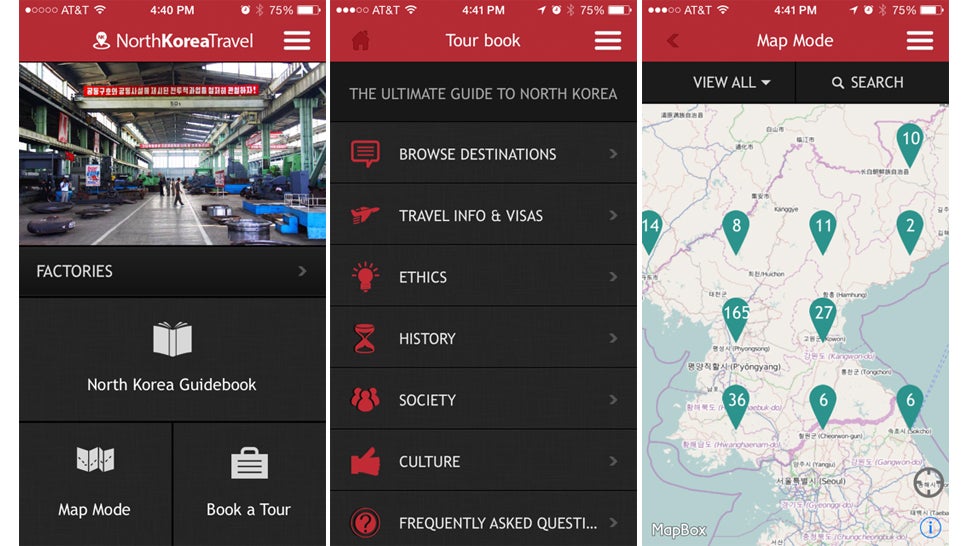 Honestly, though, the app is interesting even if you can’t make it above the 38th Parallel. According to its designers, the travel guide can “give you insider information on every single location you can visit in North Korea.” This seems like a dubious claim, but again, North Korea is a weird place. There are spots that are specifically designed to show off the best the country has to offer. Forced labour camps aren’t among them. Inevitably, though, even the pictures of bar interiors and strange factories are pretty fascinating. It’s worth noting that North Korea Travel is not the best-designed app — and it’s full of bugs — but it is full of interesting information, too.

So let your imagination run wild. For your convenience, we’ve put together a little weekend itinerary for a virtual trip to North Korea. And if you’re lucky, you might even get to go one day, though you probably won’t have as much freedom to choose the sights you’ll see.

Plan on arriving in Pyongyang, the capital of North Korea, by plane on Friday evening. That’s because there’s no other way for Americans to legally enter the country. Once you collect your things — minus whatever customs agents took out of your bags — you should head to the Yangakkdo Hotel. This 47-story tower is one of the most popular hotels for tourists, and there’s even a revolving restaurant on the top! Have dinner there, and then enjoy the hotel’s surprisingly luxurious amenities like a bowling alley, casino, and massage parlor. 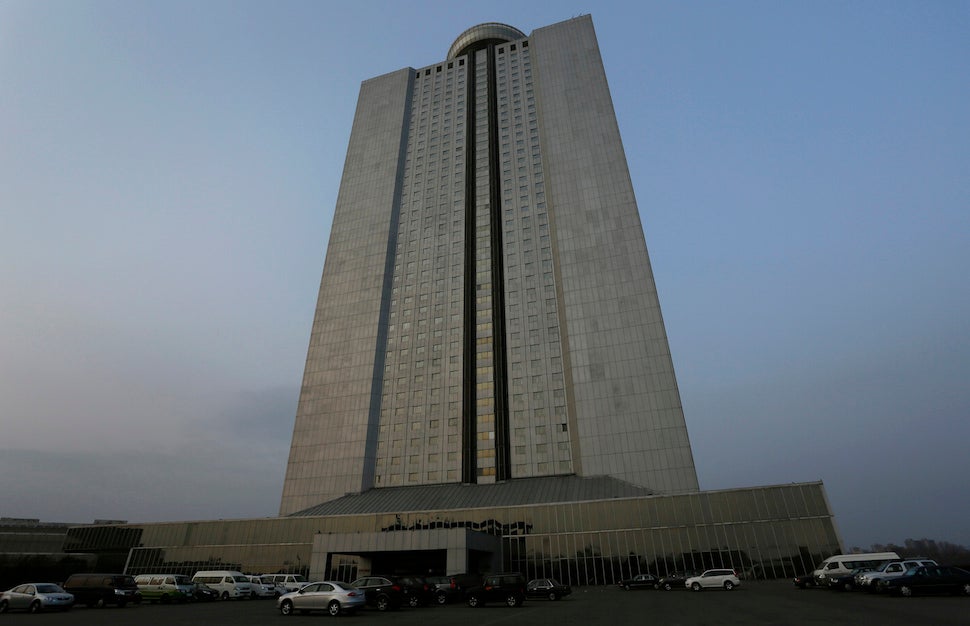 You’ll probably want to hit the ground running and start seeing the sights on Saturday morning. Kim Il-Sung Square is a natural first stop, probably because it’s the place you see on the news all the time. The massive square is often compared to Tiananmen Square, and can accommodate rallies of more than 100,000 people. Be sure to wave to the soldiers if see them!

Since you’re already in the mood for oversized public spaces, you might as well head to Mansu Hill next. This is home to a collection of attractions collectively referred to as the Mansudae Grand Monument and “is perhaps Pyongyang’s most iconic and well-known site,” according to North Korea Travel. It’s home to those many large statues, including the iconic, towering statues of Kim Il Sung and his son, Kim Jong Il, where you’ll likely see some North Koreans bowing. 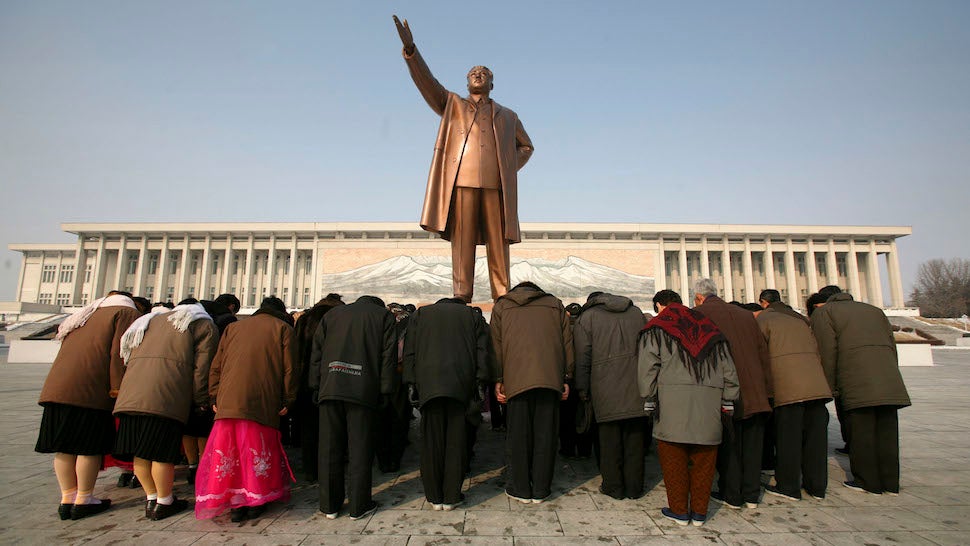 By now, you’re probably hungry. If you’re feeling brave, find your way over to the Tongil Street Sweet Meat Restaurant for a taste of the local fare. According to North Korea Travel, this place “is an interesting restaurant rarely visited by tourists or foreigners, mainly due to the cultural taboos surrounding the consumption of dog meat,” also known as “sweet meat.” It’s considered a delicacy.

While away the afternoon hours at the Victorious Fatherland Liberation War Museum. North Korea Travel calls this “Pyongyang’s most important museum and a must-see for any first-time visitor or anyone looking for an understanding of the pervasive anti-Americanism in North Korea.” The war in question is, of course, what we call the Korean War and is hugely important to the country’s ideology. Don’t miss the large 360-degree panorama “depicting the annihilation of an American battalion” at the end. When you leave, you’ll probably have a good chance to try out the world famous Pyongyang Metro, which you’ll surely find surprisingly ornate. 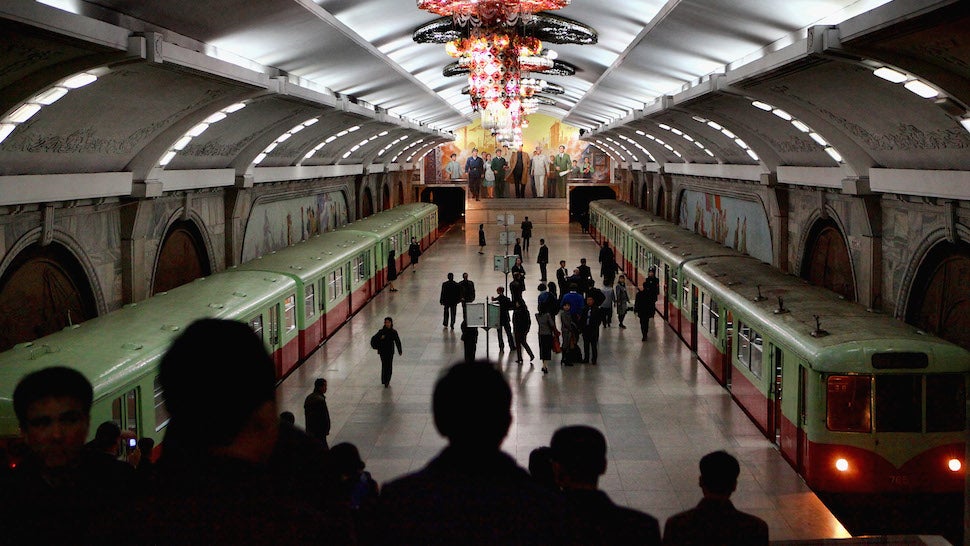 You’re probably hungry again, and since you’re feeling the national spirit, head over to the National Restaurant. Known for “a decor of plastic flowers,” this is a great place to find Korean BBQ and meats of all kinds. Top off your lunch of dog with a dinner of ostrich. When in Pyongyang!

After dinner, why not mingle with the locals a little bit at the Taedonggang Diplomatic Club. It will cost you a few bucks to get in, but according to North Korea Travel, “the karaoke bar has an excellent range of songs.” You can even take a class on everything from Korean musical instruments to computers. Probably not at night, though.

Since it’s such a short trip, you’ll need to make some choices about how to spend your last day in North Korea. You could leave Pyongyang for a trip to the Kangso Steelworks in Nampo, “one of the most important and iconic factories” in the country. It’s a surprisingly good place to see some art, including a double-sided mosaic of Kim Il Sung. You might also consider a trip to the Rajin Shoe Factory, where you can “wander around the factory floor” while workers make shoes that you can later buy. Apparently, “the drive to the factory provides an interesting view of the more impoverished areas of Rajin.” The demilitarized zone (DMZ) at the 38th Parallel is another obvious choice. There’s not much to see besides soldiers standing and staring at the border with South Korea, but it’s an important spot. 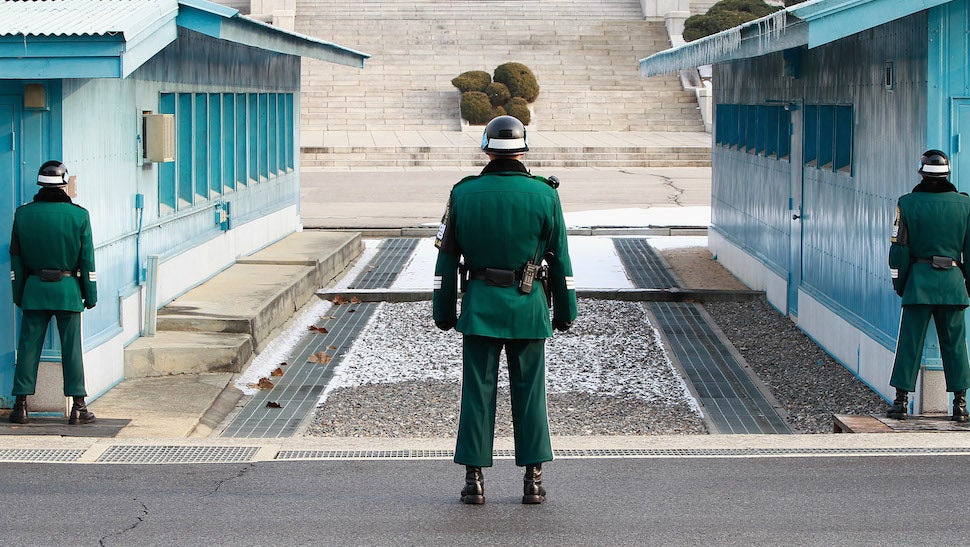 If you do decide to stay in Pyongyang, a buffet of choices awaits. American visitors should start with the USS Pueblo, “the only American military vessel in enemy hands.” It was seized by the North Koreans back in 1968 and now sits in the Potong River at the same place where another American ship was set ablaze by angry locals in the 19th century.

From there, make your way to May Day Stadium, where the famous Arirang Mass Games take place. This display of North Korean spectacle involves upwards of 20,000 school children who make up the backdrop to an extravagant performance that can involve as many as 100,000 people. In fact, the stadium itself is one of the largest in the world, capable of holding up to 150,000 visitors. North Korea Travel says the “average audience attendance, around 5,000 people, is dwarfed by the [show’s] 100,000 participants.” 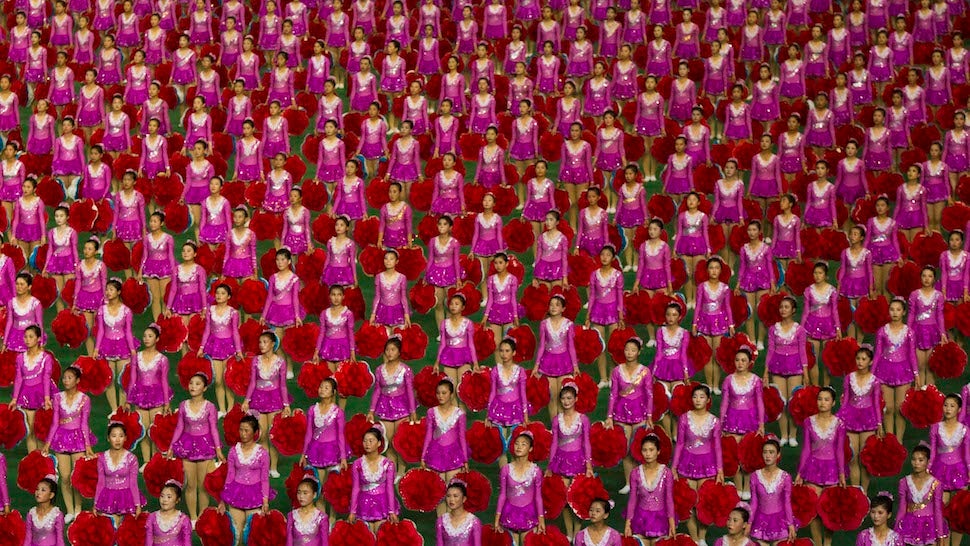 You’re probably ready for a taste of home, so swing by Italian Restaurant for lunch. According to North Korea Travel, the pizzeria “is notable for once being advertised on TV in Pyongyang.”

Depending on whether you got to see a show, you might have time for the Runga Dolphinarium, “home to the one and only Pyongyang dolphin show.” It’s a bit expensive with tourists paying as much as $US30 a ticket for a 20-minute show. But it’s certainly a unique experience — like Sea World with more authoritarianism. You can find an even more unique experience, however, with a visit to the Maternity Hospital. This self-explanatory attraction “is the best hospital in the country” and allows tourists not only to visit the wards but also the delivery rooms themselves.

Dinner on your last night is a no-brainer. Head straight to the Arirang at the Pyongyang Hotel, dubbed the best restaurant in town by North Korea Travel. It’s housed on the top floor of the first hotel ever built in Pyongyang. You might have trouble getting in, as it’s typically not a tourist restaurant, but if you do, you’ll enjoy a view of “one of the five advertising billboards in the city.” Stick around for drinks and catch a cab back to your hotel. Beware that you’ll have to take a local in the cab with you. Tourists aren’t allowed in taxi cabs by themselves.

As you leave, you’ll inevitably catch a view of the Ryogyang Hotel, a 105-story pyramid-shaped tower in downtown Pyongyang. You’ve probably seen it already, but this unfinished monstrosity makes for a good parting shot. It simultaneously stands for glory and for despair in a country that’s filled with pride but utterly lacking in some basic needs for many of its citizens. As North Korea’s leaders build skyscrapers and rattle sabres to show the world they’re strong, other North Koreans are starving. Of course, you’d never see or hear from them on your highly orchestrated tour. You’ll be too busy basking in the half-baked glory. Or trying to, at least. 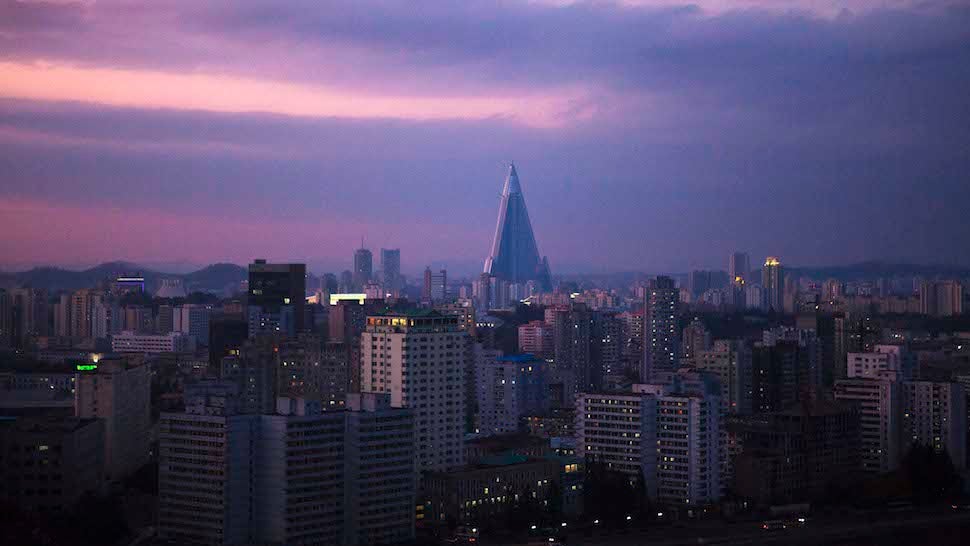