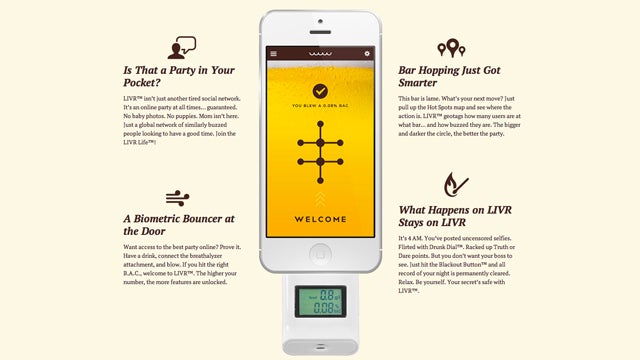 Yesterday, the developers of an app called LIVR began cold-calling tech writers. The pitch was fun! A social network you can only access when you're drunk, thanks to a breathalyzer accessory. If it seems like the platonic ideal of SXSW catnip, that's because it was engineered to be exactly that. LIVR is a hoax.

We were first contacted by LIVR yesterday morning in the form of a press release sent to our tipbox. Heaven forbid you ever be exposed to press releases in your lifetime, but suffice it to say LIVR's was convincing, full of the nextify 2.0 jargon that makes everyone hate Silicon Valley:

LIVR acts as a biometric bouncer to a global party. Before gaining access, users first must blow into a plug-in breathalyzer and demonstrate a minimum BAC (Blood Alcohol Content). All users on the network must achieve a minimal level of intoxication thereby guaranteeing that all users logged into LIVR at a given time are in a similar state of mind. As a user metabolizes their alcohol, they must drink more and re-check in.

The app included features like Drunk Dial™ (the trademark was a nice touch) which randomly connects two inebriated souls, and Truth or Dare, which "connects users to crowd sourced activities daring them to accomplish a task, earning LIVR points when they do." Crowd source. LIVR points. This all sounds about right.

The release finally pointed to the following (extremely well-produced) video, which looks exactly like every other social app-promoting video that has ever been released. Here are LIVR creators Kyle Addison and Avery Platz:

Since yesterday, LIVR has been picked up as authentic by Elite Daily, Pocket Lint, The Next Web, the Daily Mail and Engadget, among others, all of whom have presented it as authentic. It will get picked up by more, as the techblog echo chamber works its reblogging magic. Which is a shame, because, again, LIVR is a lie.

Let's assume for a second that an app that encouraged people to get wasted and make bad choices didn't violate at least one of the App Store's terms of service. Stranger things have happened. What's more telling is LIVR's claim that its breathalyzer attachment costs a mere five bucks. This is either impossible or insane. 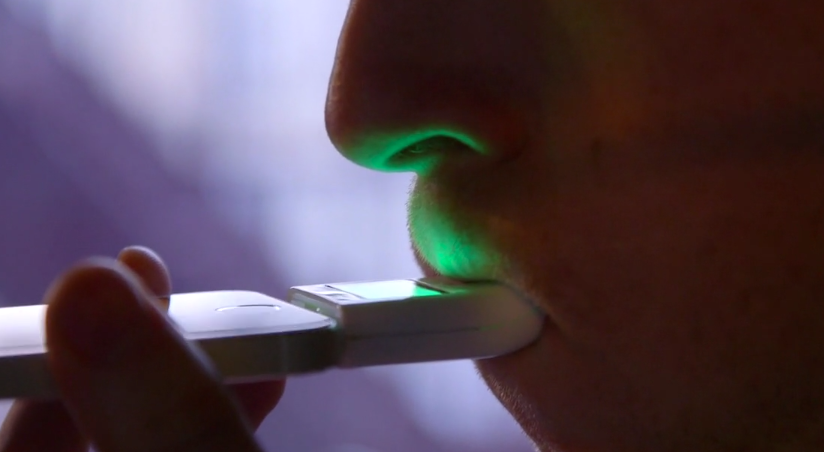 iOS breathalyser attachments do, in fact, exist. Lots of them, in fact! There's this one and this one that are real and this one that's crowdfunded and so on. What you'll notice that they all have in common is they cost much more than five dollars. Orders of magnitude more, in fact. This is because breathalysers that work with smartphones are difficult and expensive to produce.

Yes, startups sell hardware at a loss all the time. But five bucks is cheap enough to set off some alarms.

Also, according to the USPTO, nobody's got a trademark on Drunk Dial. Or LIVR, for that matter, although LivR + Plus was claimed back in 2007.

It's understandable if you're still on board with LIVR at this point. There have been far dumber start-ups that have found funding, and far more fanciful promises of cheap hardware. Sorry! Still fake. Just ask Kyle Addison and Avery Platz, LIVR purported co-founders and confirmed imaginary people.

A cursory Google search turns up no results for a programmer named Avery Platz (outside of recent LIVR coverage). There are a few Kyle Addisons out there, but none of the ones on LinkedIn seem to fit the profile. 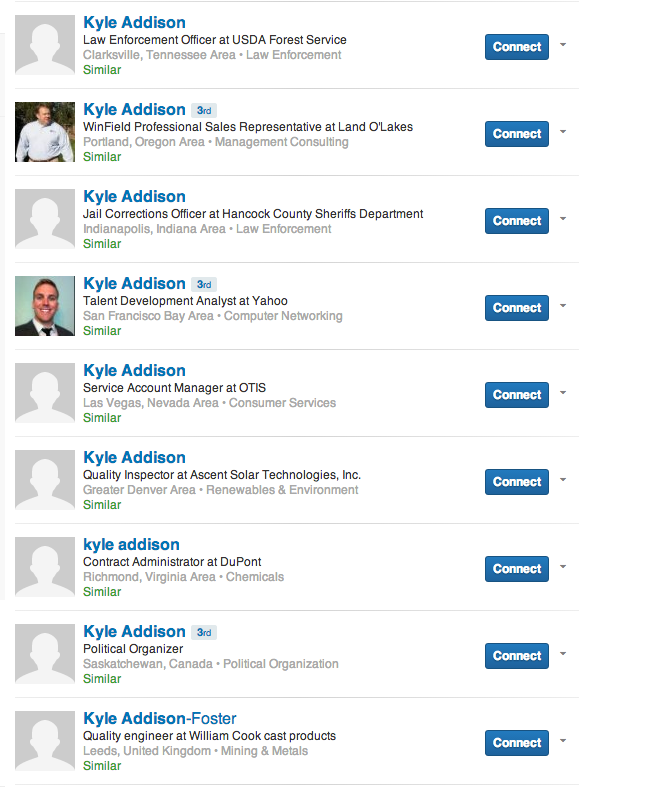 And it's odd that neither of these Web 3.0 movers and shakers appears to have a Twitter account.

It all makes a little more sense, though, when you realise that Avery Platz, lead programmer, is actually Matt Mayer, comedian. (Disclosure: Matt's an acquaintance from when we both performed at the Upright Citizen's Brigade in NYC. I haven't talked to him in a few years, and he didn't tip me off to this). 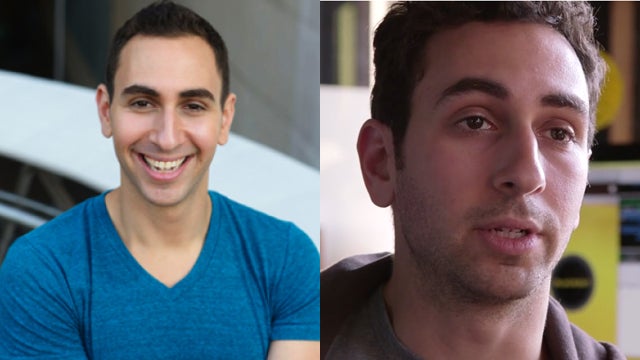 I'm not sure yet who's playing Kyle Addison, but safe to say he's also an actor.

So, yes! LIVR is a hoax. A well-produced, just-believable-enough hoax that's picking up steam at just the right time. The only questions left are... why? And who?

It's not clear who's behind LIVR, but a lot of effort has gone into making it seem legitimate. The video is slick, the website seems authentic, its Twitter and Instagram accounts look exactly like what you'd expect from a dudebro drunkswagger start-up. So who's responsible?

A domain search for livr-app.com shows that it was registered less than a month ago, but whoever did so used an anonymizing service, so no luck there. We've reached out to LVIR's email address and Twitter account, and to Mayer, to get a little more clarification on what the point of LIVR is, and who's behind it.

Regardless of why LIVR exists and who created it though, it's an admirable parody, a clever indictment of a start-up culture that's out of ideas and, increasingly, of the media that blindly covers it. I'll drink to that.