Despite the warm wood and cheery red accents, Smitten Ice Cream can feel a bit like a mad scientist's shop. There's the industrial-sized tank of liquid nitrogen that greets you inside the entrance of its new flagship location in Oakland. And there's the billowing clouds of nitrogen when the stainless steel ice cream machines churn out personalised scoops to order.

With Smitten's Oakland store set to open next week, Gizmodo went to visit and get the, erh, inside scoop on how these machines make some of the best ice cream out there.

I have to say I was sceptical when I first heard about Smitten's schtick, which just seemed like a way to differentiate itself from the other cultishly trendy ice cream shops in the Bay Area. (That there is more than one such ice cream shop perhaps says something about the San Francisco of 2014.) I've made liquid nitrogen ice cream before, and the lumpy result was, put charitably, no better than supermarket brands. It's kinda fun but definitely not worthy of cultish devotion. But when I tried the ice at Smitten's original San Francisco location, damned if it wasn't delicious and creamy.

In theory, liquid nitrogen is supposed to make the best ice cream because its extremely low temperature prevents the formation of large ice crystals — hence the creamier result. In practice, though, superchilling your cream causes it to stick to the cold steel bowl, creating those lumps I encountered stirring by hand. That's where Brr does its job.

The Birth of Brr 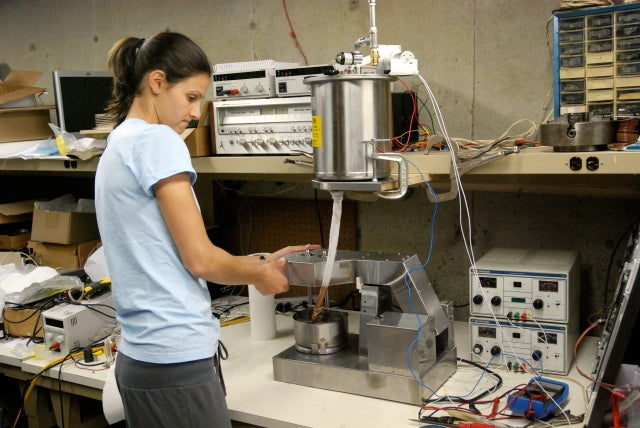 Smitten's founder Robyn Sue Fisher spent two years tinkering in a basement lab with a retired engineer to make Brr, the shop's patented ice cream machine. The breakthrough behind Smitten's ice cream is not really liquid nitrogen, but the little machine that stirs. "My first kid was Brr," jokes Fisher.

At first, they tried to tinker with existing mixers, but none were up to the formidable stirring. So they threw it all out and started from scratch. Fisher recalls looking at snow plows and aeroplanes for inspiration — machines that are already designed to prevent ice buildup. Oe of their earlier prototypes was "literally a snowplow that went around the snow." Ultimately, they settled on two helical stirrers shaped much like strands of DNA.

With a design in place, getting a handcrafted batch of customised machines manufactured was also no small (nor cheap) feat. "You could basically buy a car for the cost of a machine," says Fisher. To keep the machines running smoothly, she also has a team of seven engineers to call for help. Smitten has now expanded to two existing locations with two more slated to open soon, including the one I visited in Oakland. 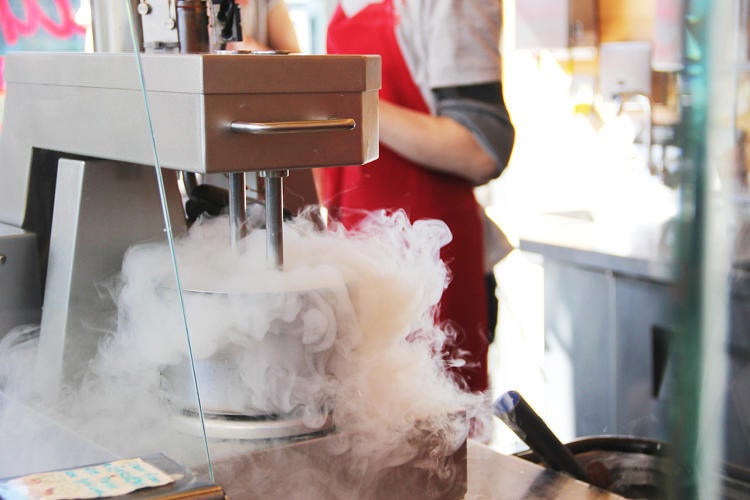 With the new stores, Smitten is also upgrading to Brr 2.0, which is more than the sum of its mechanical parts. It knows to stir every flavour a little differently because, for example, chocolate ice cream is more viscous than strawberry white balsamic.

Fisher doesn't have any plans to franchise the brand or make Brr for sale, so you'll just have to be in the Bay Area to judge the ice cream for yourself. But really, watching the machines go and getting ice cream made in front of you is half the fun. You can at least get a taste of that in the video below.