With spring finally in the air, it's time to grab your phone and go outside. No, not so that you can check your email on a hike, but because there are plenty of other ways that the little computer in you palm can actually make the outdoors more fun. We've rounded up some of the best stargazing, hiking, and wildlife apps right here.

This is a guide meant for the casual outdoor adventurer. It's easy to drop $30 on a souped up birding or mapping app, but you won't need all the premium features if you're not obsessively tracking your progress. All the apps in this roundup are under $5 or, better yet, free. I tested them all on an iPhone (because that's what I have, sorry!), but I've tried to find Android equivalents if a version isn't already available. 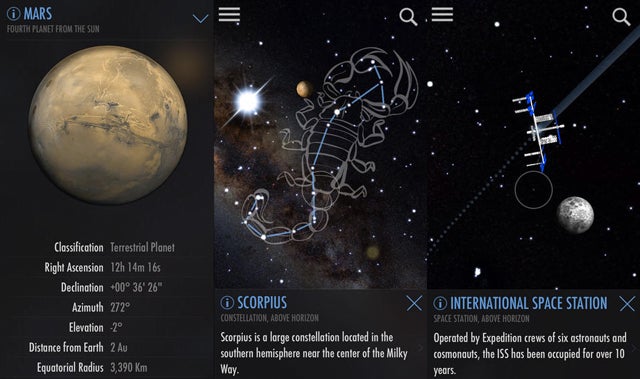 Hands down, this is my favourite app in this entire guide. It's beautiful, it's informative, and it really does augment rather than distract from gazing at the stars.

When you open up SkyView, you begin by flicking your wrist a few times to calibrate the compass. Then you hold it up to the sky and... it just works. As you move over different objects in the night sky, information about stars, planets, satellites, and galaxies appear on your phone. Constellation outlines appear, too, like creatures in the sky. You can also used it in night vision mode with red light, so that your phone doesn't blind your eyes.

A premium version of SkyView for $1.99 identifies even more stars and satellites. Sky Map seems a good choice on Android. 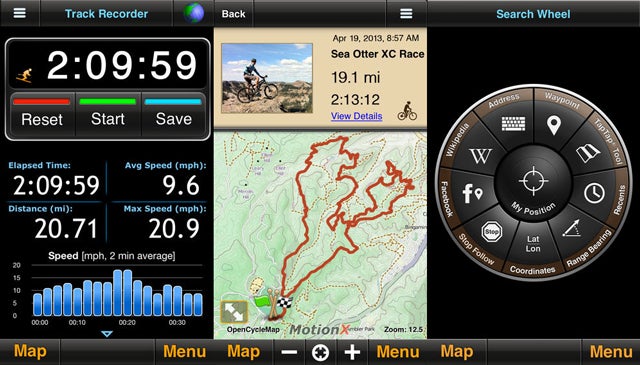 This trick of downloading offline maps from Google Maps is pretty neat, but if you want something more tailored to trails, MotionX-GPS ($1.99) has got your back. At its most basic, you can pre-download trail maps for trips out of cellular range. It also uses GPS to track your location, distance traveled, and elevation for a nice summary at the end.

MotionX-GPS does, however, have a slightly annoying default notification that tells you speed and distance covered every five minutes in a robotic female voice. (This is especially annoying if you happen to be taking a break, and your phone chooses to remind you you're going at 0 miles per hour.)

I like EveryTrail (free) for a different reason — it's great for exploring and finding trails nearby. It lets users upload their tracked hikes, so it has a large user-generated database of trails with maps, photos and ratings. I did, however, sometimes got wildly inaccurate distance and elevations readings with it. EveryTrail is also available on Android, and EveryTrail Pro ($4.49) has got more features. 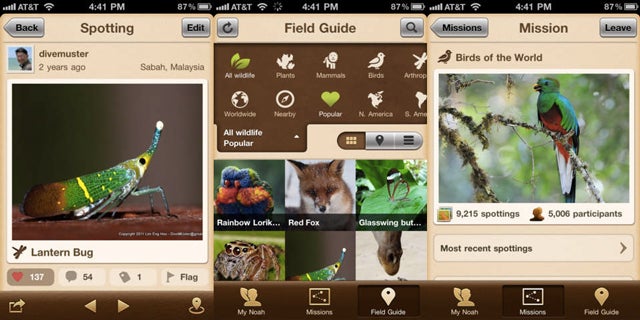 Want to do some science? Just take a hike with Project Noah in your pocket. The citizen science initiative lets anyone and everyone be the eyes and ears of scientists tracking thousands of species around the world. You can join "missions" to report spotting of, say, all the birds in your local area, and earn badges as you contribute. If you're unsure about the species, you can upload a photo and metadata for others to identify. Project Noah is free on iPhone and Android.

While the app contains plenty of information found in field guides, it is not tailored to help you identify animals or plants right away. If that's what you're after, keep scrolling. 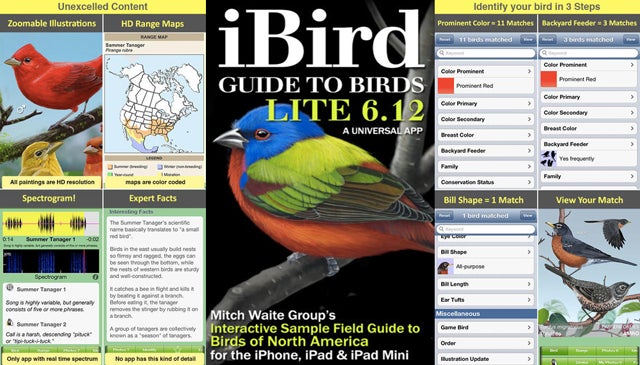 The world of birding runs vast, obsessive, and deep, but if you're just a a birding dilettante, this basic free app available for both iPhone and Android is the one for you. When you spot an unknown bird, you start keying in attributes like location, size, and colour to narrow down the possibilities. You can also just browse through the species, which are all accompanied by colour photos, song recordings, and pages of identifying informations. Of course, there are pro versions of iBird with many more birds and many more features should you feel the need.

I also tried out BirdSongId, which had a tantalising feature of recognising birds from songs you record and upload. In practice, though, it requires a high quality recording that you're unlikely to get out in the wild with multiple birds chirping at once.

You are better off with a guidebook, a knowledgeable friend, or even nothing at all. Perhaps the worlds of wildflower enthusiasts and mobile app developers do not much overlap, but I did not come across any plant identification apps that 1) actually identified plants and 2) did not crash.

The least bad app might be Audubon's Wildflowers app ($3.32). Like all of Audubon's solid field guide apps, it is packed with information but the interface is a bit ugly and hard to use. Unlike Audubon's other apps, though, Wildflowers wouldn't consistently open without crashing, which doesn't seem worth $3.32.

Leafsnap, which got a lot of press when it debuted in 2011, has the intriguing premise that it can identify plants from an iPhone photo. But you have to pluck a leaf and put it against a pure white background, which isn't always practical while out on a hike. And you need an internet connection, which is even less practical. Ultimately, if you can build a plant identification app that works and doesn't crash, your competition is pretty weak.

Do you have a favourite nature app we didn't mention? Let us know in the comments, especially if it's a non-sucky wildflower identification app.